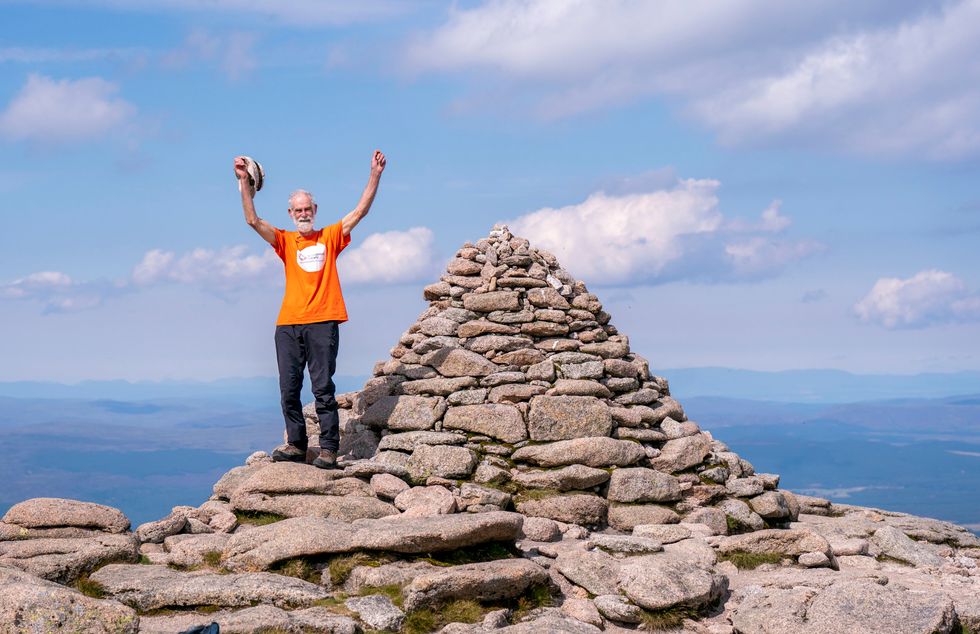 An 82-year-old man has climbed the final mountain in his challenge to bag all of Scotland’s 282 Munros.

Nick Gardner was greeted with a piper and a guard of honour of walking poles from fellow climbers who cheered him as he reached the summit of Cairn Gorm on Saturday.

The grandfather-of-four has spent the last two years making it his mission to climb all of Scotland’s highest peaks, since his wife, Janet, had to go into full-time care.

Speaking to the PA news agency at the final summit with a glass of prosecco in one hand and a dram of whisky in the other, he beamed: “I am just feeling elated.

“Words don’t exist to describe how I am feeling.

“I’ve climbed many mountains, but I have never had a day like this in my life before.

“Not many people get to experience a day like this.

Mr Gardner, from Gairloch, in the north-west Scottish Highlands, said he felt life was over when Janet, 84, had to move into a care home after developing Alzheimer’s and osteoporosis.

Throughout his epic adventure across Scotland, which he started in July 2020, three months after his 80th birthday, the intrepid pensioner has been raising money and awareness for charities Alzheimer’s Scotland and the Royal Osteoporosis Society.

His JustGiving page has smashed its original target of £10,000, and has now raised almost £60,000, with donations still flooding in.

The challenge culminated in Mr Gardner climbing his final peak surrounded by an entourage of about 150 friends, family, fellow climbers and loyal fans he has met along the way, wearing  bright orange and purple t-shirts promoting both charities.

Getting emotional, Mr Gardner added: “I am very excited because what I wanted to do was complete this challenge, but also increase awareness of these two diseases, and the work these charities do, and I’ve gone and done it.

“The fact that I’ve made the public more aware of these diseases, that’s the real success to me.

“I am just so happy that a lot of people think I can be of help to them.

“I’ll admit the initial impetus was to do this challenge for me.

“I felt so helpless when Janet went into care, and I knew I needed to combat that, and that I needed a project to keep me going.

“But to have been able to help these charities, help raise awareness, and help others, it feels incredible.

“It’s made me feel very emotional, with them all coming to help me today to do this final climb.

When asked if there’s another hike in the pipeline, Mr Gardner replied: “I just like being in mountains, so I will carry on doing it, not to the same intensity, but I will carry on. This certainly isn’t the last one.”

Craig Jones, chief executive of ROS, who visited Cairn Gorm on the day of Mr Gardner’s final climb, said the money raised will go towards research.

He added: “Nick is one of the most impressive fundraisers in the history of our charity, we are so proud of him.

“He’s a real inspiration, he’s made us realise that when we get a bit older, we don’t need to give up on things, in fact we can throw ourselves into big challenges and really trailblaze on things that we might never have dreamt of when we are younger, so he is living proof and an inspiration to all of us.”

Fellow climber Douglas McKeith, who climbed 85 Munros with Mr Gardner over the last two years, said the day had been emotional for many.

“I have become close to Nick since doing some of his challenge with him,” he said.

“He’s a member of our climbing club JMCS Glasgow, and we’ve almost had our own journey within his journey.

“It’s been great seeing him do it.”

One of Mr Gardner’s two daughters, Sally McKenzie, has nominated him to Guinness World Records for the oldest person to climb the Munros.

To donate to Mr Gardner’s cause, visit https://www.justgiving.com/team/nicks-munro-challenge.

Please log in or register to upvote this article
charityScotland