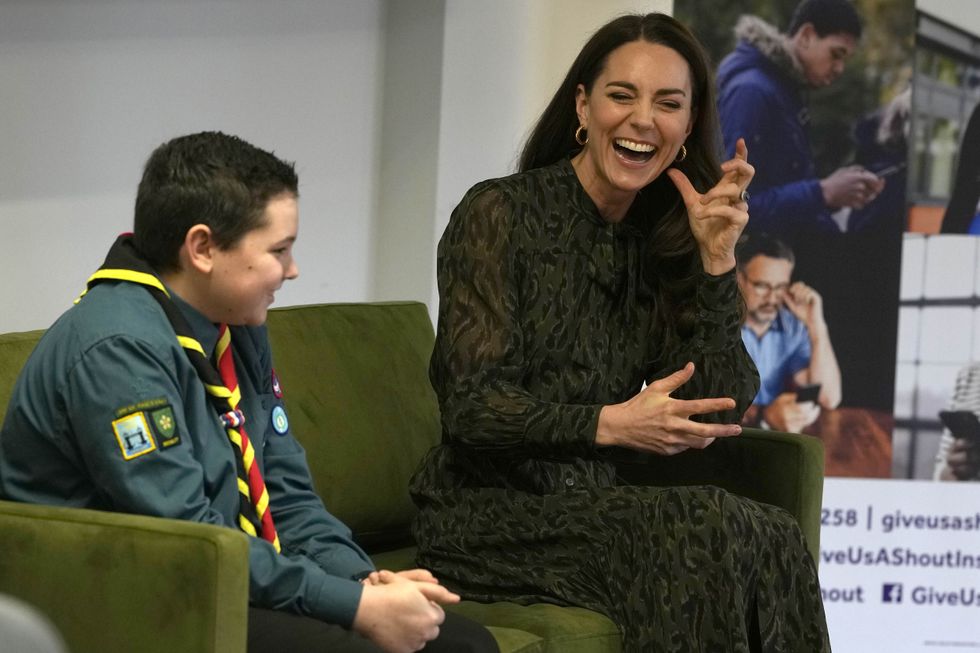 The Duchess of Cambridge has praised an “inspiring” teenage Scout who raised more than £8,000 for mental health text service Shout by sleeping outside in a hammock for a year.

Kate met 13-year-old Leo Street after he braved temperatures as low as -5C in his garden to raise money for the crisis support charity.

The duchess, who is joint president of The Scout Association, joked: “There really isn’t a big enough Scout badge for that.

“What you achieved is really inspiring.”

She added: “You must have had some impressive kit to keep warm.”

Kate, wearing a £355 khaki green leopard print dress by US designer Derek Lam, was visiting Shout 85258 in London to mark its milestone one million conversations.

She and the Duke of Cambridge helped establish the text messaging support service for those struggling to cope in 2019, with a £3 million investment from their Royal Foundation.

Leo, from Swanley, Kent, slept under a heavy-duty tarpaulin to protect himself from the extremities of the weather.

He told the duchess his next fundraising adventure will be to cycle to Scotland during half term.

Analytics expert Mark Ungless shared data with Kate that showed children as young 13 and under accounted for 8% of Shout’s texts, mostly between 10pm and midnight.

“I told the duchess we were surprised by the number of very young people reaching out and the time too. It needs addressing,” he said.

Use of the platform has jumped by 140% since the start of the pandemic, and Kate was told of the need for more volunteers to meet the growing demand.

The duchess heard how conversations taking place can be used to provide insights on mental health in the UK, with suicide (34%), depression (32%) and anxiety or stress (31%) being cited as the main reasons why texters have sought support.

She viewed a live demonstration of the platform before joining a small group of Shout volunteers to hear about their experiences of helping those in distress.

Shout is the UK’s only 24/7 text messaging support service and offers confidential help to anyone struggling with their mental health.

It is free to start a conversation by texting SHOUT to 85258 from all major mobile networks in the UK.

The service was William and Kate’s first major project with the Duke and Duchess of Sussex, and was launched in May 2019.

The couples were dubbed the fab four, but Harry and Meghan split away from the Cambridges’ Royal Foundation a month later to set up their own charitable organisation before quitting as senior working royals in 2020.