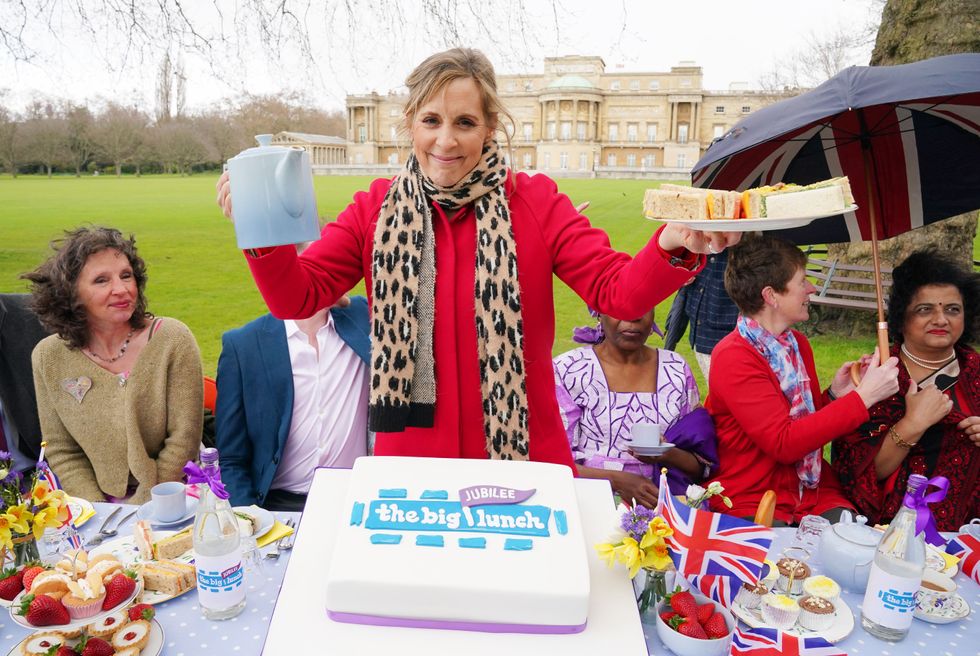 Mel Giedroyc has hailed a group of Big Jubilee Lunch organisers as “gritty, positive and life-affirming” ahead of the nationwide event marking the Queen’s Platinum celebrations.

The comedian and broadcaster, 53, was joined by 10 community organisers from across the UK for an event in the gardens of Buckingham Palace.

Sat at a trestle table, the group shared ideas about feeding local communities on a budget, games to play in large groups and how best to decorate their streets.

The Big Jubilee Lunch, which first took place for the Diamond Jubilee in 2012, sees people across the country sit down together for food, drink and conversation.

This year it will run between Thursday June 2 and Sunday June 5 after the Queen made the initiative an official part of her Platinum celebrations.

After attending the lunch, Giedroyc told the PA news agency: “These are people who are absolutely the rocks and pillars of our communities.

“I have come away on a bit of a buzz because it is so easy these days to just think the world is a really bad place.

“We are all on our news feeds the whole time and it is just this awful stuff coming through, whether it is to do with Covid or Ukraine or whatever it is.

“And actually, it is really nice to take a couple of hours out in the morning to be with people like this.

“They are gritty, they are positive, they are life-affirming, and they are doing these amazing things in their community – and that is what we are celebrating.

“I was very honoured to be invited to be there with them. It was hilarious. The bants (banter) were very strong around the table.”

Former Great British Bake Off co-host Giedroyc, who also attended the 2012 event on The Mall in London, said she believes “we need each other at the moment”.

She added: “To celebrate community and living close by our fellow human beings is a really, really important thing.”

The group included Imtiaz Ali, in his 40s, who has lived on the same street in Stoke Newington in north-east London all his life, and who has been organising events since the initial Big Lunch scheme began in 2009.

Also present was Nureen Glaves, 37, from Shepherd’s Bush in west London, who runs Feed Me Good, a start-up community organisation supporting people to shop, cook and eat well on a budget.

She is planning two Big Jubilee Lunches over the course of the celebratory week.

Other attendees travelled from Northampton, Aberdeen, Fermanagh and Penzance.

Peter Stewart, executive director of the Big Lunch, said: “The Big Lunch has been bringing neighbours and communities together on the first weekend in June for over a decade and what an extra special year 2022 is going to be.

“We know that good things happen when people come together and so we want to invite everyone everywhere to take part – that’s what makes the Big Jubilee Lunch big.

“With only two months to go until a once-in-a-lifetime event, now is the time to gather your neighbours, rally your road, and get ready to celebrate this historic moment together.”

The Duchess of Cornwall has been patron of the Big Lunch since 2012.

More information and a free Big Jubilee Lunch planning pack is available at its website.

Please log in or register to upvote this article
RoyalThe QueenVideo