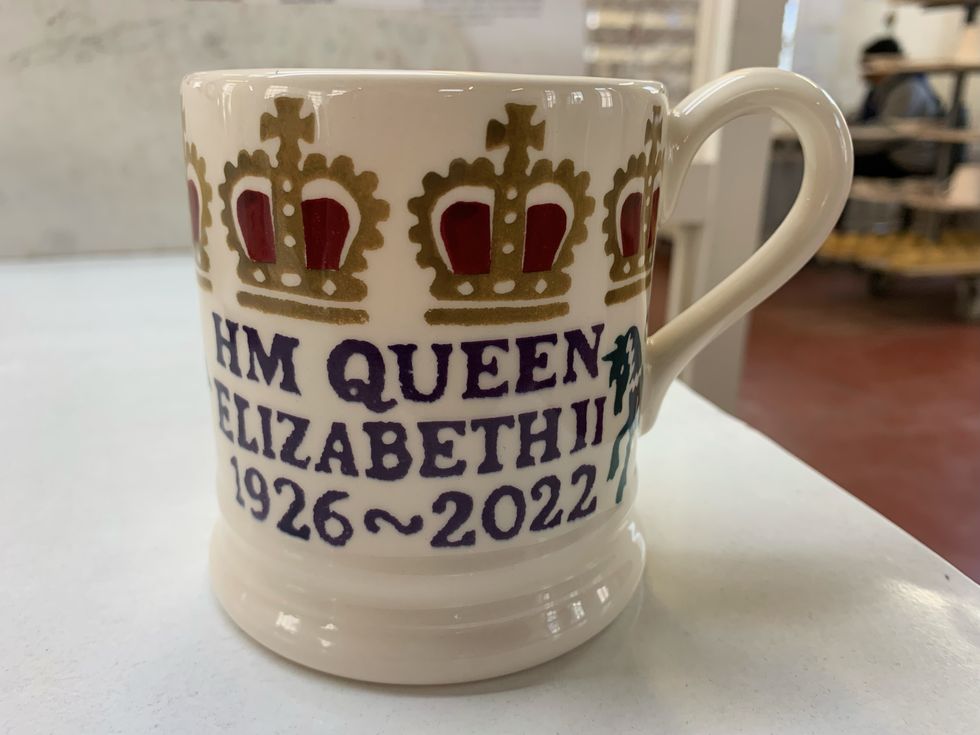 A pottery with strong royal connections has launched hand-painted commemorative mugs marking the death of the Queen.

Staff at Emma Bridgewater, who have begun painstaking work on the pieces, have spoken of their “honour” at being chosen for the task, as the nation mourns after the death of Queen Elizabeth II.

The factory in Lichfield Street, Stoke-on-Trent, Staffordshire, has close ties with the royal family.

In 2015, the now Princess of Wales, Kate, visited the works.

Two years later, the future King Charles III, on a tour of Stoke-on-Trent and Middleport Pottery, unveiled a plaque designed by Emma Bridgewater commemorating his visit to the then Prince’s Trust in Hanley.

Charles and the Queen Consort, then the Duchess of Cornwall, also visited the works in 2010.

The factory has been creating porcelain designs marking important royal events for years, including most recently for the Queen’s Platinum Jubilee earlier this year.

The then Duchess of Cambridge, Kate, walks with Emma Bridgewater and her husband Matthew Rice, during a visit to the factory in 2015 (Oli Scarff/PA)PA Archive/PA Images - Oli Scarff

Since the announcement of the Queen’s death a week ago, collectors have been eager to have a memento marking the loss of Britain’s longest-reigning monarch.

In response, designers have produced two sponge-printed motifs, both incorporating the heraldic lion and unicorns from the royal crest, the Tudor rose and the Imperial State Crown.

One bears the name of the monarch, while the other can be personalised with a message.

Stephen Beeston, head of production at the pottery, said: “This is something we first started producing this morning.

“We produce everything by hand… and this is decorated by hand.

“These designs are done by the design department – we then have to cut the sponges out.

“We then apply those (sponges) on to the biscuit (the un-fired pottery mug).

“That’s one of the advantages – this process is very responsive,” he said, adding the mugs went from “design, to kiln and into distribution” in only a couple of days.

When production reaches full tilt, up to 1,500 a day can be made, with a single sponge-painter getting through up to 30 an hour.

The base mark on the commemorative mugs (Richard Vernalls/PA)

“We have an initial plan to do 5,000 and then we’ll just monitor sales from there,” he said.

He added: “This is a tradition in the pottery industry, that we have always made commemorative pieces to mark all sorts of royal occasions.

“We commemorated the Silver, Golden, Diamond and of course earlier this year, the Platinum Jubilee.

“Today, we’re marking and recognising the long service of the Queen to this country and the Commonwealth.”

He said the factory’s ties with the royals made staff “pleased and proud”.

It had been a “difficult and challenging week” for the workforce, but the current production run “has given us an opportunity to say thank you (to the Queen), thank you for being an inspiration and an example for everybody”.

Rachel Matthews, a sponge-painter who has worked at the pottery for 10 years and met Kate during her visit, was applying the design to unfinished mugs.

It's been a very sad and strange week

Mrs Matthews described the trickiest part of the process as applying the ‘Queen Elizabeth II’ writing, which is cut on to one sponge, to the curved side of the mug without smudging the paint.

“The first time I did that, it was quite nerve-racking,” she added.

Of the Queen’s death, she said: “I felt quite emotional, it hit me more than I thought actually.

“Even though we didn’t know her personally, it feels like it we’re all affected in some ways.

“It’s been a very sad and strange week.”