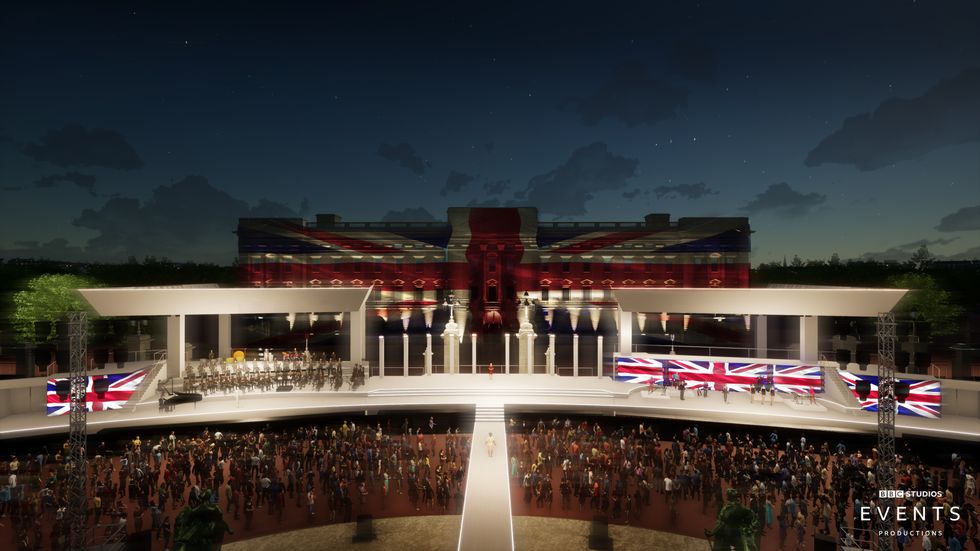 The concert will be held at Buckingham Palace (BBC/PA)

Queen + Adam Lambert will open the BBC’s Platinum Party At The Palace concert with a special performance marking the Queen’s 70 years on the throne.

It will come 20 years after guitarist Brian May performed God Save The Queen on Buckingham Palace’s roof during a show marking the Golden Jubilee in 2002.

“Then there was a moment when I wondered.. after Buckingham Palace roof where can you go? Well… you will see!”

The evening will also feature appearances from sports figures and stars of the stage and screen.

Fresh from coming second at Eurovision in Italy, Sam Ryder will also perform live, while there will be a pre-recorded performance from Sir Elton John.

Dance troupe and Britain’s Got Talent winners Diversity will also make an appearance.

The event will conclude with a performance by soul legend Diana Ross – her first UK live performance in 15 years.

She said: “I have had the honour of meeting the Queen many times throughout my life, including when I was with my family.

“Her Majesty has and continues to be such an incredible inspiration to so many across the world and I was absolutely delighted to receive an invitation to perform on such a momentous and historic occasion.”

The evening will highlight global themes that have emerged or evolved during the the Queen’s reign including British and Commonwealth contributions in the fields of fashion, sport, the environment, pop music and musicals.

The latter section will be curated by Andrew Lloyd Webber and feature a special appearance by Hamilton creator Lin-Manuel Miranda plus performances featuring the casts of The Phantom Of The Opera, Hamilton, Six, The Lion King and Joseph And The Amazing Technicolour Dreamcoat.

Coverage will be led by Kirsty Young and Roman Kemp with 22,000 people attending, with 10,000 tickets allocated in a public ballot and 7,500 for key workers, members of the Armed Forces, volunteers and charity workers.

Charlotte Moore, the BBC’s chief content officer, said: “We are thrilled to be bringing the nation together for this incredible, once in a lifetime event, broadcast live across the BBC with an amazing star-studded line-up of performers to celebrate the Queen’s momentous 70 years on the throne.”

Further details and additional artists will be confirmed closer to the event.