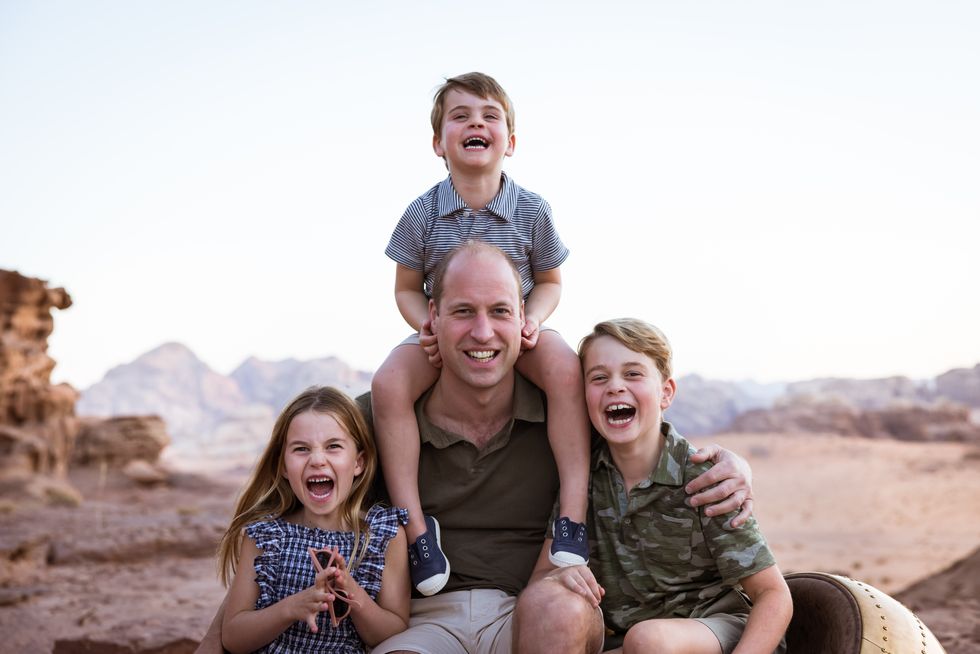 The Queen, the Prince of Wales and the Duke of Cambridge have released heartwarming family photographs through the ages to mark Father’s Day (Kensington Palace/PA)

The Queen, the Prince of Wales and the Duke of Cambridge have released heartwarming family photographs through the ages to mark Father’s Day.

William issued a picture of himself beaming and surrounded by his children on a holiday in the Middle East, while the Queen and Charles shared old photos through their official Twitter accounts.

Kensington Palace said the duke’s photograph was taken in Jordan in autumn 2021, and the family are pictured with a rocky, sand-coloured backdrop.

A smiling William is shown with his arms around Prince George, eight, and Princess Charlotte, seven, while four-year-old Prince Louis sits on his shoulders.

All the children have cheeky grins.

The duke and his eldest son are wearing casual, khaki-coloured outfits, and the younger children are dressed in navy and white tops.

Wishing all of our followers a very happy Father’s Day. 📸 The Queen (then Princess Elizabeth) with her father Ki… https://t.co/XtdylURATU
— The Royal Family (@The Royal Family) 1655625246

Meanwhile, the Royal Family official Twitter account shared a photograph of a young Queen smiling as she stands in a garden facing her father, King George VI, in 1946.

The monarch is wearing a long, patterned summer dress while her father, who died in 1952, sports a suit and tie.

The photograph was shared with the words: “Wishing all of our followers a very happy Father’s Day.”

Charles and his wife, the Duchess of Cornwall, shared three family photographs with the words: “Wishing everyone a very happy Father’s Day”.

The first is a black-and-white image of the prince in high spirits with his father, the Duke of Edinburgh.

They are dressed in military uniform, and Charles is glancing sideways at a grinning Philip.

A second image shows Charles wearing knee-high red socks and a kilt, lying on a lawn, with William and Harry as children.

A young William is wearing a white shirt and has his arm around his father, while Harry is sporting a green sweater and matching green wellies as he leans on Charles.

They are dressed formally, with the smiling duchess in a long, gold-patterned jacket and headdress while her father, looking more serious, wears a suit with a sand-coloured waistcoat.

In Kate and William’s photograph, the children appear in high spirits, reminiscent of Louis’ mischievous antics at the Platinum Jubilee Pageant, which won the hearts of the nation.

The young prince pulled faces as he sat on the laps of members of his family to watch the show.

He let out a howl and clapped his hands over his ears on the Buckingham Palace balcony during the RAF flypast on Thursday June 2, as his “Gan Gan”, the Queen, told him what was happening.

The Cambridges also used a photograph from Jordan for their official Christmas 2021 card.

The image showed William sitting on a gold pouffe next to Kate, with the two eldest children next to them, while Louis sat on what appeared to be a sheepskin rug at his mother’s feet.