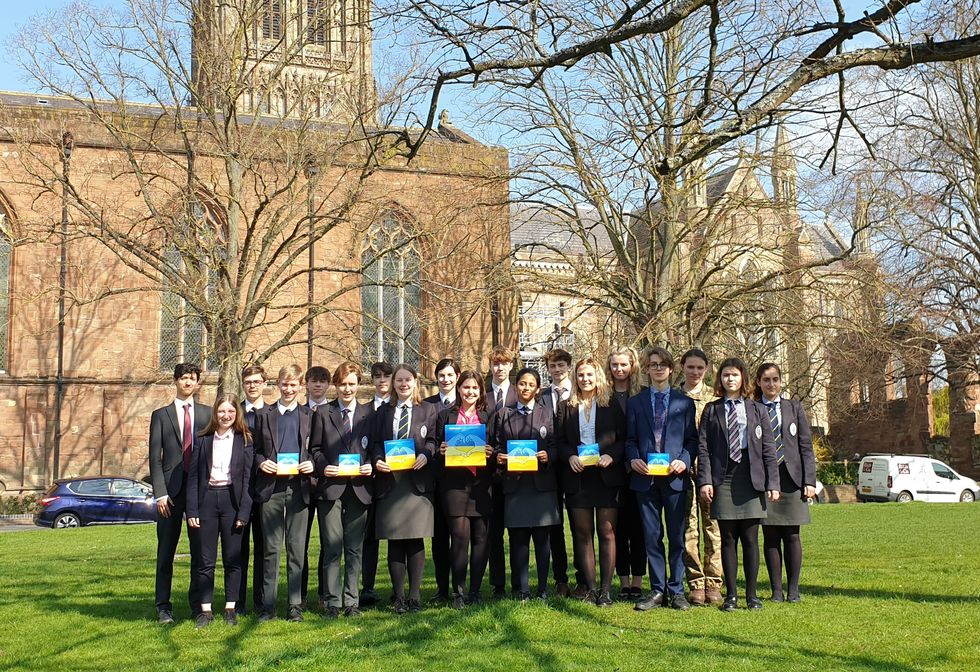 A school choir has released a charity single in Ukrainian to “send a message of hope” and raise funds for people affected by the Russian invasion.

Pupils from the King’s School chamber choir in Worcester, Worcestershire, have released a recording of the song Shchedryk, written in 1916 by Ukrainian composer Mykola Leontovych, after having learned the song in just 30 minutes.

All the proceeds from the single’s downloads will be donated to help provide essential funds for those in Ukraine via the charity Save the Children UK and the Disasters Emergency Committee (DEC).

Pupils from the King’s School chamber choir in Worcester, Worcestershire, have released a recording of the song Shchedryk (King’s Worcester School/PA)

Soloist Sophie Lloyd said it is an “honour” to be part of the single and added she hopes the song will represent support for war-torn countries worldwide.

“Despite the short notice of being asked to be involved, we all put our heart and soul into this as we know it is for such an important cause,” the 18-year-old said.

“The single release doesn’t just give hope and support to those in Ukraine, but also to those at war in other countries too.

“It was a real honour to be part of this and to be able to reach out to so many people across the world and give them a little bit of hope to just keep going.”

A video of the choir performing Shchedryk was made during the school’s Ash Wednesday service on March 2 and was sent to schools in the Ukrainian capital city of Kyiv to “show solidarity”.

This week our Chamber Choir have released their version of ‘Shchedryk’ as a charity single to raise funds for Ukrai… https://t.co/kzuTUlMezr
— King's Worcester (@King's Worcester) 1648140578

The song’s title Shchedryk is derived from the Ukrainian word shchedryj, which means bountiful, and was originally a folk song to herald the coming of spring.

It tells the tale of a swallow flying into a household to proclaim the plentiful year that the family will enjoy, but was composed and performed during a previous time of intense political struggle and social upheaval in Ukraine.

The school’s director of music, Simon Taranczuk, who helped organise the event said the students’ performance is a “message of goodwill” to those going through a “time of desperation”.

Mr Taranczuk’s great-grandfather was from Kyiv and his father has origins in Ukraine and Poland, having lived on the border during the Second World War.

“Amidst the ongoing conflict in Ukraine, the message that we send to those in a time of desperation is so important,” he said.

“By releasing this single pupils wanted to do something that sends a message of hope, love and goodwill from our community to all those in Ukraine.

“We hope the single spreads far and wide and we are grateful to all for their support in listening to and sharing the single.”

The school has already raised more than £6,500 from charity days organised by the pupils, that included them wearing yellow and blue clothing, running cake sales, putting on concerts and some of the sixth-formers donating the salaries from their part-time jobs.

For more information and to access the fundraiser, visit: www.justgiving.com/fundraising/kswcommunityukraineday.

Please log in or register to upvote this article
UkraineWorcester