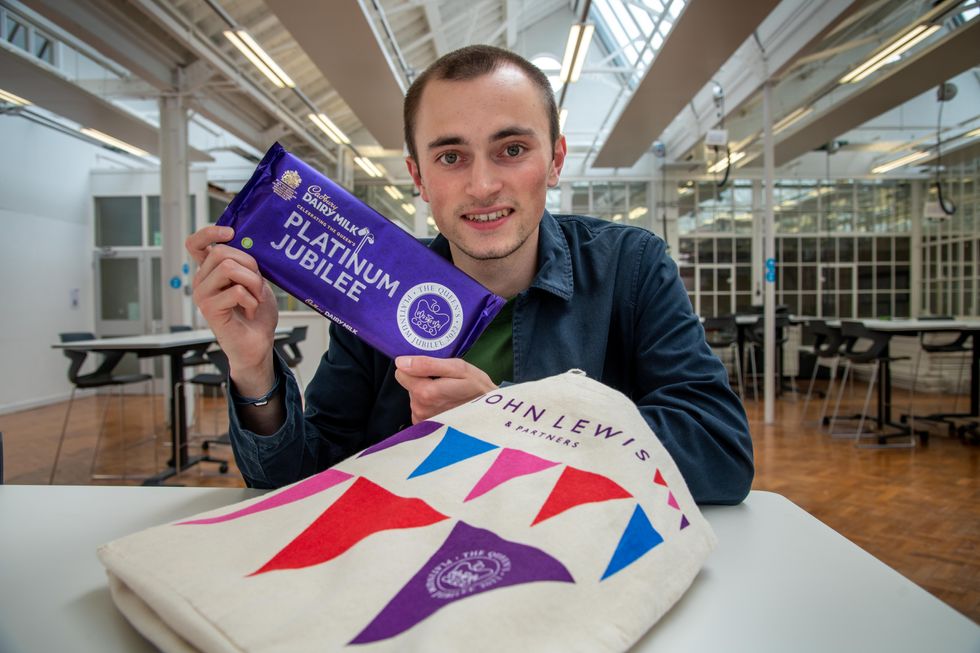 The student who designed the official Platinum Jubilee emblem has said it is a “pleasure” to see his creation on everything from London buses to chocolate bars and coins.

Graphic design student Edward Roberts, from Southwell, Nottinghamshire, also said he feels “honoured” to have been invited to the official celebrations on the bank holiday weekend.

The 19-year-old’s design was selected as the winning entry in The Queen’s Platinum Jubilee Emblem Competition, run by the Victoria & Albert Museum in conjunction with Buckingham Palace.

The logo is emblazoned across trains, champagne bottles, teddy bears and even deck chairs.

Souvenirs from the Royal Collection featuring the emblem, such as mugs, tea towels and umbrellas, have proven so popular that the merchandiser has temporarily suspended orders due to “unprecedented demand”.

Mr Roberts, who has just finished the second year of his graphic and communication design degree at the University of Leeds, said: “To see my design used throughout the country, and further afield, is a pleasure”.

Visit our website for a full rundown of how to celebrate this historic milestone: https://t.co/YcFJxj8kBx #PlatinumJubilee
— The Royal Family (@The Royal Family) 1653572508

The teenager’s purple and platinum-coloured logo features a stylised crown, incorporating the number 70, on a round background similar to a royal seal.

A continuous line drawing, it symbolises the Queen’s long reign.

Mr Roberts said: “I wanted the design to be scalable and I’m glad it carries itself when on a Cadbury chocolate bar, all the way to the size of a London bus.

“The most unexpected item I have seen the emblem applied to is the coins which will be used for the Wimbledon Singles Finals coin tosses. Being a tennis fan myself, it was lovely”.

Mr Roberts added that he appreciated receiving a huge number of Cadbury’s Dairy Milk bars as he is “partial to some chocolate”.

He said: “The competition has brought with it exciting opportunities, and I feel privileged that my work has received such a warm reception”.

Young creatives were set the challenge of summing-up the Queen’s 70-year reign with their artistic skills, with the winner chosen by a panel of industry experts.

The teenager said his mother burst into happy tears when the Lord Chamberlain, Baron Parker, the most senior official in the Queen’s royal household, told him via Zoom that he had won.

Mr Roberts has also worked with the Royal Collection Trust to design an additional emblem of the UK’s national flowers in the same style as his winning Jubilee entry.

The continuous line drawing traces the outline of a rose for England, a daffodil for Wales, a thistle for Scotland and a shamrock for Northern Ireland.