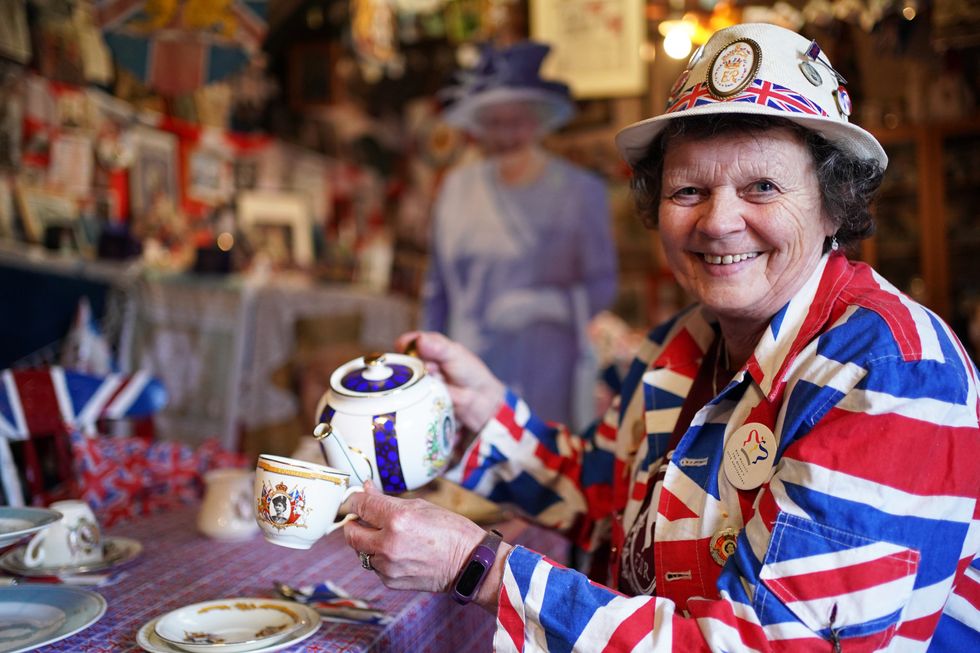 Anita Atkinson, 65, has more than 12,000 items of royal memorabilia on display in a converted dairy on her farm in Weardale, County Durham (Owen Humphreys/PA)
PA Wire/PA Images - Owen Humphreys

An ardent royalist has said history will remember the Queen as “Elizabeth the Great”.

Anita Atkinson, who has more than 12,000 items of royal memorabilia on display in a converted dairy on her farm in Weardale, County Durham, said the celebrations for the Platinum Jubilee will be the best yet.

And the public have recognised that “the ship of state sails on”, despite personal tragedy and family scandal, the 65-year-old superfan said.

Mrs Atkinson, who gives talks about the monarchy, told the PA news agency: “Our Queen is only the sixth female monarch in 1,000 years of history.

“This reign will go down in history as Elizabeth the Great.”

She said she would have loved to be in London for the long weekend of celebrations in June, but instead will be helping run a pop-up royal tearoom in Bishop Auckland with people with learning difficulties, followed by a huge party at the farm.

Mrs Atkinson told PA: “I think it’ll be absolutely spectacular and I think it will eclipse the other jubilees.

“I was around in the Silver Jubilee and it was like a year-long party. We had a great time.

“I think the highlight of the Diamond Jubilee year was the Queen apparently jumping out of a helicopter to open the Olympics.

“Well, what are we going to do this year? It’s going to be absolutely stunning.”

Wearing a Union flag jacket with matching earrings, the magistrate, retired newspaper editor and grandmother-of-five said the Queen could never have imagined in 1947, when she was 21 and vowed to serve her country, that she would still be reigning in 2022.

Mrs Atkinson acknowledged the tough times the Queen has faced over the 70 years, with the loss of loved ones, family divorces, scandal and tragedy.

But, she said, the public have not turned against her, due to her long service and dedication, even if they sometimes recognise trouble in the family.

Mrs Atkinson said: “Yes, there’s problems, with the children, with the grandchildren, but people go ‘Yeah, that’s what I’ve got as well, that’s life’.

Mrs Atkinson is in the process of having her collection of books, cups, plates, posters and other memorabilia officially recognised as the world’s largest (Owen Humphreys/PA)PA Wire/PA Images - Owen Humphreys

“But the ship of state sails on unaffected, and the Queen just carries on.”

Mrs Atkinson, who is in the process of having her collection of books, cups, plates, posters and other memorabilia officially recognised as the world’s largest, said she expects the “forgiving” Queen will want Harry and Meghan to be at the jubilee celebrations.

And the public have come to accept the Duchess of Cornwall as future queen after an unpopular start to her marriage to the Prince of Wales.

Mrs Atkinson agreed the Queen’s announcement that she would like that to happen was a gift to her oldest son, saying: “It was clever, because if there was one day, ever in her life, where she could announce something like that, it was going to be on the anniversary of her accession to the throne, where no-one could criticise.”