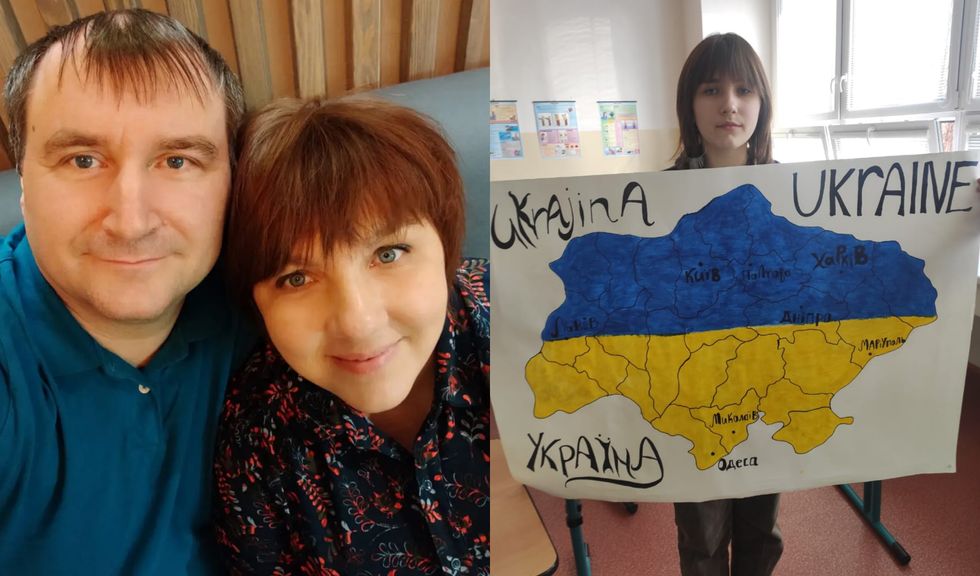 Luda Sviridok and her husband Sergey (right) and her nine-year-old daughter who painted a map of Ukraine for the classroom. (Luda Sviridok/PA)

A teacher who fled the war in Ukraine and now runs classes for child refugees said her pupils are “thankful for the normality”.

Luda Sviridok, 47, escaped the Ukrainian city of Kharkiv with her two daughters, aged 16 and nine, while her husband Sergey and 19-year-old son stayed.

On Monday, Mrs Sviridok began running her Ukrainian-speaking classes from a school in Ostrava in the north-east Czech Republic.

“The children seem happy to be able to talk in Ukrainian because for them it’s overwhelming to come to the country where they don’t understand the language,” she told the PA news agency.

“A lot of them are now enrolled in schools where they don’t speak Ukrainian, so they go to the classes but they don’t really participate.

“At the end of the first day, one child came up to us and said that it was really exciting for them to be able to speak in their own language again.

“When you are a refugee you come to a new place and you feel really overwhelmed, so they are thankful for these classes.”

Despite escaping their home country, the war in Ukraine is still a prominent feature of the children’s lives.

“We had an English class and I asked the students to write what they like and what they dislike. Almost all of them wrote that they didn’t like Putin,” Mrs Sviridok said.

In an image shared by Mrs Sviridok, one of her students, Polina, had written: “I like drawing and food. I don’t like Putin. I have (a) cat.”

In an image shared by Mrs Sviridok, one of her students, Polina, had written: “I like drawing and food. I don’t like Putin. I have (a) cat” (Luda Sviridok/PA)

Before the Russian invasion of Ukraine on February 24, Mrs Sviridok was teaching at an online school.

She now teaches around 20 refugee children aged six to 14 and is expecting more in the coming weeks.

“I understand that for parents who have come here, continuing to educate their children is too much for them because they already have too much on their plate,” she said.

“It makes me really happy to be able to help the kids and parents.

“Even my own daughter, who’s nine years old, is with me in this programme and she seems to be enjoying this very much.”

We had an English class and I asked the students to write what they like and what they dislike. Almost all of them wrote that they didn't like Putin

Mrs Sviridok said she gets daily updates from her husband and son about the situation in Ukraine.

“There is a lot of shelling and a lot of buildings have been destroyed – a lot of schools too, which is really terrible,” she said.

“It seems that the enemy is trying to destroy the future of our country because they know that if there are no schools the kids, like the parents, will not go back.

“It’s really aggravating and, you know, but I’m sure that the Ukrainian government will try to rebuild everything as soon as it is possible – when everything stops.”