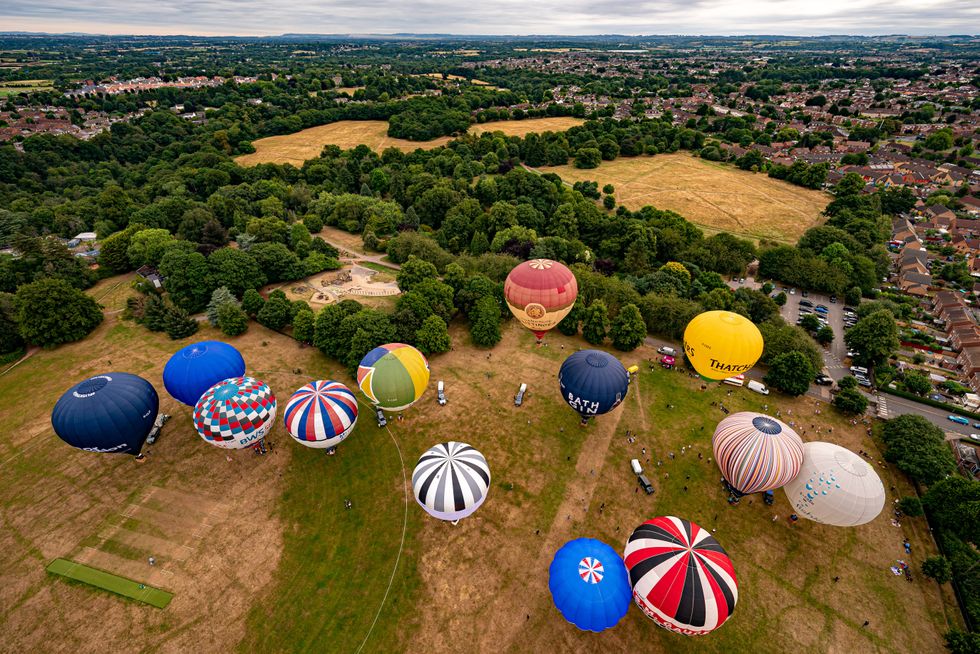 Bristol is gearing up to host its annual balloon festival later this month.

Thirty balloons were flown from Vassells Park in Fishponds and Cleve Rugby Club in Emerson’s Green on Monday, ahead of the main event from August 11 to 14.

More than 1,000 entries were made by Bristol residents to decide where the balloons should take flight from, with the green space at Vassells Park being one of the main reasons for its nomination.

Bristol International Balloon Fiesta has been going since 1979 and is the largest event of its kind in Europe.

The city is home to the world’s largest balloon manufacturer, Cameron Balloons, and has become a hub for the pastime.

Ian Martin, who was piloting a balloon sponsored by British designer brand Paul Smith, said four-man balloons can stay in the air for eight or nine hours if they have enough fuel.

But he also skippers bigger models that can carry up to 16 people at a time.

It was the maiden voyage of the Paul Smith balloon, kitted out in the brand’s signature stripes.

Mr Martin, who has been piloting balloons for 30 years, including a stint working for Sir Richard Branson, said that after the fiesta the Paul Smith balloon will head to Las Vegas to fly across the desert.

He also co-ordinates the Nightglow, which sees dozens of balloons fly across the Avon Gorge and fire their propane cylinders in time to music to create a floating light show.

Chris Allcock, chairman of the fiesta, said: “We are thrilled with this morning’s community launches, which were a huge success.

“It’s so important to us that everyone gets to experience the balloon fiesta, especially communities that rarely get balloons overhead.

“For these communities, it can be tricky to make it all the way to south Bristol for the fiesta, and to see the joy on their faces when the balloons take off is exactly why we do this. We are so thankful to Costa Coffee for partnering with us to make this happen.”

The event is so popular the Clifton Suspension Bridge has to be shut to the public while it is on to prevent too many people piling on and risking their safety.

This year the festival is back to full strength following the pandemic.

In 2020, the event was just a surprise “fly-past” of 43 balloons, and was kept secret to prevent people mixing.

Instead, Bristolians enjoyed the spectacle from their own communities.

Last year, on-the-ground activities at the Ashton Court estate were cancelled for a second year running because of social distancing measures.

Organisers co-ordinated a Fiesta Fortnight featuring hundreds of balloons taking off from different locations in Bristol for the first two weeks of August.

Please log in or register to upvote this article
Bristol