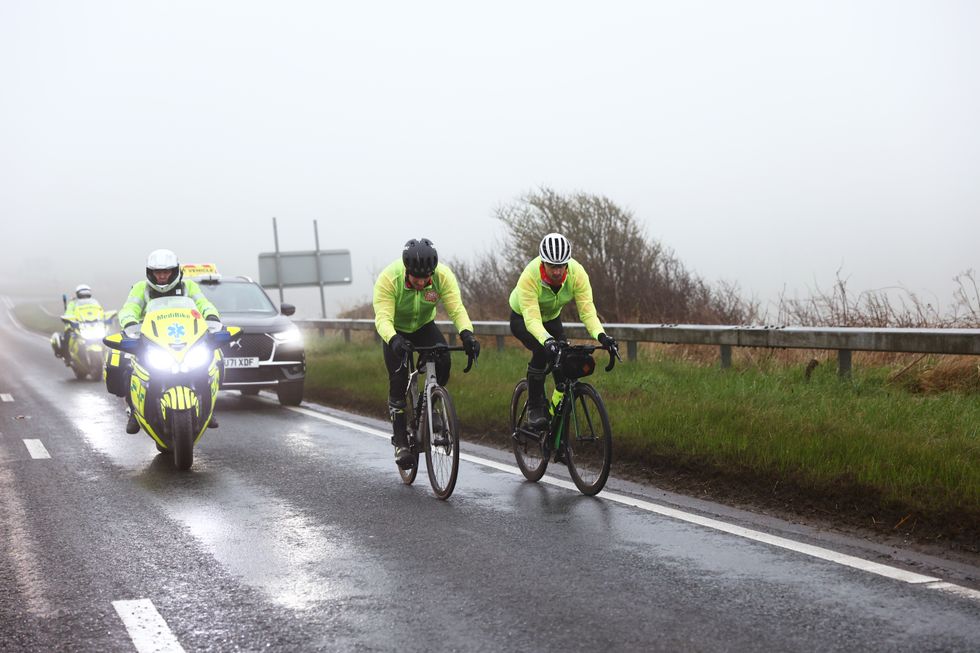 Tom Daley braved heavy rain and wind during a 130-mile cycle as he continued his gruelling four-day challenge to raise funds for Comic Relief.

The Olympic gold-medallist diver tackled the longest stage of his Hell Of A Homecoming Red Nose Day Challenge during day three.

On Wednesday, he cycled for more than 12 hours, climbing over 3,000ft, from Southampton to Bovey Castle in Dartmoor National Park.

Daley, 27, started his day at 6am at Quays Swimming and Diving Complex Southampton, an important location in his early career.

He was greeted by supporters cheering him on from the roadside, with some carrying banners and wearing masks of his face.

Ahead of setting off in the morning, he said: “I think today is the most tired and exhausted I’ve ever felt in my life.

“I’ve trained for four Olympics now and none of that comes close in comparison to how tired I feel. It’s just been relentless.

“I am so exhausted, and everything hurts. I now have the toughest day I’m ever going to have to deal with, sports wise, ahead of me.

“I’ve got at least 12 hours of cycling to get through, and yet the 63 miles I did yesterday absolutely zapped all of my energy. I have to do more than double that today.”

Daley, however, hailed the support he had received from the public.

He added: “The support has been absolutely amazing, with people coming out and waving, kids from schools with banners and all that kind of stuff.

“The people coming out to support me and thinking about how donations will help so many people, is what is getting me through the dark times.”

Daley set off on his homecoming tour on Monday, when he left the London Aquatics Centre in Stratford for a six-mile row to Tower Pier before a 60-mile cycle to the Redgrave Pinsent Rowing Lake in Reading.

On Tuesday, he completed a 1,600-metre open water swim before starting a 63-mile cycle to Southampton.

Tomorrow Daley will take on an ultramarathon of 30 miles, running towards his hometown of Plymouth.

His final destination is Smeaton’s Tower, where family, friends and supporters will be waiting to welcome him.

His journey is being documented for a BBC One and iPlayer special airing in March, ahead of the return of Comic Relief’s Red Nose Day on March 18.

Please log in or register to upvote this article
Tom Daley