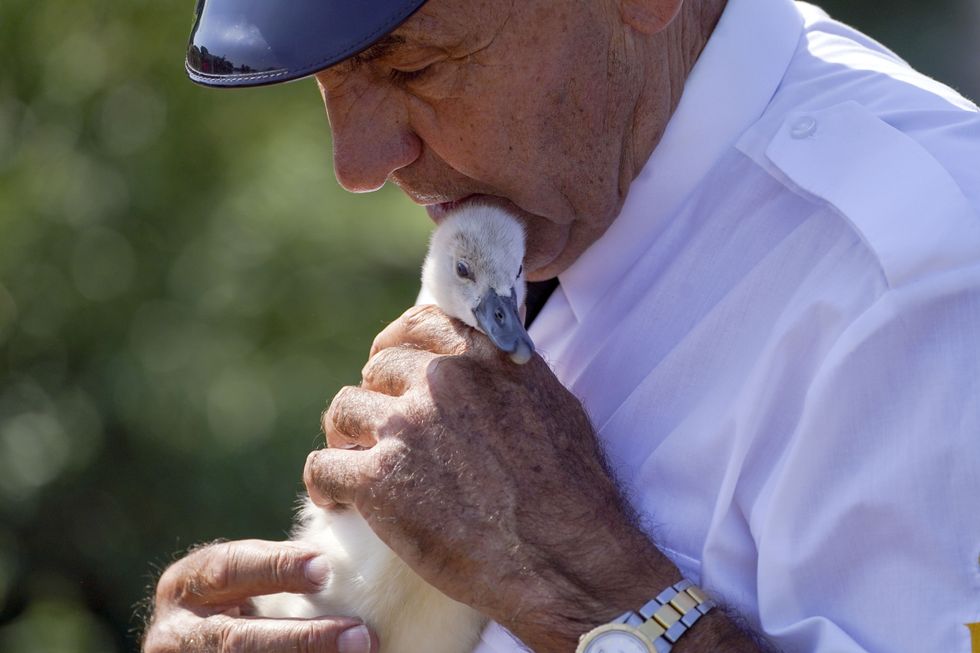 Adjustments were made to the ancient tradition of Swan Upping – the annual census of the swan population along the River Thames – to help the cygnets in the extreme heat.

The Queen’s Swan Marker, David Barber, accompanied by his team of Swan Uppers, took to the water in traditional rowing skiffs at Sunbury Lock Cut in Middlesex on Monday as the five-day count and check got underway despite the heatwave.

Usually, the baby swans would be removed from the water and taken ashore to be weighed, measured and examined for any problems.

But with temperatures hitting the high 30s, the cygnets were only checked in the boats for health issues and promptly returned to the river to keep cool.

The Queen retains the right to claim ownership of unmarked mute swans swimming in open waters, but this right is mainly exercised on certain stretches of the Thames, with the ceremony dating back to the 12th century.

Mr Barber told the PA news agency: “The cygnets do have an issue of going into fishing lines because they’re not streetwise or riverwise so you have to check those over.

“Normally, we would take them out of the water ashore and weigh each cygnet and measure each cygnet for our data.

“Today, we took them out of the water, checked them over, put a ring on them and then they went back in the water.”

Mr Barber, who has been the Queen’s Swan Marker for 29 years, said it was the hottest Swan Upping he has experienced, prompting him to dispense with his traditional uniform of a heavy scarlet blazer, decorated with embroidered gold thread detail and royal insignia.

He still wore his white short-sleeved shirt with top button done up, tie and peaked cap, and did briefly wear the jacket to honour the Queen.

“The only time I put my blazer on was in Romney Lock when we gave a toast to Her Majesty the Queen. I just had to do that,” he said.

“But it’s a very thick blazer, very heavy, and there was no way I could wear it today. That would be disastrous.”

Mr Barber said the number of cygnets appears to have fallen, but it is not a cause for concern, with numbers expected to drop due to the impact of avian flu.

One crew member held up an umbrella to protect himself from the soaring temperatures as one of the boats made its way along the river.

Others took a break from rowing and relaxed, lying down in the boats amid the sunshine.

Mr Barber said: “It was very, very hot as you can well imagine being out in open water with really not much shade, but everyone has been pretty good in drinking plenty of water, which has saved the day.”

The Swan Upping ceremony dates back to when the ownership of all unmarked mute swans in Britain was claimed by the Crown in order to ensure a ready supply for feasts.

It is the duty of the Queen’s Swan Marker to count the number of young cygnets each year on certain stretches of the Thames and its surrounding tributaries, and to ensure the swan population is maintained.

Its focus now is conservation and education.

Swan Upping 2022 began on Monday at Sunbury Lock Cut in Middlesex and will finish on Friday at Abingdon Bridge in Oxfordshire.

Next time someone says 'it's just the weather' show them this

Please log in or register to upvote this article
heatwaveRoyalSwansThe Queen