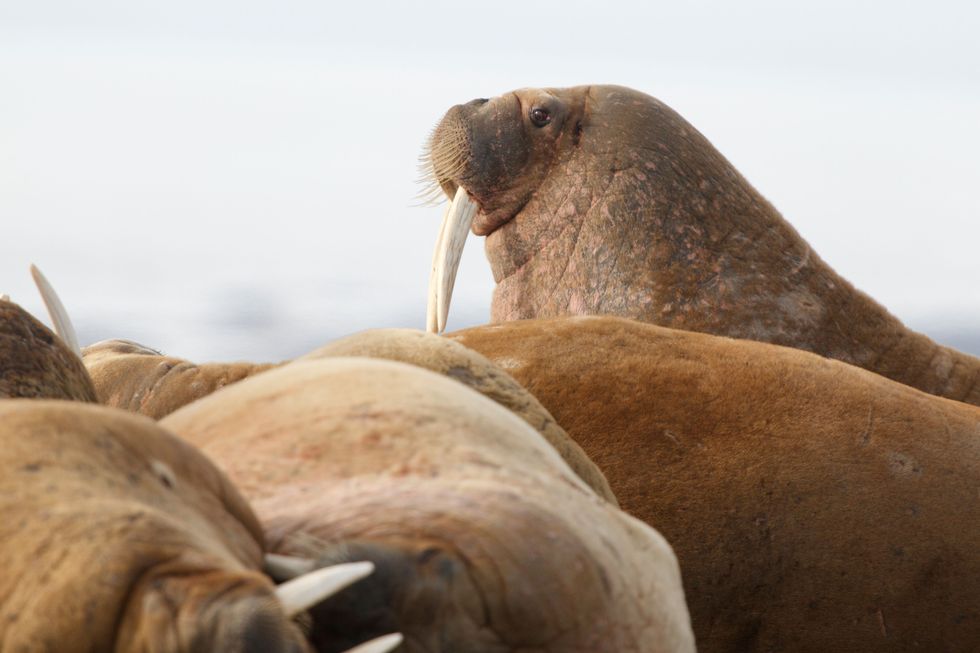 Scientists are heading to the Arctic to check the results of a citizen science survey counting walruses from space.

Researchers from the British Antarctic Survey, WWF-UK and the Norwegian Polar Institute will study walrus populations on Svalbard, Norway, to validate data gathered from counts of the marine mammal in satellite images.

It is part of the Walrus From Space research project which launched in October 2021 and asked members of the public to take part in a walrus census, detecting them in thousands of images gathered by satellites.

The team hopes to discover more about the impact of climate change on the animals, whose Artic home is warming about three times faster than the global average, with around 13% of summer sea ice disappearing per decade.

Satellites have captured high-resolution images of walruses congregating on more than 25,000 square kilometres of Arctic coastline – an area larger than Wales.

More than 11,000 members of the public have reviewed more than half a million images, detecting and counting walruses to give scientists crucial data on their populations.

Now the team will travel by boat to walrus haul-outs, areas where they come to rest on land, to count them visually and by using drones.

Their findings will be compared to the numbers counted from the satellite images.

A herd of walruses on an ice floe in Svalbard, Norway (Richard Barrett / WWF-UK/PA)

Hannah Cubaynes, from the British Antarctic Survey, said: “Assessing walrus populations across their whole distribution range by boats or plane is very difficult as they live in extremely remote areas.

“Satellite images can solve this problem as they can survey huge tracts of coastline to assess where walrus are and help us count the ones that we find.

“If the data we collect from fieldwork matches the data collected from satellite, then we’ll know this is a very effective way forward to benefit walrus conservation efforts.”

Rod Downie, chief polar adviser at WWF, said: “Walrus are an iconic species of great cultural significance to the people of the Arctic, but despite being big powerful animals, they are increasingly vulnerable to the effects of climate change which is melting their icy home.

“It’s easy to feel powerless in the face of the climate and nature emergency. This project enables individuals to take action to understand a species threatened by the climate crisis, and to help to safeguard their future. ”

Walruses use sea ice for resting and giving birth, but as the sea ice shrinks more are forced to haul-out on land, where beaches can become overcrowded with the risk of stampedes and trampling.

Resting on land may also force them to swim further in search of food, while they can also be disturbed by increased shipping and development as the melting Arctic opens up, experts said.

Researchers warn that the animals are facing the full reality of the climate crisis while current population trends are not well understood – something the project hopes to address.

Please log in or register to upvote this article
ArcticWalrus