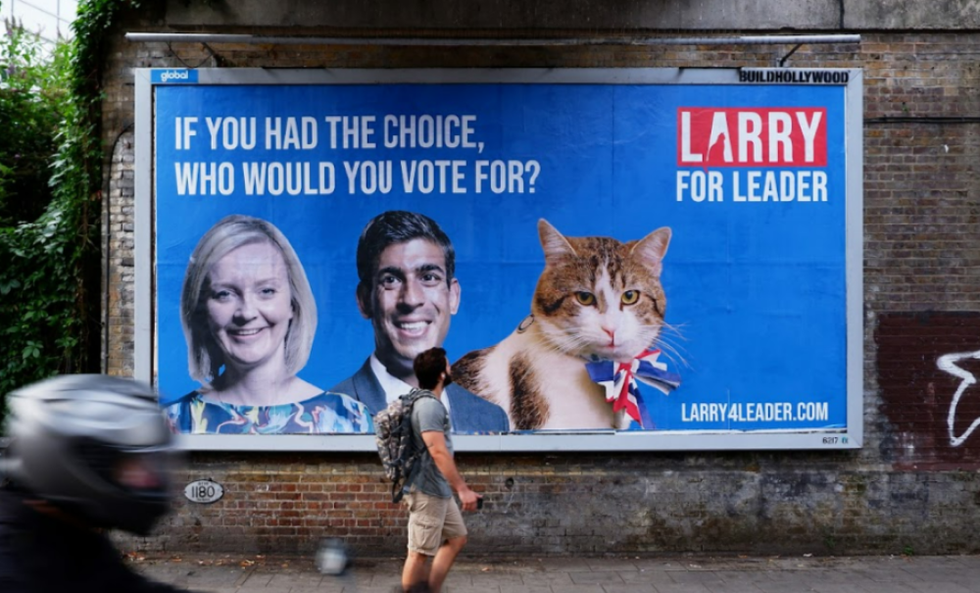 Twitter users were delighted to see billboards across London announcing that Larry the cat, No 10’s “chief mouser”, has thrown his collar into the ring to become the country’s next prime minister.

Either Liz Truss or Rishi Sunak will be declared as the new leader of the Conservative Party on Monday, but the campaign team behind #Larry4Leader has gone to extra lengths to ensure the tabby’s stance is known.

Larry was only four years old when he was adopted from Battersea Dogs and Cats home to begin his new life in politics and has served as a trusted companion to three prime ministers: David Cameron, Theresa May and the outgoing PM, Boris Johnson.

A tweet from Larry’s Twitter account with a picture of the billboard, featuring the cat in a Union flag tie below his slogan, quickly accrued more than 14,000 likes on Saturday.

“Dream come true,” it was captioned, along with the hashtags #Larry4Leader and #YesWeCat.

Users were quick to spot the billboards that have popped up in Hackney, Peckham and on Shepherd’s Bush roundabout.

“(Obviously) would vote Larry for leader (out of) the three,” 32-year-old Rebecca Rose shared along with a photo of Larry next to candidates Mr Sunak and Ms Truss.

Now been handed this en route to work and I’ve got no choice but to Stan. Hackney central is really working overtim… https://t.co/AQ0L3ERCqD
— rebecca rose (@rebecca rose) 1662016461

Writing above their faces reads: “If you had the chance, who would you vote for?”

Ms Rose later tweeted about being handed a #Larry4Leader leaflet and wrote: “Now been handed this en route to work and I’ve got no choice but to Stan… Hackney central is really working overtime in support of Larry the cat here.”

Many also posted pictures of their own cats in response to Larry as a show of support.

“We need clarity on all of your ‘paw’licies…” another wrote.

The team in charge of the campaign, Don’t Panic, partnered with Build Hollywood to organise the billboards.

They specified what Larry stands for, including “responsible hiss-cal policy” and “no lying in No. 10 unless it’s on a comfy cushion.”

Woman films 'nightmarish' toes that invaded her space on a flight