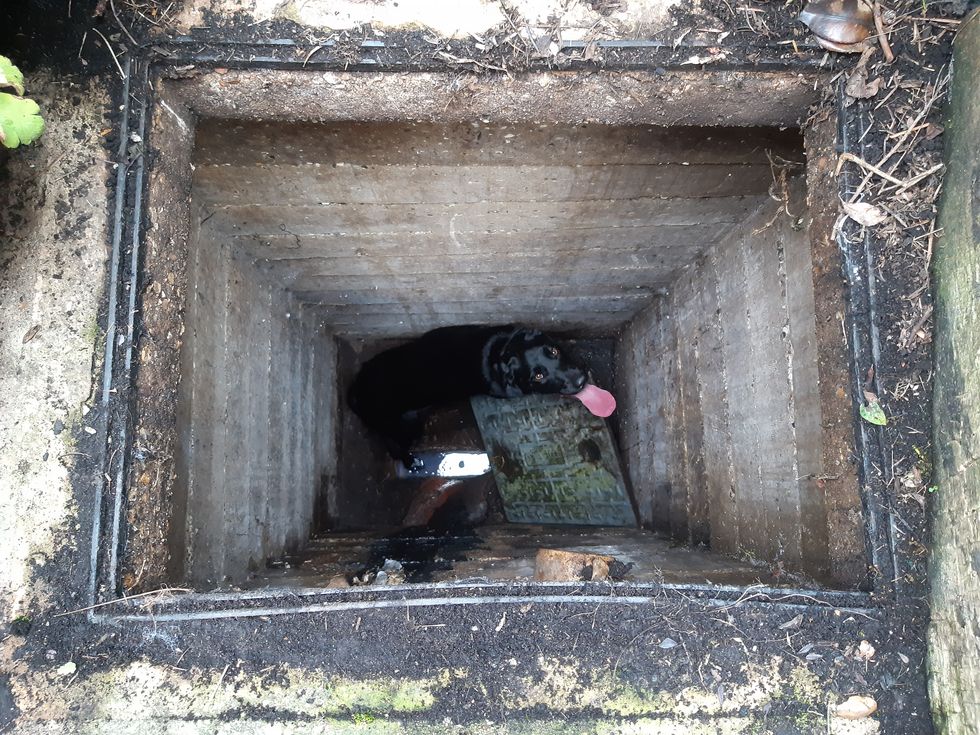 A black Labrador was “completely unfazed” after being rescued from a three-metre-deep sewer.

Ollie had accidentally broken through a faulty sewer cover while playing in the back garden of his owners’ home in Holbury, Hampshire, and a rescue mission ensued.

The “first priority” for Hampshire Fire and Rescue’s animal rescue team and expert Jim Green was to ask neighbours to stop flushing their toilets while Ollie was stuck.

Ollie was ‘uninjured’ after his ordeal in the sewer (RSPCA)

“To protect Ollie and to facilitate his rescue, the first priority was to stop any neighbours from flushing their loos,” RSPCA inspector Graham Hammond said.

“A multi-handled ground sheet was put under his belly to lift him, and throughout he remained friendly and easy to handle. This resulted in a straightforward and easy rescue, though a bit smelly.

“Once Ollie was brought to the surface I gave him a check over, and luckily he was uninjured, though very unsavoury.

“He seemed completely unfazed by his ordeal.”

Mr Hammond said that while staff had to be hosed down afterwards, it was “a happy ending” for Ollie, although the pup may have been “pooped out” later on.

Staff had to be hosed down after the rescue (Jim Green)

“I’d like to thank Hampshire Fire and Rescue for their help and expertise,” he added.

“Jim Green ‘wrote the book’ on animal rescues and Ollie was in very safe hands.”

Please log in or register to upvote this article
AnimalsRSPCAUplifting

Sarah Michelle Gellar once lived out our Jennifer Coolidge dreams