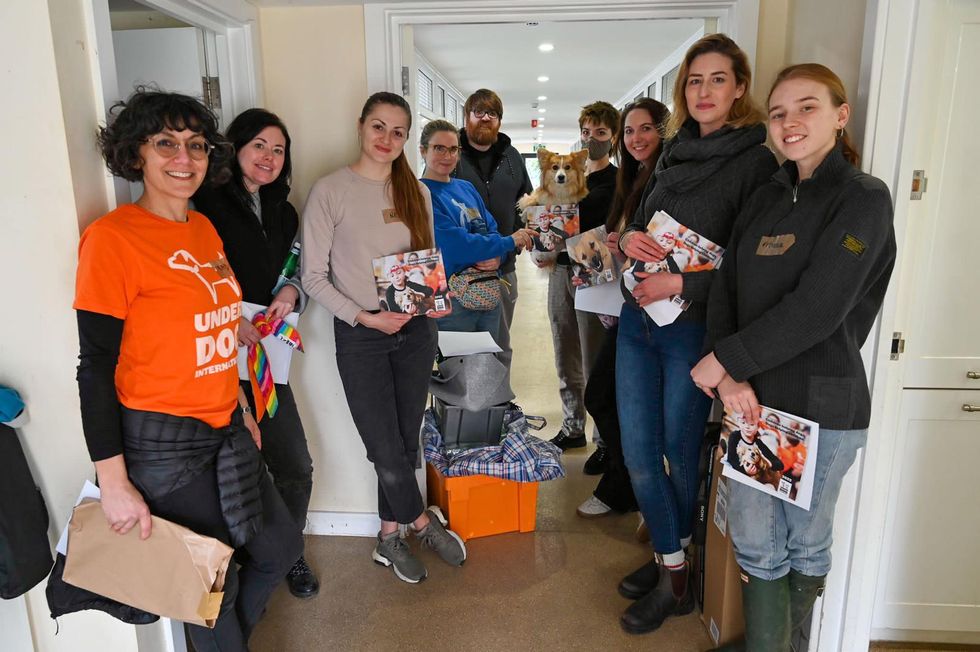 An animal welfare charity has thanked the British public after raising £35,000 to support Ukrainian refugees’ pets arriving in Romania.

Dogs, cats and even snakes have featured in images and reports from war-torn Ukraine, with many people fleeing the conflict by heading to Poland or Romania – where they can stay with their pets.

Underdog International launched a fundraiser on February 26 – two days after Russia invades its neighbour – to support non-governmental organisations (NGOs) in Romania working with Ukrainian refugees and their pets.

It created an online wishlist which included “pet food, medical kits for animals and for humans and baby nappies” and was inundated with packages within hours.

“We had to freeze the Amazon wishlist because we literally received 2,000 parcels within 48 hours,” chief executive Nadine Kayser told the PA news agency.

Elmtree Pet Hotel in north London allowed Underdog International to use its daycare building to sort the parcels.

Two vans filled with supplies have already been driven to borders in Romania and the charity plans to send two vans per week for the foreseeable future.

The first arrived at the Iasi border last Friday to help Way of Freedom, a dog NGO, and the second arrived on Wednesday to assist Saved by the Vet Romania, which rescues, rehabilitates and rehouses abandoned dogs and cats.

Underdog International has also raised £35,000 to send to its Romanian partners – including a Romanian shelter, Save our Paws – and to buy supplies.

The founder of Save our Paws, and a vet, Emma, has been going into refugee camps to hand out leaflets written in English and Ukrainian, which say: “Don’t give up your pet, we’re here to help.”

Pet food to be sent to Romania (Underdog International/PA)

“It’s got phone numbers on it so they can call if their pet is sick, which is quite common as the pets have had to be dragged or carried for hundreds of miles,” Ms Kayser added.

As the refugee camps are busy, it is not ideal for dogs and cats to be “running about everywhere”, so Underdog International sent Emma £3,000 to buy some crates to minimise the risk of animals being separated from their owners.

“There are thousands and thousands of people streaming through” as people use the border to travel to other parts of Europe, Ms Kayser said.

Dog being issued with a pet passport (Underdog International/PA)

“Quite often, what we’re seeing is people, at that point, realise that they can’t take their pets with them on the plane.

“She microchips; she does all the legal and medical things required to get the animal a European pet passport, which means that they can actually travel,” she added.

Pet passport being issued for a cat (Underdog International/PA)

The 47-year-old from north London, who has three rescue dogs, said: “I think anyone who has had an animal knows that they are a part of your family. It is so hard to just leave them.”

The wishlist has since been reopened, with a particular need for medical equipment and baby care items. Underdog International is also accepting donations on its website.

Woman becomes attracted to fence and has physical relationship with it