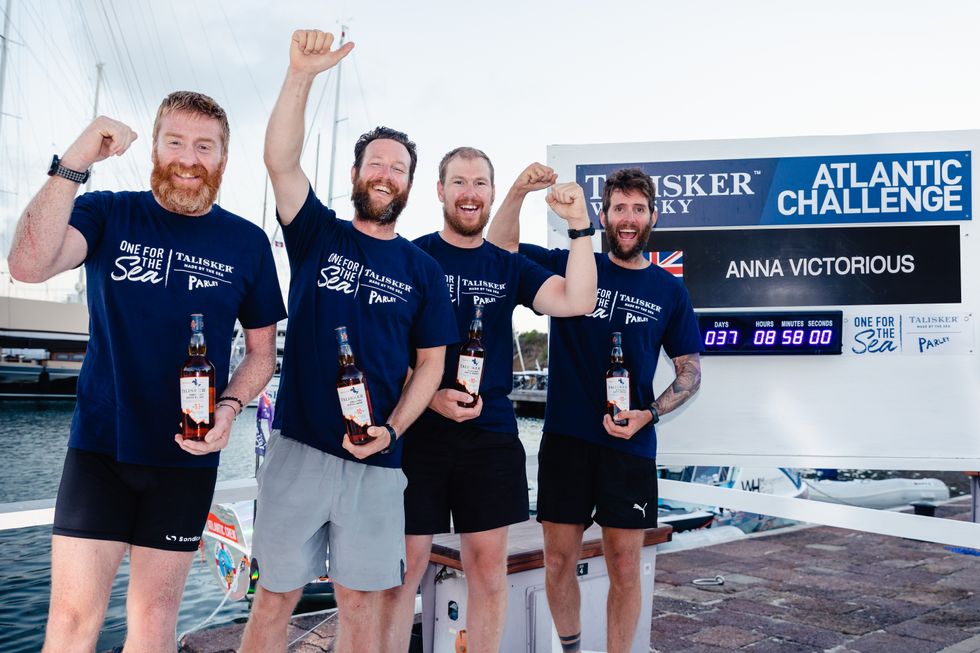 The crew, consisting of Ed Smith, Rob Murray, Adam Green and Jack Biss, set off on December 12 from La Gomera in the Canary Islands as part of the Talisker Whisky Atlantic Challenge.

They spent Christmas and New Year on board before arriving in Antigua 37 days, eight hours and 58 minutes later.

Mr Murray, 40, said: “Being away from modern life felt wonderful – to be away from our hectic lives and reconnect with nature – then, after about a week, the pain of missing family and loved ones really hit.

“That’s what motivated us to get to Antigua and get back to our families.”

The 3,000-mile journey was made in part to support One For The Sea, a partnership between Talisker and environmental organisation Parley, which aims to preserve 100 million square metres of marine ecosystems.

Mr Smith, who has spent the last nine years as a firearms officer for the Thames Valley and Metropolitan police forces, said: “For the past 37 days, we have been alone – just the four of us and the ocean – and it really makes you realise just the importance of the ocean for human life.

“Without the ocean, there is no life. It is vitally important that we protect it for everyone, and in particular, for our future generations.”

The team was named Anna Victorious in honour of Mr Smith’s wife Anna, who died from cancer at the age of 38 in 2018, and the charity that supported her, Victoria’s Promise.

By Thursday, the team had raised more than £36,000 for the charity.

The crew rowed two hours on, two hours off, and Mr Murray said they “focused on the positive things in each day, savouring the experience”.

He added: “We saw whales, dolphins, tuna, marlin – one of the flying fish even hit one of the team in the face.

“On a clear night we would look up at the stars and know that they were the same stars that our family were seeing back home, and that was really special.”

To donate to Victoria’s Promise, head to justgiving.com/fundraising/annavictorious

To donate to One For The Sea, head to oneforthesea.com/Donate

Please log in or register to upvote this article
Atlanticcharity