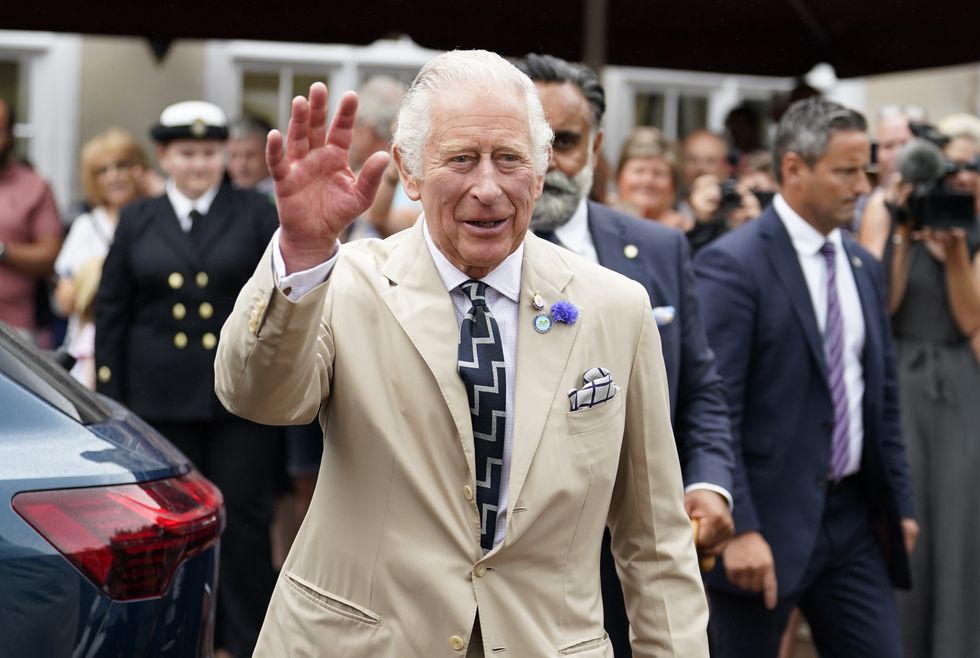 The Prince of Wales celebrated the 200th anniversary of HM Coastguard and joked that some of their kit resembles something out of James Bond.

During a visit to Torquay, Devon, with the Duchess of Cornwall, Charles toured an open-air display of equipment, vehicles, an all-weather helicopter and even drones used to rescue everyone from sunbathers to sailors around the nation’s coastline.

When he attended Gordonstoun School in Moray, northern Scotland, Charles was a Coastguard auxiliary member and has spoken in the past about how the schoolboys would man a lookout on the cliffs.

Martin Croad, a volunteer coastguard member, showed Charles some of the equipment, including a drysuit used in flood rescues which keeps the wearer dry – similar to the outfit used in a scene from Goldfinger when 007 unzips a diving suit to reveal a pristine ivory dinner jacket.

The volunteer, based in the village of Beer near Exeter, said afterwards: “The prince said ‘do you rip it off and you’ve got a tuxedo underneath like James Bond?’

“It’s not quite like that but it does keep you dry.”

HM Coastguard was founded on January 15 1822 to prevent smuggling rather than the loss of life at sea, and today has 3,500 volunteers in 310 teams supported by 10 search and rescue helicopters.

As Charles toured the equipment displays manned by teams, he was taken by the number of volunteers who are electricians, when he quizzed them about their day jobs, and one quipped: “We can give you a good quote.”

Helen McCaffery, the UK’s deputy chief Coastguard, said: “There’s a diversity of backgrounds within our volunteers, they could be a nuclear scientist, they could be a mum-of-two who’s a homemaker, and everyone in between – each and every one of them brings something to the role.

“We couldn’t do our jobs without volunteers, to have their royal highnesses come and acknowledge their input and efforts has been a wonderful day and especially during our important 200-year anniversary.

“His royal highness was also a volunteer coastguard while at school, they were called auxiliaries in those days and have developed into the volunteers of today. He’s very passionate about the volunteer ethos and how we work.”

Charles is Honorary Commodore of the Maritime and Coastguard Agency and met the volunteers in the grounds of Torre Abbey close to the Torquay seafront.

Later on Wednesday, Charles and Camilla visited Cockington Court, near Torquay, a stately home that has become a creative hub for the local community.

The couple were serenaded by a Samba Roc, a band set up by the charity United Response which supports adults with learning difficulties and mental health problems.

Band leader Deb Perry told PA that Camilla had been very taken with the music.

“She said she really enjoyed it and asked us how long we had been playing, it will be 20 years next year and she said today was ‘a precursor to next year’s celebration’,” Ms Perry said.

Also among the guests were people who have participated in the Prince’s Trust “Get Into” scheme, which helps people find work or set up businesses in different industries.

Sophie McIlwaine, 28, was supported in founding her architectural drawing business when she joined the “Get into enterprise” scheme.

She said: “The prince was very well prepared and knew what we were all doing – we talked about traditional drawing and how architectural drawing is becoming a lot more computerised.

“Architecture and preserving old buildings is a subject he is very interested in and we talked about how you need computers but we also need to know how to draw in pencil.”

The also visited the estate’s collection of artisan craft shops, including a traditional glass blowing workshop and a blacksmith.

In a lighting and decor workshop, he met with Nic and Andy Bouchard, who make everything from reclaimed wood that would otherwise be burned or go to landfill.

Mrs Bouchard said: “When we told him we used reclaimed wood that made him smile – he said ‘keep it up’.”

TikTok hack shows if your boyfriend has nudes on his phone

Splinter Cell is making a comeback - as a BBC radio drama