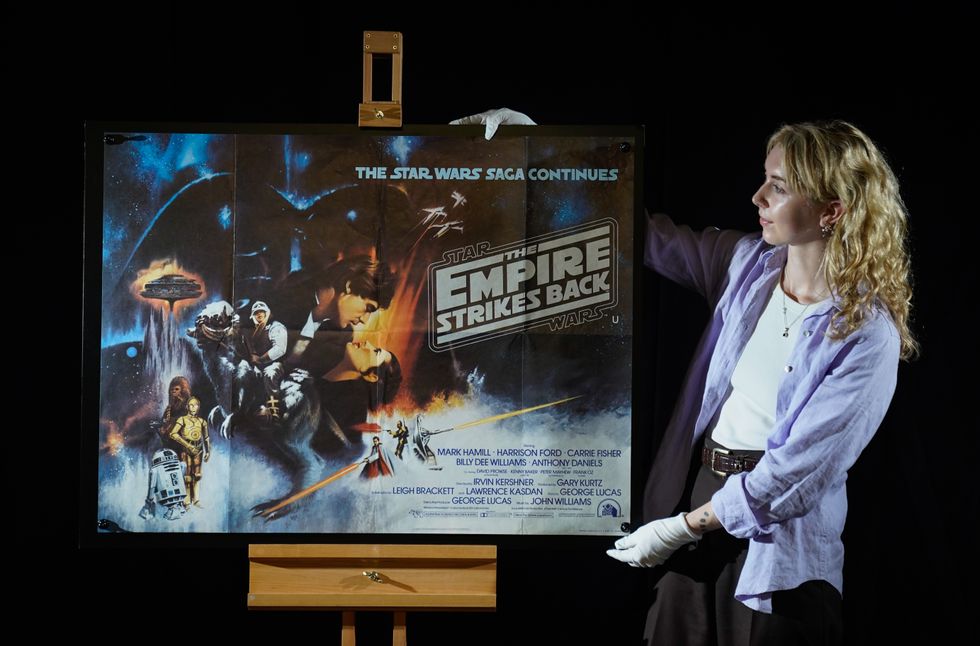 A selection of film and music posters with an estimated value of more than £350,000 is set to go up for auction next month.

More than 530 posters from films including 1980 release Star Wars: The Empire Strikes Back and Goldfinger, the third instalment in the James Bond franchise, will be available to bid for.

The auction, which will be held by film and TV entertainment memorabilia company Propstore, will take place on September 15 and will also include posters from a number of classic horror films.

Propstore chief executive Stephen Lane said: “Propstore is back with another fantastic collection of posters ready to go under the hammer.

“Just a few of the auction highlights include an incredible array of Star Wars posters, as well as rare lots from sci-fi and horror classics.

“The auction will be back again live from our UK headquarters on Thursday 15 September 2022, and we expect to see some awesome results.”

Content from the official archive of British illustrator and cinema poster artist Tom Chantrell, who was responsible for posters for the Carry On film series and the UK release of Star Wars, will also be up for sale.

A poster from the first full-length adaptation of DC Comics character Batman, released in 1966, will also be available.

A variety of music posters will also be up for auction, with original concert and promotional material from artists including The Beatles, Elvis Presley and the Sex Pistols.

Propstore’s director of posters Mark Hochman said: “Recognising the needs of fans and buyers, our Star Wars, horror, sci-fi and James Bond categories are chock-full of amazing content such as original country of origin one-sheets for Forbidden Planet and Frankenstein Meets The Wolf Man and a full-size, untrimmed British Gone With The Wind-style quad for The Empire Strikes Back.

“We are also pleased to be able to offer unique pieces from the personal archives of the artists Tom Chantrell and Paul Shipper.

“For the first time, we are delighted to include a dedicated music category which features an array of original concert, promotional and movie-themed titles from The Beatles, Sex Pistols, Elvis Presley and many more.”

Online bidding is now open until the live auction, which will take place at 3pm on September 15 and will be streamed online.

Please log in or register to upvote this article
Batman