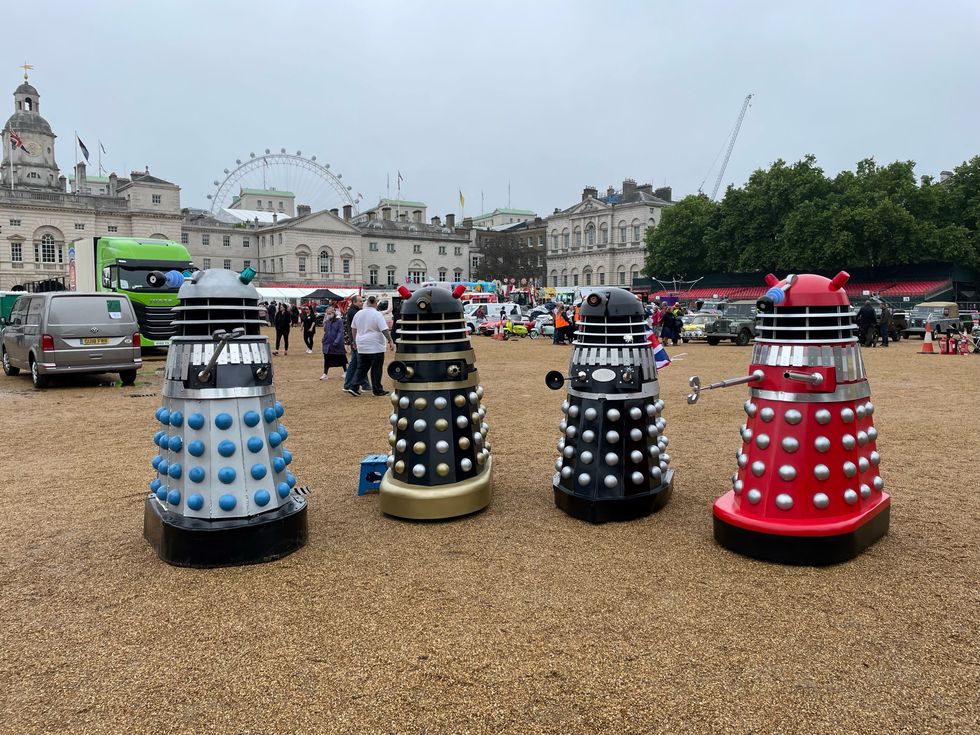 A gang of Daleks, extra-terrestrial mutants known from the Doctor Who television series, prepare to take part in the section of the Jubilee parade celebrating the 1960s at the Platinum Jubilee Pageant (Sophie Wingate/PA)
PA Wire/PA Images - Sophie Wingate

A cast of thousands of colourful characters and hundreds of iconic vehicles parading through central London for the Jubilee pageant include 1950s motorcycles, decorated double-decker buses from seven decades and a band of belligerent Daleks.

The four extra-terrestrial mutants from the sci-fi television programme Doctor Who will be rolling alongside cultural icons from the 1960s in the decade-by-decade Time of Our Lives section of the spectacle.

True to their combative on-screen nature, the Daleks threatened other performers and journalists gathered on Horse Guards Parade with “extermination”.

They have to have someone with them so that they don’t run over anything, bump into anything or go over potholes

“Surrender now, you have been exterminated! Do not threaten the Daleks!” one of the villains shouted as it charged towards squealing onlookers.

One of the operators, Simon James, 48, said he did not mind spending many hours in the suit.

“I have a nice comfy seat, so I’m going to get the best seat in the house,” he told the PA news agency.

In his mechanical Dalek voice, the train driver from Birmingham added: “I am very excited to be taking part in the Platinum Jubilee.

Sarah Jones, 74, from Islington, is driving her vintage car as part of a fleet of 1960s vehicles in the Platinum Jubilee Pageant in London (Sophie Wingate/PA)PA Wire/PA Images - Sophie Wingate

“The Queen has done this country an amazing service and we are here to pay respect to the sovereign”.

Gaynor Cowley, 58, said she was accompanying the Daleks as a minder.

“They have to have someone with them so that they don’t run over anything, bump into anything or go over potholes.

“I help him get in and out of the Dalek too,” she said, adding that they were members of Project Dalek, who build Daleks and give advice about them.

The gravelly parade ground on St James’s Park was filled with vintage cars and motorcycles, floats and performers preparing to set off on the 3km carnival procession on a grey and cool Sunday morning.

The 1960s part of the parade will also feature a fleet of iconic Minis, with the driver of one saying she was “emotional” to be participating.

Sarah Jones will be driving her model, which she bought for £500 in 1974, with a cut-out corgi peeking out the back.

The 74-year-old silversmith from London’s Islington said she crafted a bunch of silver national flowers for the Queen’s Silver Jubilee, featuring the daffodil, rose, shamrock and thistle.

Open-top buses were lined up on Horse Guards ready to carry celebrities from each era of the Queen’s reign.

Bus preservation enthusiasts Richard Dixon, 63, and Ivan Fisher, 42, who will be a ticket conductor on the 1950s bus and the driver the 2000s bus, respectively, said they were more excited about taking part in the event itself than meeting celebrities.

Mr Fisher said: “I’m more keen to be involved in the pageant and do it for the Queen really, because I’m a great royalist, so anything royal I’m keen on. It’d be nice to have any of them (celebrities) on.”

Barry Yarde, one of the motorcyclists who will lead a fleet of classic bikes in the 1950s section on his 1953 twin-engine Sunbeam S7 said it was “brilliant” to be part of the festivities.

The 66-year-old from Brockley in south-east London, said: “Whether you’re a royalist or not it makes no difference, just the celebration of 70 years I think is a brilliant thing to be part of.

“After two years of an absolute tough time for everybody, a gathering like this is just wonderful, watching everyone enjoying being out and being together, that’s important”.

The ambitious £15 million pageant is split into four acts: For Queen and Country with a military parade; The Time of Our Lives progressing through seven decades of culture, music and fashion; Let’s Celebrate telling the story of the Queen’s life in 12 chapters with corgi puppets and carnival creations; and the Happy and Glorious musical spectacle.

Please log in or register to upvote this article
JubileeRoyalThe Queen