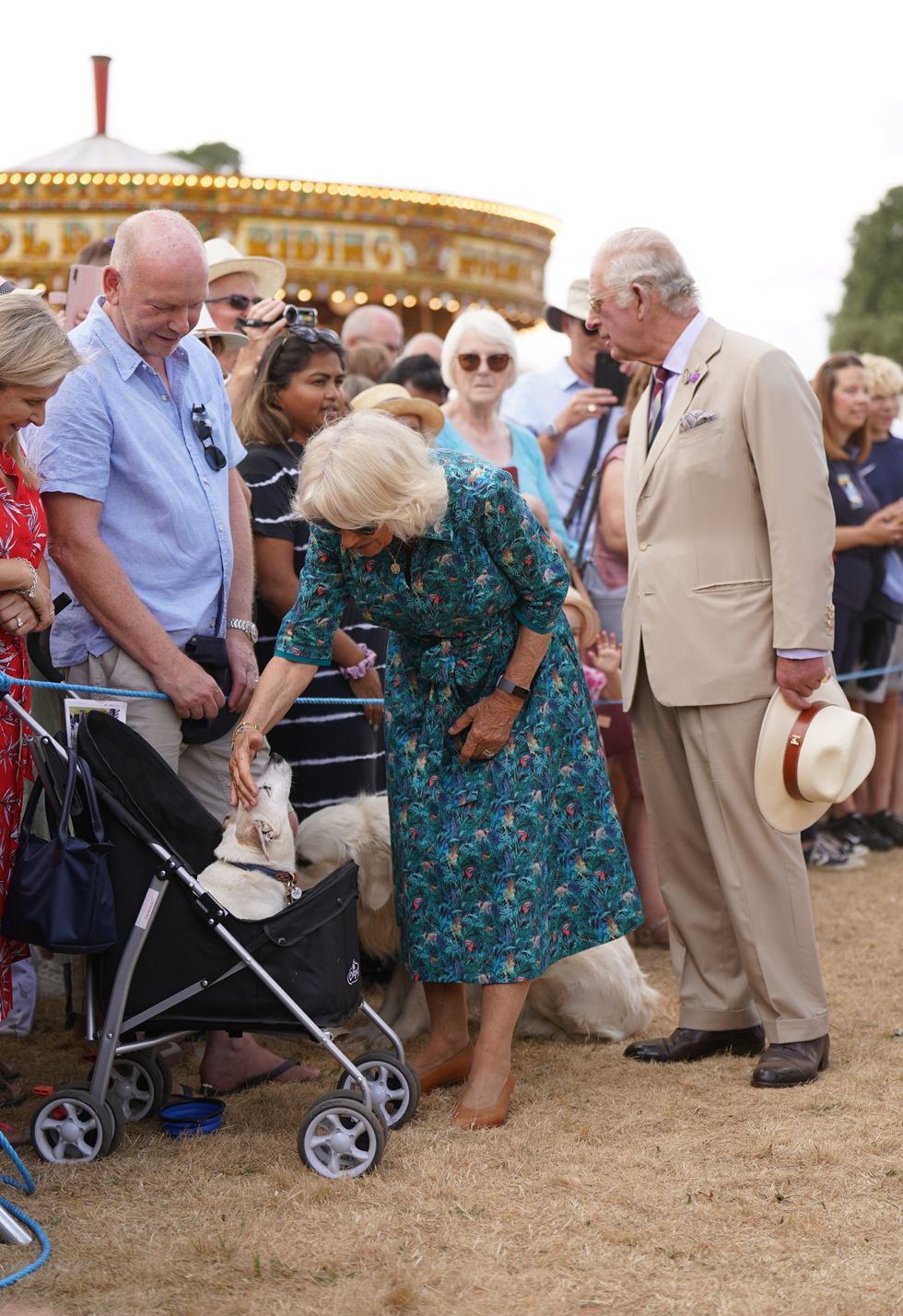 The Duchess of Cornwall stokes Dill, a Jack Russell terrier, as she meets members of the public with the Prince of Wales during their visit and tour of the Sandringham Flower Show (Joe Giddens/ PA)
PA Wire/PA Images - Joe Giddens

The Duchess of Cornwall petted a dog in a buggy during a walkabout at the Sandringham Flower Show alongside the Prince of Wales.

Camilla, 75, stroked white Jack Russell terrier Dill on the head as his owners showed her a picture of her meeting their 15-year-old pet 11 years ago, at the 2011 event.

Steven Southern, 59, of Bawtry in South Yorkshire, said afterwards: “They met in 2011 and Dill actually rolled over for Camilla to tickle his tummy and she remembered.

“How they remember I’ve no idea.

“I mentioned it to her that we had met before.”

Mr Southern, who was with his wife Rachel, 57, said that in 2011 the duchess had been wearing a diamond dragonfly brooch, which fell off.

He said on that occasion he had bumped heads with Charles, 73, as they both tried to pick up the brooch and had laughed about it.

Wednesday’s show was the first since 2019 after it went on hiatus due to the Covid-19 pandemic, and this year was the 139th staging of the event.

While being shown flowers in a display tent, Charles told one exhibitor: “I used to come with my grandmother every year.

“She would be so pleased it keeps going.”

He asked crowds outside: “Are you all enthusiastic gardeners?”

During a stop at the Sandringham Women’s Institute (WI) tent, Camilla bought three knitted toys, a bear, a dog and a tortoise costing £2 each, paying with a £20 note.

WI member Sandra Smith, 77, said Camilla did not mention her grandchildren but she was “very impressed” with the toys.

“It was lovely, she was very easy to talk to,” she said.

“They really enjoyed looking round,” she said.

“They were in very good spirits.”

Charles and Camilla also spoke to well-wisher Lewis Kirkby, who wore a waistcoat with pictures of the Queen on it and had Union flags on his head.

The duchess told the 28-year-old, of Hedon in East Yorkshire: “You’re covered in the Queen.”

“Are you going to wear it all day?”

The pair arrived at the show in a carriage drawn by two white horses and were greeted by a round of applause as God Save The Queen was played by a brass band.

After touring displays of flowers, vegetables and assorted crafts, they inspected the Guard of Honour of the King’s Lynn Air Cadets, and then departed in their horse-drawn carriage.

Sandringham Flower Show takes place at the Queen’s Sandringham Estate in Norfolk, with the one-day show attracting around 20,000 visitors each year.

The profits from each show are donated to local charities and since 1977 the show committee has given around £780,000 to good causes.

Please log in or register to upvote this article
NorfolkRoyal