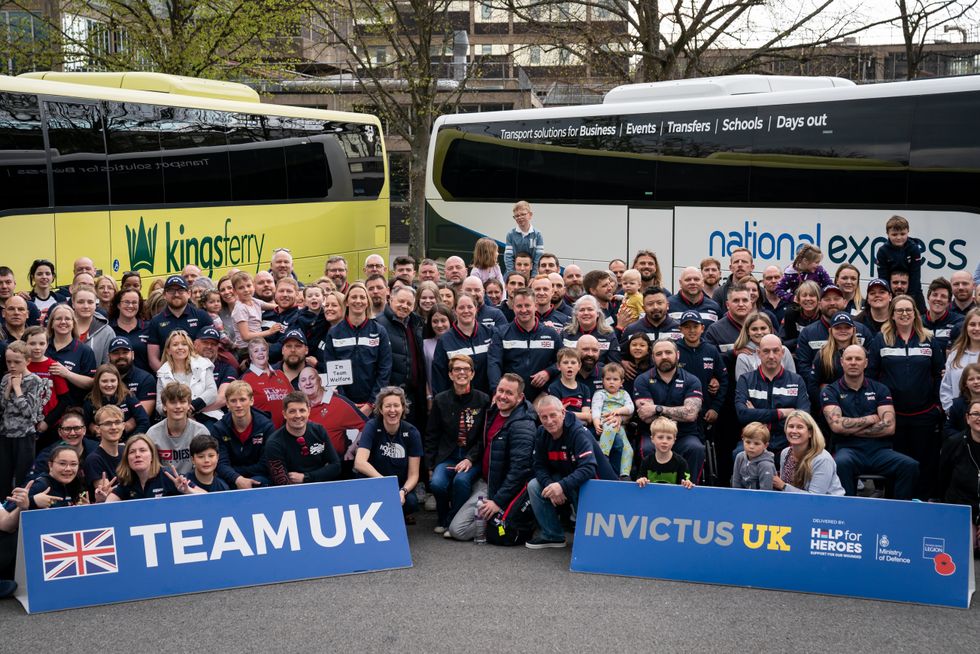 The Invictus Games Team UK captain has said there could be an emotional week ahead as the group travel to The Hague to take part in the competition.

The team will be joined in the Netherlands by the Duke and Duchess of Sussex for the event, which is taking place from April 16-22 after being delayed by the pandemic.

Harry founded the Invictus Games to aid the rehabilitation of injured or sick military personnel and veterans from across the globe, by giving them the challenge of competing in sporting events similar to the Paralympics.

She told the PA news agency: “It’s done exactly that for me. And I think probably part of my responsibilities is just to make sure people have that awareness of what could happen or will happen during the games.

“Because it can go by so quickly, and it can be quite an emotional week for everybody for different reasons.”

Ms Williamson added: “I just can’t wait to see the rest of the team have that first games experience and just see their faces, of how proud they’re going to feel of themselves for just doing this.”

Ms Williamson served as a medic in the RAF for 10-and-a-half years and represented the RAF rugby union women’s team.

During a training session, she injured her right hand and did not think much of it at the time.

As the weeks and months passed, she realised she was losing the function in her hand which then went up her arm.

“Now I’ve got very little function of my whole right arm and I’ve had to learn to be not only just left-handed, but one-armed, and adapt my entire life to this new way of living,” she said.

Ms Williamson, about to go into her second Invictus Games, said it has “changed my life around”.

She said it has also brought her closer to her family, adding: “Post injury I just ignored everybody, and just thought I’m going to deal with it myself and hide as best I can.

“But I now have this new relationship with my parents. I probably speak to them far too often nowadays because of it.

“But no, I’m just happier in life again, and I can just enjoy my job, enjoy my family, and because of doing the Invictus Games that’s why I’m how I am today.”

The 59-strong team – 90% of whom will make their Invictus Games debuts – gathered at Brunel University in Uxbridge on Wednesday evening for a team photo ahead of setting off on six coaches with family and friends on Thursday morning.

Charity Help for Heroes is responsible for the selection, training and welfare of UK competitors.

A couple of weekends ago, Team UK’s friends and family cheered them on from the sidelines at a training camp, supported by the Royal British Legion.

Meghan’s attendance at the Invictus Games, for the first few days, was confirmed by a spokesperson for the couple on Monday.

It will be her first trip to Europe since the couple quit as senior working royals more than two years ago.

The trip to the Netherlands comes after Harry was absent from the Duke of Edinburgh’s memorial service in London last month.

Harry is bringing a claim against the Home Office after being told he would no longer be given the same degree of personal protective security when visiting from the US, despite offering to pay for it himself.

The duke wants to bring his children to visit, but he and his family are “unable to return to his home” because it is too dangerous, his legal representative has said.

A spokesperson for Harry confirmed earlier in March that he would miss the service for his grandfather, but that he hoped to visit the Queen soon.

Dai Davies, a former head of royal protection at Scotland Yard, said the idea that Harry is unable to come to the UK due to safety concerns is “sheer unadulterated nonsense”, adding that the duke is “not an expert in security”.

It is not known whether Harry will visit the UK and see his grandmother while he is on this side of the Atlantic for the Invictus Games.

Mr Davies suggested the safety of Harry will be secured by his own team or he may be given “VIP status” by Dutch authorities during his trip to The Hague.