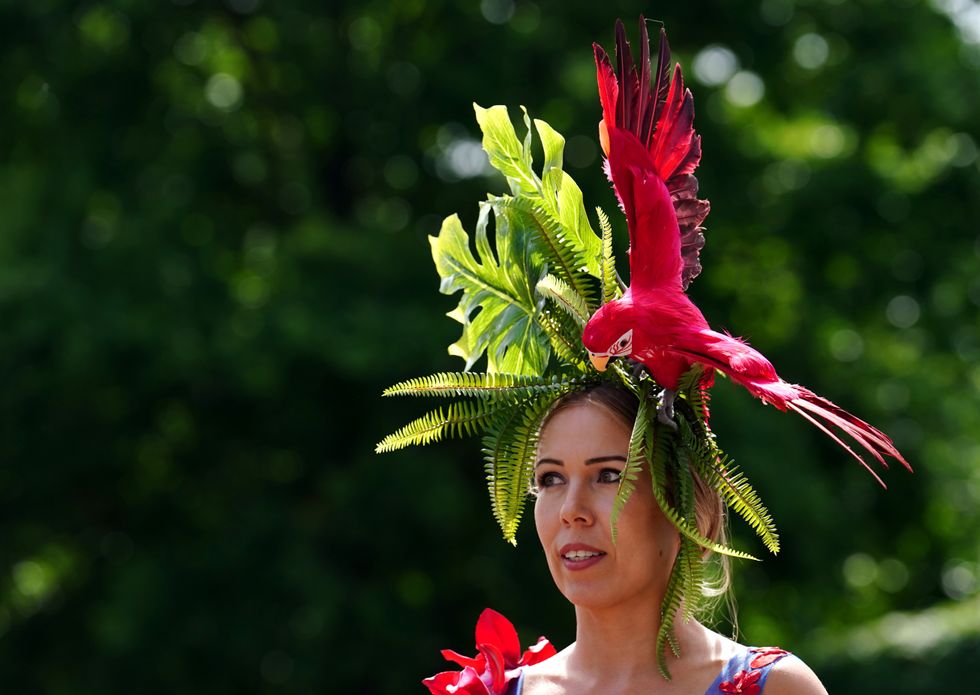 Colourful, creative and wacky hat designs were on display at Royal Ascot, where flamboyant racegoers were out in force.

Hats of all shapes and sizes were worn by female punters as the occasion gave them the excuse to show off.

The Princess Royal and her family took part in the traditional carriage procession ahead of the first race but the Queen is not expected to join them in the royal box.

Anne was joined by her husband, Vice Admiral Sir Tim Laurence, and daughter Zara Tindall with her partner Mike Tindall.

Zara was photographed enjoying a laugh with members of the royal family when they stepped from the carriages in the parade ring, and met up with the Countess of Wessex who joined the group.

Among the famous faces was TV judge Rob Rinder, who joked he was waiting for racing tips from broadcaster Clare Balding, who comes from a horse racing family.

“Every time she’s given me a tip it’s come last,” he said with a smile.

He added: “It’s so nice to be around each other post-lockdown. You can feel the joy. And draw in the royal family, it’s a mix of the delightful and really unique British eccentricity.”

One Ascot racegoer was wearing a mock parrot in full flight and surrounded by foliage on her head, and carried another in a cage as her handbag.

The headpiece was created by Inga Kovalerova, a fashion designer who was inspired by a recent trip to Mexico, where she saw a Frida Kahlo exhibition.

Yuan Li, a milliner from London, was wearing a rainbow-coloured hat made from ostrich feathers of different hues in a tribute to Pride month.

“This is a great day for us milliners. This is the place where your imagination can go free. There are no limits for us who work in fashion,” she said.

“I think because Ascot attracts the royals it’s unique and it mixes something quintessentially British with the flamboyant nature of people, which is great.”

Milliner Viv Jenner wore a hat made of pieces of hand-rolled cotton that came down over her face and made walking a little tricky.

She joked: “It took me three weeks to make this, it’s all done by hand and I don’t think I will be doing this again.”

A fashion disaster was narrowly averted for three American friends, wearing dresses in red, white and blue, when their colour co-ordinated hats from Australia were released from US customs just before they flew from Miami to the UK.

Suzy Buckley described their distinctive hats, featuring all three patriotic colours, as “hacinators” – a variation on fascinators – adding: “It came down to the wire and there was lots of drama but it came good in the end.

“We’re paying tribute to the Queen in her jubilee year, we thought we would do it in red, white and blue. We’ve been coming for years, except during Covid, and there’s normally about 15 of us but when it came down to three I thought, let’s wear the three colours.”

In the carriage procession was the Queen’s trusted bloodstock and racing adviser John Warren and his wife Lady Carolyn Warren, daughter of the monarch’s previous racing adviser, the 7th Earl of Carnarvon.

The couple own and run Highclere Stud near Newbury, Berkshire, and Lady Carolyn’s brother is the current Lord Carnarvon, whose ancestral home is Highclere Castle, the setting for Downton Abbey.

Mr Warren kept a close eye on the the Queen’s horse Reach For The Moon, which missed out on being entered for the Epsom Derby, and was favourite to win the Hampton Court Stakes, with jockey Frankie Dettori taking the reins.

But it was well beaten into second place by winner Claymore which led from the start and pulled away from Dettori.

Winning jockey Adam Kirby said afterwards: “It’s sad for the Queen, but Claymore has always been a proper horse.”