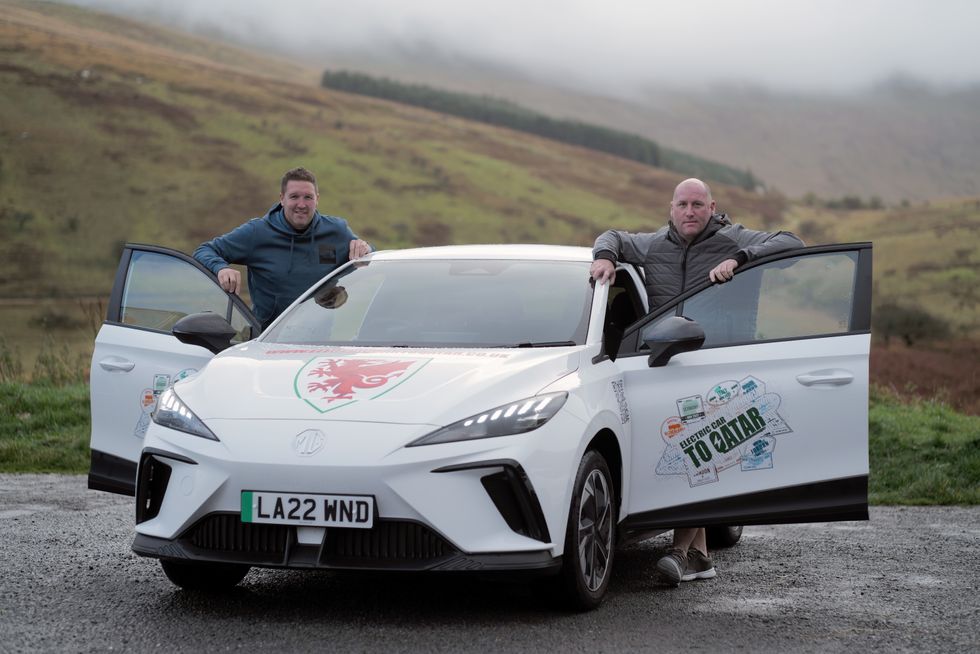 A group of Welsh football fans are making the 5,000-mile journey to the Qatar World Cup in an electric car.

They are leaving Wales from the Football Association of Wales’ (FAW) headquarters at the Vale Resort in Hensol, Vale of Glamorgan, in their solely electric MG4 – nicknamed Morris – on October 28.

The first leg of their journey will take them through France, Belgium, the Netherlands, Germany, Switzerland, Italy, Austria, Slovenia and Croatia before reaching Greece.

A ferry will transport the car from Athens to Israel, where it will then pass through Jordan and Saudi Arabia before aiming to arrive in Qatar on November 18 – a total of 22 days since setting off.

Hello everyone. This week coming I start an epic road trip to Qatar in an electric car for the World Cup. Please fo… https://t.co/63gceF6CAv
— Scott Young (@Scott Young) 1666473695

Mr Smith said: “We know most people think this is a mad plan – we’ve even had Gareth Bale himself sat in the car looking a bit doubtful about whether we can actually achieve this.

“But we’re confident in the car and we’re up for the challenge. We’re driven by both a love for football and a passion for the positive change electric cars can bring for people and the planet.

“There will be bumps in the road for sure but we’ve got loads of support behind us and we can’t wait to get to Qatar and join the other fans and support Wales in their first World Cup in 64 years.

“If Wales can get to the World Cup against the odds, so can we.”

The drivers will be collecting messages of support for the Wales men’s football team as they take on their journey, which is being filmed for a future TV show.

They will stop at football-themed landmarks along the route, including the UEFA HQ in Geneva.

Nathaniel Cars is providing the MG4 car while Go Ev Cymru – a community interest company – will support the challenge.

Neil Mooney, chief executive of the FAW, said the journey represented “all that is good” about Wales and fitted the association’s new sustainability strategy called Cymru, Wellbeing & the World.

“We will check in with the guys every day to ensure they are on the right road to Doha and that they have found a socket,” he said.

“We can’t wait to meet them on the other side before we face the USA in our opener on November 21.”

Please log in or register to upvote this article
footballQatarWorld Cup