George and Charlotte impress at Jubilee concert rehearsals in Cardiff 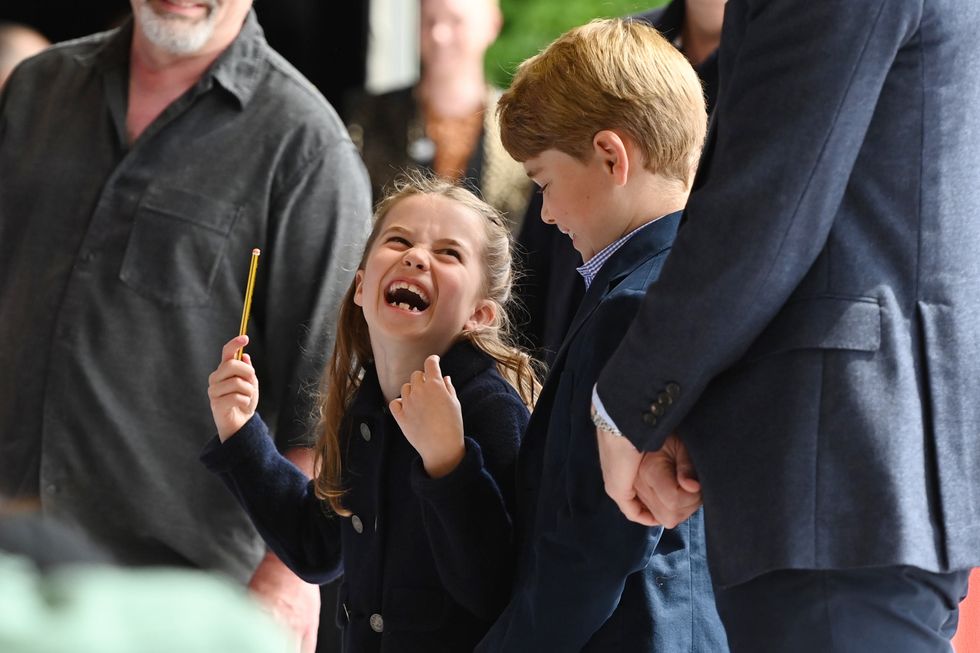 Princess Charlotte laughs as she conducts a band next to her brother, Prince George, during their visit to Cardiff Castle (Ashley Crowden/PA)
PA Wire/PA Images - Ashley Crowden

Prince George and Princess Charlotte impressed crowds at Cardiff Castle with their music and technical skills during rehearsals for a Platinum Jubilee concert set to take place in the grounds.

The royal youngsters joined their parents the Duke and Duchess of Cambridge in the capital city on Saturday, but stole the show as they had a go at conducting the orchestra and playing with the stage lighting and sound.

The surprise visit was the siblings’ first official outing in Wales.

Charlotte, seven, who wore a smart navy frock coat and blue Mary Jane shoes with white ankle socks, was offered a chance to lead the orchestra in a rendition of We Don’t Talk About Bruno from the Disney film Encanto.

As the musicians burst into tune, Charlotte beamed, turning to her mother Kate excitedly.

The duchess, who was dressed in a long red coat by Eponine and earrings by Welsh jewellery designer Spells of Love, also had a shot at conducting and laughed and danced while she tried to find the right rhythm to Sweet Caroline by Neil Diamond.

George, who is one day expected to be given the title the Prince of Wales, took the lead in the technical booth, taking full advantage of the opportunity to play with the sound and lighting decks by asking what all the buttons mean.

The royal family joked and smiled as they took turns with the various switches, laughing as the young prince at chose to turn the volume up high.

William often had his arm around the eight year old, who wore a mini-me version of his father’s blue suit and open-necked shirt, as they chatted to performers and later to crowds of royal fans.

Often encouraging his younger sister to take part, George could also be seen leaning on her shoulder as they watched the Wales Youth Choir for Good practice.

Missing was their younger brother Prince Louis, who stole the show when he appeared on Buckingham Palace’s balcony with the Queen and the royals after the Trooping the Colour ceremony on Thursday.

When asked by members of the public where Louis was, William said he is too young for such visits, saying: “He’s still only four.”

The Cambridges were there to meet performers and crew involved in the special Platinum Jubilee Celebration Concert taking place at the castle.

However, they first met with Wales’ deputy minister for climate change Lee Waters MS and Richard and Rhian Perry, the Lord Mayor and Mayoress of Cardiff.

Mr Perry, who has only been in office a week, said: “It was an honour to welcome them to Cardiff, particularly as it was the prince and princess’ first time here.

“William definitely has an affection for Cardiff and said he would love to come back soon.”

High Sheriff of Cardiff, Rosaleen Moriarty-Simmonds, who was also in the welcome party, said: “The children were lovely and if you think of how young they are, to be suddenly thrust into meeting lots of different people, they were impeccably behaved – although it was still nice to see them being children when playing with all the lights and things.”

On their tour, the family met those headlining the evening concert, including Bonnie Tyler, who was last week made an MBE in the Queen’s Birthday Honours for her services to music.

They also spoke with drumming weatherman Owain Wyn Evans, who regaled them on the drums after Kate complimented his sparkly silver boots and gold-glittered blazer.

Singers and hosts of the show, Aled Jones and Shan Cothi, also greeted the royal party before they spoke with workers from charity Shelter Cymru who are raising money at the event.

The four then got to greet hundreds of people who had waited for them behind barriers lining the inside and outside of the castle grounds, including members of a local navy cadet group, a girls rugby team and dancers from an Indian classical dance troupe based in Cardiff.

Shivani Kothegal, 14, from Rekha Dance Academy said: “William and George spoke to us and complimented our costumes, George giving them a thumbs up when asked by his dad what he thought.”

Siobhan Lewis from Cardiff presented Kate with a bouquet of flowers as the family greeted members of the public who lined the castle.

The 37-year-old, who has cerebral palsy, said she had come to the castle with her mother Tracey hoping to see the royal couple and was shocked to end up meeting them in person.

“It was amazing. I didn’t expect to meet them and we had no idea George and Charlotte would be here so that was very special,” Ms Lewis said.

“William made me feel really at ease and they were all really friendly, all shook my hand. Kate even complimented my red trainers, which have crowns on them.

“I got to present Kate the flowers I brought with me which I told her were called ‘Sweet Williams’, and when she told the duke he laughed and jokingly said, ‘That’s sweet’.”

She added: “I told William that I had met Princess Diana when I was getting treatment at the Peto Institute in Budapest in 1990 and he was very interested in that. I told him I was only seven but remember it well.”

Just before emerging from the castle to a street lined with well-wishers waving British flags, George and Charlotte were introduced to goat and The Royal Welsh mascot Lance Corporal Shenkin II.

The family waved as they set off back to London to join the rest of their family in London for this evening’s celebrations.