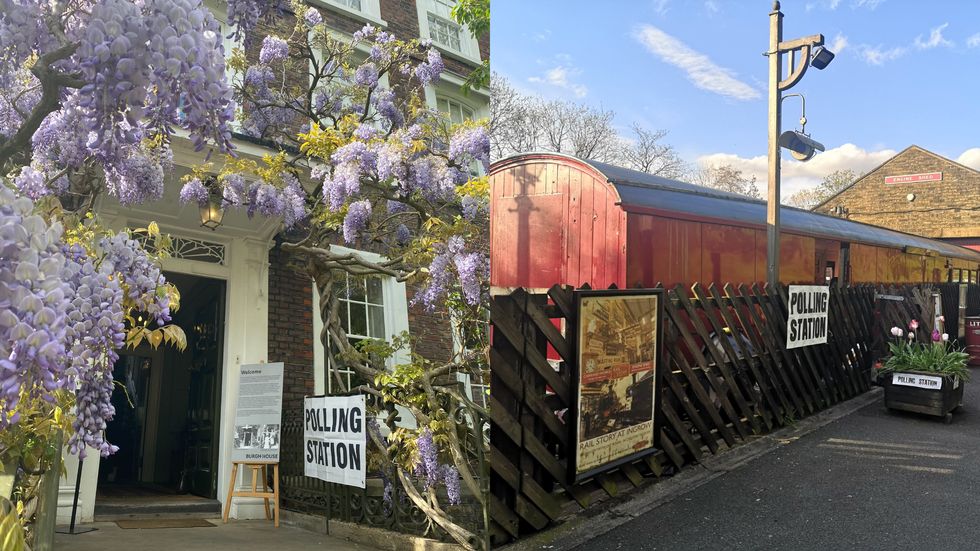 Pictures of two polling stations, one in Hampstead, London (left) and the other in West Yorkshire (@LauraHolland/Twitter and Alison Coulter/PA)

A railway carriage and a historic house with a floral entrance were among the public’s favourite polling stations as people voted in crunch elections around the UK.

Council seats are up for grabs in Scotland, Wales and many parts of England, while Northern Ireland is electing its new assembly.

While some voters exercised their democratic right in the usual venues, others found a little more glitz and glamour at their local polling stations.

Alison Coulter shared a picture of a carriage at Keighley and Worth Valley Railway which was being used as a polling station.

“Best polling station yet (it’s somewhere different every other year) Keighley ain’t all bad,” she tweeted.

The Keighley and Worth Valley Railway is a preserved standard gauge line – and Ms Coulter said she believed the carriage is usually used as a classroom.

Another contender for most interesting polling station was in Birmingham, where voting took place “metres away from a preserved jewellers’ workshop”, according to Adam Hawksbee.

“The Museum of the Jewellery Quarter makes for a pretty great polling station,” he tweeted, along with a picture of the building.

The Museum of the Jewellery Quarter makes for a pretty great polling station If you haven't already - go and vote! https://t.co/6yMgnJwp6N
— Adam Hawksbee (@Adam Hawksbee) 1651763963

While perhaps not quite as unique, other polling stations were described as being “picturesque” and “beautiful”.

Laura Holland shared a picture of Burgh House in Hampstead, its entrance surrounded by purple flowers.

Elsewhere, Leeds Minster was touted as a “top contender for Most Beautiful Polling Station” by Rachael Loftus, who shared a picture of the architecturally significant site.

Paul Spencer, from Reading, was particularly pleased with his polling station and the “very sweet” garden behind.

“My pretty Victorian polling station,” he tweeted, alongside pictures of the Redlands Parish Church and Hall.

“And the little garden behind, too. Very sweet.

“Big thanks to council staff and polling administrators!”

And Vidya Bellur, in Redhill, Surrey, described her local polling station, a 19th century church, as “way too picturesque”.

“Some polling stations are way too picturesque,” she tweeted.

“The bells are ringing @StJohnsRedhill.

“I’m voting, putting the bins out and paying my spiritual respects”.

Pro-gun congressman says mass shooting could 'be done with arrows'

Please log in or register to upvote this article
Electionspoliticspolling stations

Someone explained Wimbledon to Navratilova in mansplain of the decade