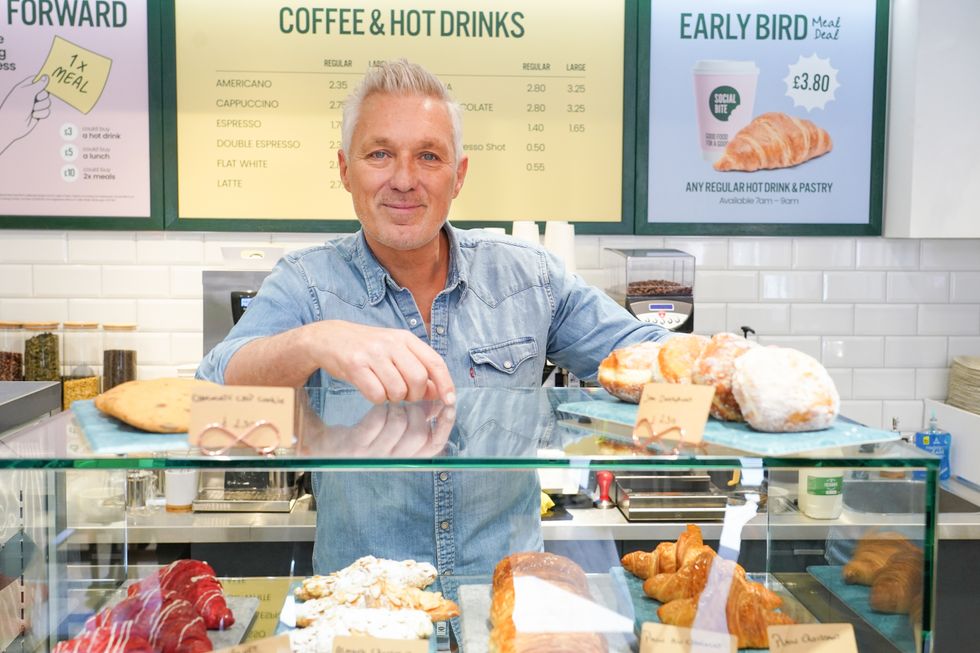 Martin Kemp and Chris Evans were among the celebrities who helped launch a new London coffee shop aiming to end homelessness.

Social Bite is fighting homelessness by employing members of the homeless community or those with a background of homelessness, as well as though their Pay-It-Forward system.

Chris Evans at the launch of Social Bite in London. The coffee shop operates a Pay-It-Forward system where food, drink and vouchers can be purchased for those in need, as well as employing people from the homeless community (Ian West/PA)PA Wire/PA Images - Ian West

Joining radio DJ Evans, 55, and actor and musician Kemp, 60, for the opening were a host of famous faces including Martin Compston, Kate Garraway, Matt Willis and Ashley Roberts.

Speaking at the launch, Evans said: “Having already seen the work Social Bite does up in Edinburgh, I was so glad to hear about the opening of their London coffee shop.

“The rate of homelessness in London is alarmingly high, especially since the pandemic and now the rise in living costs, it’s a very scary time.

“Thanks to charities like Social Bite, we have the opportunity to offer help and make a difference to those in need.”

The 35-year-old founded Social Bite as a small sandwich shop with Alice Thompson in 2012.

The concept developed into a charitable initiative to end homelessness after a young homeless man came into the shop asking for a job.

Social Bite aims for one in four of their staff to come from a background of homelessness.

The coffee shop’s Pay-It-Forward system allows customers who are buying items for themselves to purchase an additional meal or hot drink in advance for someone who is homeless to claim later.

Musician and former Busted band member Willis, 38, said: “I’ve been inspired by Social Bite for a long time now. I slept out in the middle of December in Trafalgar Square at the World’s Biggest Sleepout a couple of years ago, so I was more than thrilled to see this new coffee shop as a permanent fixture here in London.

“Seeing their incredible work forces you to think twice about how lucky we are to be able to have a roof over our heads and money to buy something as simple as a sandwich. I would encourage locals and tourists to stop by.”

Other famous visitors include The Duchess of Cambridge, Prince Harry and Meghan Markle, and Nobel laureate Malala Yousafzai.

Littlejohn said: “We are delighted to be able to launch a new coffee shop in central London. It’s such an incredible milestone for us all here at Social Bite.

“There are many great charities already working in London, but we truly believe that our social impact programme is life-changing and provides something unique. Having helped the lives of thousands we are excited to bring this change to the streets of London.”

In 2019 Littlejohn also created The World’s Big Sleepout – a global campaign to raise awareness of homelessness.

The campaign saw 60,000 members of the public sleep rough in 52 cities all over the world and was supported by Will Smith and Dame Helen Mirren.

The new Social Bite coffee shop is located on The Stand near Covent Garden.