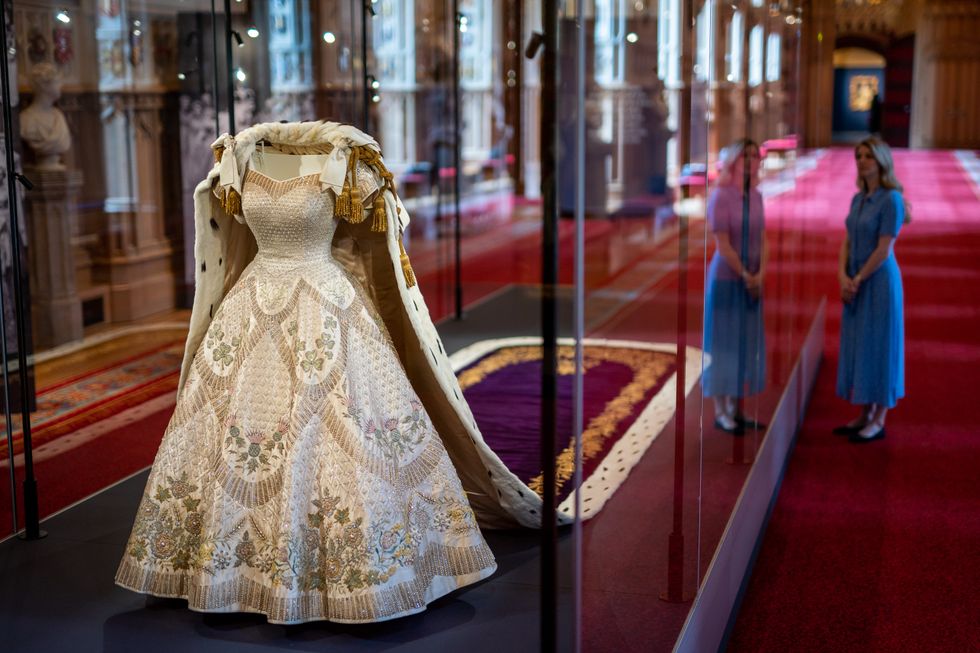 The Queen’s historic Coronation dress, Robe of Estate and diamond jewels have been unveiled at Windsor Castle, ready for public viewing to mark the Platinum Jubilee.

From Thursday visitors will be able to examine Sir Norman Hartnell’s intricate white duchesse satin gown which was worn by the 27-year-old Elizabeth II in 1953.

Embroidered with thousands of seed pearls, sequins and crystals, the design was the last of eight options put to the Queen by British couturier Sir Norman.

The Queen selected the final sketch – a richly embroidered dress featuring a lattice-work effect with an iconographic scheme of floral emblems in gold and silver thread and pastel-coloured silks.

But she requested an addition – that the emblems of the seven independent states of which she was monarch be incorporated, together with those of the UK’s home nations.

The six-and-a-half-metre Robe of Estate, made by royal robe-makers Ede & Ravenscroft from English purple silk velvet, is also on show in the impressive St George’s Hall, the largest room in the Berkshire castle.

It took a team of 12 seamstresses, using 18 types of gold thread, 3,500 hours to complete the Queen’s embroidered cipher and the border of wheat ears and olive branches, which symbolise prosperity and peace.

The Queen Coronation necklace and earrings will be on display in the Lantern Lobby.

Originally made for Queen Victoria in 1858 and comprising 28 diamonds, including the Lahore Diamond gemstone pendant, the necklace was later worn by Queen Alexandra, Queen Mary and the Queen Mother at the coronations of 1902, 1911 and 1937.

The Coronation earrings – a pair of round brilliants and two large pear-shaped pendants suspended from cushion-cut diamond collet studs – were also worn by Queen Mary and the Queen Mother.

On display for the first time is a group of four brooches belonging to the Queen, each representing a nation of the United Kingdom, with a sprig of shamrock for Northern Ireland, sprays of daffodils for Wales, thistles for Scotland and roses for England.

The brooches are made of gold, set with white, pink and yellow diamonds and, for the shamrock, emeralds.

The Queen has worn the brooches on many occasions, often while visiting the different nations.

Platinum Jubilee: The Queen’s Coronation will be on show at Windsor Castle from July 7 to September 26 2022 and is included in the price of a general admission ticket.

The Queen wearing the the Coronation dress and robe in the Throne Room at Buckingham Palace, after her Coronation in 1953 (PA)PA Wire/PA Images - PA

Windsor Castle is open to visitors from Thursday to Monday, remaining closed on Tuesdays and Wednesdays.