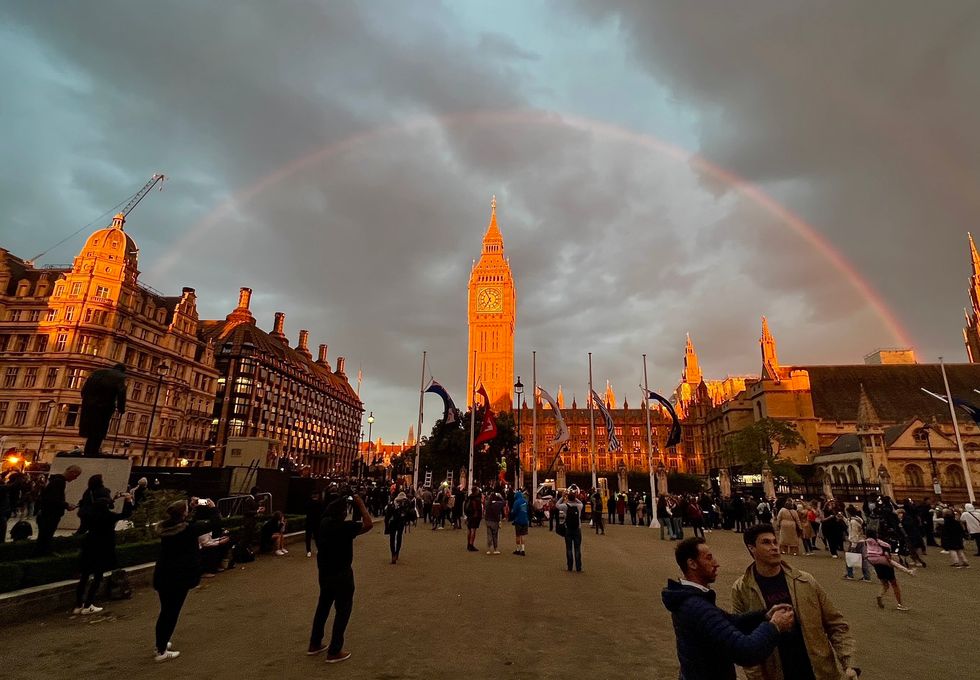 Thousands of mourners were greeted with a “poignant” rainbow over Westminster on Sunday evening as the Queen’s lying in state came to a close.

Westminster Hall opened to the public at 5pm on Wednesday and hundreds of thousands of mourners lined pathways around the Thames for days for their chance to say goodbye to Her Majesty.

Access to the official queue had ended on Sunday night, in order to meet the 6.30am closure of the lying in state period.

Crowds remained even after the doors closed, and were greeted by a rainbow over Westminster Abbey, where hours later the Queen will be laid to her final rest on Monday.

On September 8, the day of the Queen’s passing, a rainbow also appeared above Windsor Castle that was visible as the monarch’s death was announced to mourners that had gathered.

Robert Green, 48, a real estate business owner from London, was visiting Westminster with his family and witnessed the rainbow – which he said lasted three minutes from 6:54pm.

“I wanted to experience the event with my family and to see the amazing numbers of people, from all over the world, gathering around Westminster and still queuing to see the Queen lying in state.

“The light had been building up gradually over the afternoon and it was even more spectacular with the dark clouds, creating wonderful contrast with the orange and red hues of the sunset.

“None of us expected the rainbow though so we were pleasantly shocked to see it, especially as it arced perfectly over Big Ben and the Palace of Westminster.

“It seemed to end right in the centre of Westminster Hall roof – very poignant and quite moving really.”

Those queuing faced hours in the line on Sunday, with waiting times reaching a peak of 14 hours at 10am.

Members of the public, celebrities and foreign dignitaries were all seen queuing – including David Beckham, who spent more than 12 hours waiting.

Mourners were visually upset as they nodded a final goodbye to Britain’s longest-reigning monarch.

Please log in or register to upvote this article
funeralLondonQueenRainbowRoyal familyWestminster