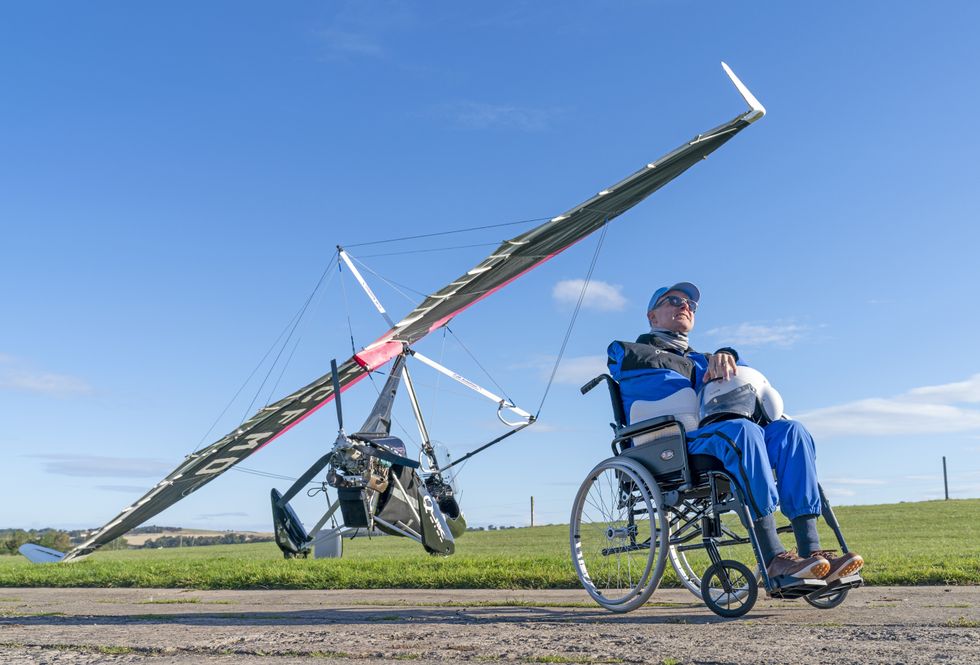 A man recently diagnosed with an aggressive form of brain cancer and who is semi-paralysed has completed a microlight flight to raise funds for charity.

Jamie Fairweather, from Gullane, East Lothian, realised something was wrong with his balance on a trip to Mallorca with his family in May.

The 61-year-old former investment manager, who worked on the finances for street magazine and social enterprise The Big Issue, was having problems cycling and playing golf on the island.

When he struggled to grip travel tickets on the way home, and felt nervous about holding 18-month-old granddaughter Ailsa securely in his arms, Mr Fairweather booked to see a doctor.

In less than a month, he was diagnosed with glioblastoma, an aggressive cancer which results in a life expectancy of 12 months.

Despite being wheelchair-bound and unable to pursue his dream retirement playing golf, cycling and gardening, Mr Fairweather decided to take to the skies to raise funds for the Brain Tumour Charity.

With his wife Mary and two sons, Rory, 29, and Struan, 32, lifting him out of his wheelchair and into the microlight, he took off from East Fortune Airfield in East Lothian at about 9.30am on Thursday.

The 40-minute flight saw Mr Fairweather and his pilot Sarah Curtis soar over his family home in Gullane, Luffness Golf Club, and out to Bass Rock for a glimpse of the gannets.

Family and friends on nearby Goose Greene could be seen spelling out the word “reach” as a nod to the Fairweathers’ fundraiser, titled Reach For The Sky, which has raised almost £45,000, more than four times its initial target.

Moments after landing, Mr Fairweather, dressed in a flight suit, helmet and sunglasses, said: “That was really, really amazing.

“It was a bit scary at the beginning, but once you get your balance and perspective, it’s absolutely incredible.

“We live in the most beautiful part of the country. I loved it.”

Ms Curtis, who has been flying for six years and works as a full-time gardener, initially gave the trip to Mr Fairweather as an experience shortly after his diagnosis, but they soon decided to turn the occasion into a fundraising venture.

“I know medical staff have said ‘don’t do the risky thing’, but we needed to do this,” she said minutes after landing.

“Flying a microlight flight is like flying in a fantasy world, and I am so glad Jamie has had that experience.”

The Fairweathers hope their story will shine a light on what they have discovered is an under-researched and under-funded disease.

A total of 12,000 people are diagnosed every year with a brain tumour, including 500 children, which amounts to 33 per day, and 5,300 die annually, according to latest figures from the Brain Tumour Charity.

“Big pharmaceutical companies are not focusing on this cancer enough,” Mrs Fairweather said.

“We want the fact there is so little research to be raised in Parliament. It was raised a few years ago, but nothing big enough has happened since.

“I don’t know how to express our story in a way that will touch someone’s heart who is in a position to make a difference, to help, to really bring more funding towards this terrible disease, but it has to happen.

The diagnosis completely carpet-bombed our lives. But Jamie has been so brave, he's such a positive person

“We are horrified at the lack of funding of brain cancer, and glioblastoma in particular.

“The diagnosis completely carpet-bombed our lives. But Jamie has been so brave, he’s such a positive person.

“I am glad he did the flight.

“Doctors did warn us, and it’s been a bit touch and go with his health and the onset seizures, but Jamie wanted to do it, he wants to live while he’s still alive.”

Mr Fairweather added: “I cannot tell you the support and kindness of my friends and family who have been extraordinary since this diagnosis, which I would wish upon nobody.

“Their support is something that you know is there, but when you see it happen in front of you, it’s incredibly emotional, and incredibly empowering… it is actually very sad as well.”

Mr Fairweather is currently going through treatment of 30 radiotherapy sessions and is considering the next stage, which might be chemotherapy.

Gina Almond, director of fundraising for the Brain Tumour Charity, thanked Mr Fairweather for “his resilience and determination to raise awareness for the work we do”.

“Jamie’s focus from the very beginning has been on raising awareness of brain tumours so that as many people as possible know the signs and symptoms to look out for with this devastating disease,” she said.

“It is through the amazing efforts of all our supporters such as Jamie that we can change these shocking statistics in the future and bring hope to the thousands of people who are diagnosed with a brain tumour every year.

“We stand with everyone whose lives have been turned upside by this cruel disease and are committed to finding a cure by truly fighting brain tumours on all fronts through our work.”

Please log in or register to upvote this article
charityEast LothianjustgivingScotland

Jordan Peterson breaks down in tears after being called ‘incel hero’