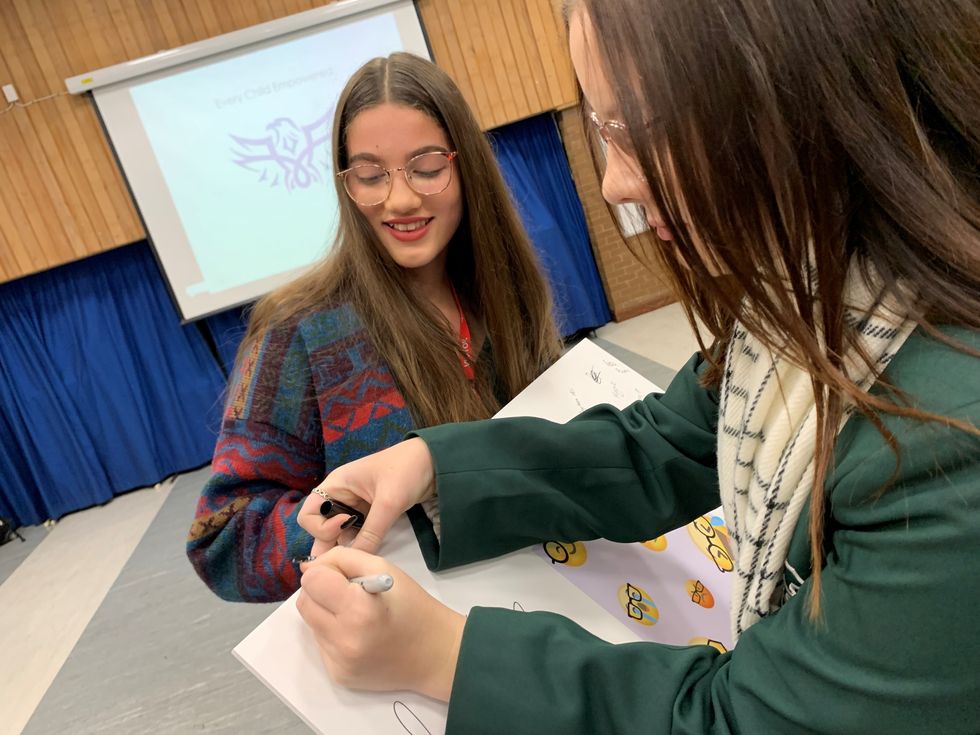 Lowrie Moore, 13, has set her sights on challenging the stigma of the nerd face emoji (Richard Vernalls/PA)

A schoolgirl who got Disney to create a princess with glasses in their hit animated feature Encanto has set her sights on challenging the stigma of the nerd face emoji.

Lowri Moore, 13, a glasses-wearer, had written – aged nine – to the entertainment superpower pleading for its next heroine to wear glasses, but initially feared her request had been ignored after being met with silence.

However, she was later personally credited and thanked by Encanto’s director Jared Bush as inspiration for main character Mirabel Madrigal being shown with glasses.

People who wear glasses are not nerds

Bush, himself a glasses-wearer, later told Lowri “she’s my hero”.

Now Lowri, from Chilwell, Nottinghamshire, has penned a fresh plea – this time to the global organisation which decides what emojis look like – to broaden representation of glasses-wearers among the population of digital icons.

In a letter to the Unicode Consortium, the body responsible for all new emojis, Lowri said: “Unfortunately, the only glasses-wearing emoji I can find is a nerd face.

“People who wear glasses are not nerds.

“But unless we address this, there’s a chance the next generation will grow up believing this lie about themselves.”

After unveiling her campaign to an audience of school children in Burton-on-Trent, she said: “I am just trying to raise awareness for an issue which is large, especially for people my age, like teenagers, just to get glasses on emojis.

“Even if it’s just one (emoji), this is a positive change.”

...why make it a stereotype and make people feel bad?

Earlier, she told her audience that bespectacled emojis were currently limited to a teacher, a grandmother and a nerd-type character.

“It’s very stereotypical and I shouldn’t be put in a box,” she said.

“So many human beings just wear glasses so they can see, so why make it a stereotype and make people feel bad?”

Lowri said although glasses were on-trend in the western world, other parts of the world still had entrenched views of glasses being un-cool.

She gathered signatures from pupils and is hoping more will sign up to her #GlassesOn campaign.

“It’s so simple, we’re not asking that every emoji has to wear glasses – let’s just have that option so people don’t feel negative about themselves,” said Lowri.

“A small difference can go a long way.”

The campaign has the backing of the International Agency for the Prevention of Blindness (IAPB), which earlier this year awarded Lowri its campaigner of the year award.

She added: “It’s such an important issue because certainly, the nerd emoji and having emojis that aren’t representative of people wearing glasses just perpetuates the stigma.

“It’s really important we encourage children and their parents of the importance of looking after their eyes, getting sight tests and wearing their glasses.”

Citing research showing UK children who wear glasses were more likely to be bullied in school, she added social media giants needed to be “encouraging children… glasses are really important”.

She added the IAPB was running a broader World Sight Day campaign aimed at raising awareness about eye health in a world where a billion people have no access to the eye care services common in the UK.

“It’s a serious message but hopefully today we’ve delivered that with a bit of fun,” she said.

Ian Brierly, Paget High School headteacher, where Lowri has launched her campaign, said she was a “terrific role model for young people who they can identify with”.

Please log in or register to upvote this article
DerbyshireDisneyNottinghamshire