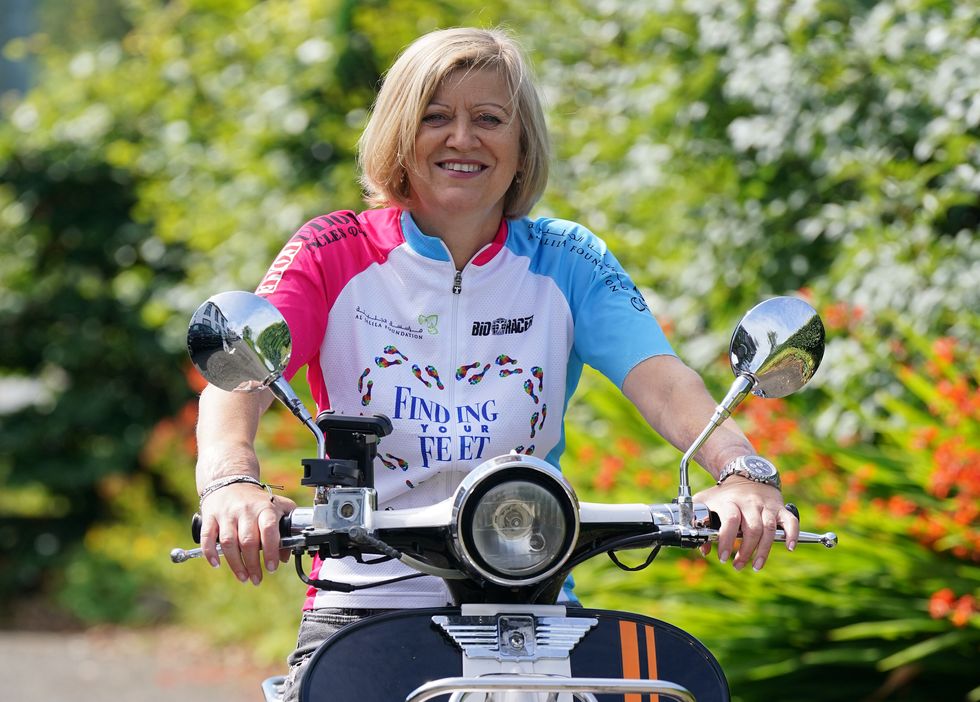 A quadruple amputee who was the first person in Scotland to have a double hand transplant is preparing to travel along the North Coast 500 on a second-hand scooter in a fundraising challenge.

Quadruple amputee Cor Hutton is embarking on the adventure to raise money for the amputees that the charity she founded, Finding Your Feet, supports.

The 52-year-old, from Lochwinnoch, Renfrewshire, had her hands and lower legs amputated in 2013 after suffering acute pneumonia and sepsis, which nearly killed her.

She was given a 5% chance of survival, before doctors managed to perform life-saving surgery.

The mum-of-one was fitted with prosthetic legs and, after five years of trying to find the right donor to matc­h her own blood group, skin tone and hand size, she successfully underwent pioneering hand transplant surgery in 2019.

Now, with her new hands functioning near enough to 100%, she has decided to hop on a scooter again to take on the 500-mile route.

“I am an old-school biker,” she told PA news agency, “and this will be a way for me to get back into it.”

When asked what egged her on to take on this challenge, she said: “I have a bee in my bonnet about getting on and doing the things that I wanted to do previously and haven’t been able to do.

“I was a biker, and I want to get back on the bike.

“I want to show that I can get my life back.

Other bikers on the route will probably tease me about my wee one, but I can't imagine many of them will be doing the trip without their legs

“I’m also inspired by the donor and her selfless family.

“I promised myself and them that I would live life to the full because to be given these hands is such an incredible gift, and the pain that the family goes through is never far from my thoughts.”

Ms Hutton will be riding an AJS 125cc, while her friend, Mark McLean, will be following her trail “on a much bigger, better bike”.

“I’ve managed to go up to 60mph on this one, once, but that was downhill with a lot of wind behind me,” she laughed.

“So it’s going to be interesting tackling the motorway near Inverness on this wee bike.”

While looking forward to the scenic trip, one of Scotland’s most-visited attractions, the motorbike enthusiast was open about the challenges ahead.

“My doctors tell me that I have 95% functionality in one hand and 75% in the other.

“That sounds great, but it’s still a massive effort for me to keep the muscles engaged for long periods of time.

“On the bike I’ll be working the acceleration, which will involve a lot of twisting the wrist, and the brakes, and the indicators.

“And my prosthetic legs make it quite hard to stay steady on the bike, it’s only wee.”

But her main concern is whether the bike will make it to the end.

“The bike can only go about 40 miles before I need to fill it up,” she said.

“I will need to map out all the petrol stations in the area, I can’t imagine there are that many.

“So I have made things quite difficult for myself, which is certainly not the first time.

“Other bikers on the route will probably tease me about my wee one, but I can’t imagine many of them will be doing the trip without their legs.”

This expedition is only the latest in a list of challenges Ms Hutton has already done, including the London Triathlon and becoming the first female quadruple amputee to climb Mount Kilimanjaro.

In a message to the other people with disabilities ahead of her challenge, she said: “There’s so much you can do if you push yourself.

“I want to show people you can get up and do the things you want to do.”

The North Coast 500 route goes around the north coast, starting and ending in Inverness.

Ms Hutton, who received her third honorary doctorate this year, will be setting off from her charity’s premises in Paisley on August 22 and plans to complete the road trip in seven days.

The trip comes ahead of sepsis awareness month in September and World Sepsis Day on September 13.

Finding Your Feet provides vital support to people who have lost limbs.

The charity was founded by Ms Hutton one year after she lost her hands and legs, and provides fitness classes, emotional support, and opportunities to amputees in Scotland.

To donate to Ms Hutton’s cause, visit https://findingyourfeet.net/cors-nc500/

British teen faces amputation after being bitten by spider in Ibiza

Please log in or register to upvote this article
AmputationSepsis