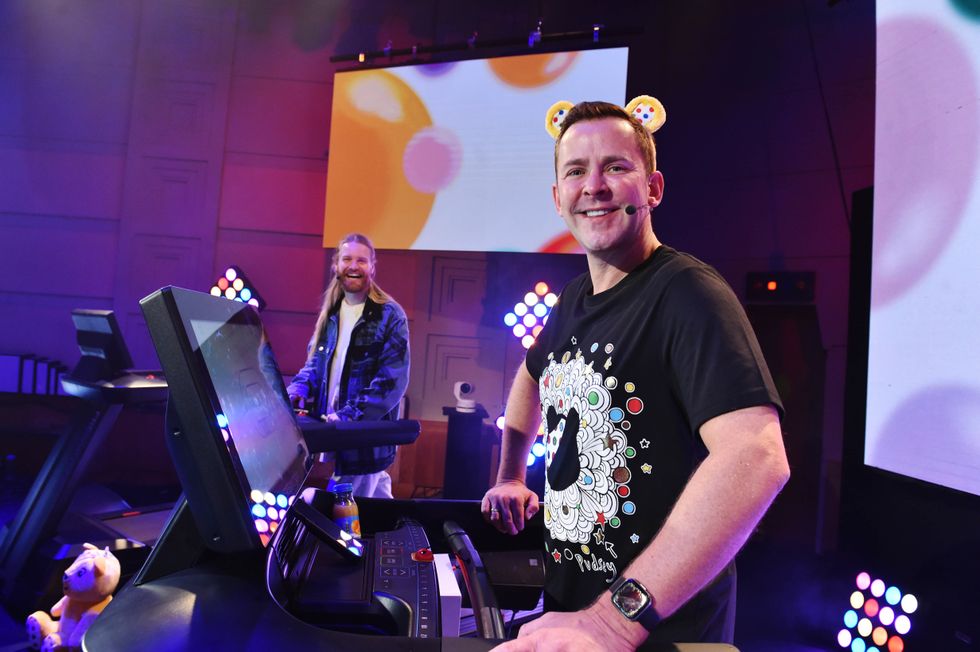 The 49-year-old broadcaster started the Great Scott TreadMills Challenge for BBC Radio 2 on Wednesday and finished on Thursday morning at 8.20am.

Speaking to BBC Breakfast, Mills said: “I just want to say thank you to everyone (who has donated).

“It’s been such a ride, I honestly didn’t think in these times we would even get close to that amount and I’m truly grateful.”

He also said he was a “mixture of exhausted and exhilarated” but has no plans to sleep due to the adrenaline he still feels.

Mills also said he was “glad” to have BBC Radio 2 presenter Zoe Ball on hand to help him off the treadmill due to accidents that have happened before when people have attempted this challenge.

He added: “(Radio DJ) Jo Whiley did a similar treadmill thing in 2014, completed the whole 24 hours, and then fell off the treadmill backwards at the end.

“She actually texted me an hour before we finished (saying) ‘Remember what I said, don’t get off the treadmill yourself’ and it was good advice.”

He told Ball on BBC Radio 2, when he stepped off the machine: “I’ve done it…I can’t believe that it’s over. It’s so incredible…

“I’m in shellshock right now that I’m actually not walking…They are holding me up. I suggested a stretcher if I made it this far.”

He said that at 3.56am on Thursday he almost thought he would not make it.

When asked on BBC Breakfast about how his feet feel, Mills responded saying that the blisters “are not too bad” but two toes were “having an argument with each other and were rubbing against each other quiet ferociously”.

“I’ve been warned once I stop moving it will be difficult to start (moving again),” he added.

During what Mills called his “crazy 24 hours”, famous faces appeared in the Radio 2 studio to show their support.

Mel C, real name Melanie Chisholm, replaced the lyrics of Spice Girls song 2 Become 1 with “when you’ve got to run” to urge the broadcaster forward.

Speaking on BBC Radio 2, the singer said Mills’ run and the donations from the public were “incredible” in these “tough times”.

Mills also said: “I can’t get my head round it, it’s such a lot… What an experience to be part of and what a lot of money.

“Getting so many messages from people who have donated, you know, kids that have donated their pocket money, saying to their mum and dad ‘please give Scott all of my pocket money this week’.”

During the challenge, Broadway and West End actress Marisha Wallace also sang a song from Hairspray and Eurovision runner-up Sam Ryder appeared in the studio after Mills pressed Ball’s Button, a red button he could press up to five times during the challenge when he needed support and encouragement.

Ryder, 33, performed a rewritten version of his song Space Man, which he a retitled Pace Man.

“But truly I just think you’re great, you’ve helped so many kids today, so grab your phones and dial the number and donate.”

Documentarian Louis Theroux, singer Olly Murs, media personality Gemma Collins, broadcaster Jeremy Vine, the cast of The Lion King, Mark Owen from Take That and Strictly Come Dancing’s Joanne Clifton, Nadiya Bychkova and Kai Widdrington also turned up during the 24 hours along with families who have benefited from Children In Need.

The Great Scott TreadMills Challenge was broadcast live on BBC Radio 2, BBC iPlayer and BBC Sounds for the full 24 hours.

The public is continuing to donate to Mills and a final total has not yet been announced.