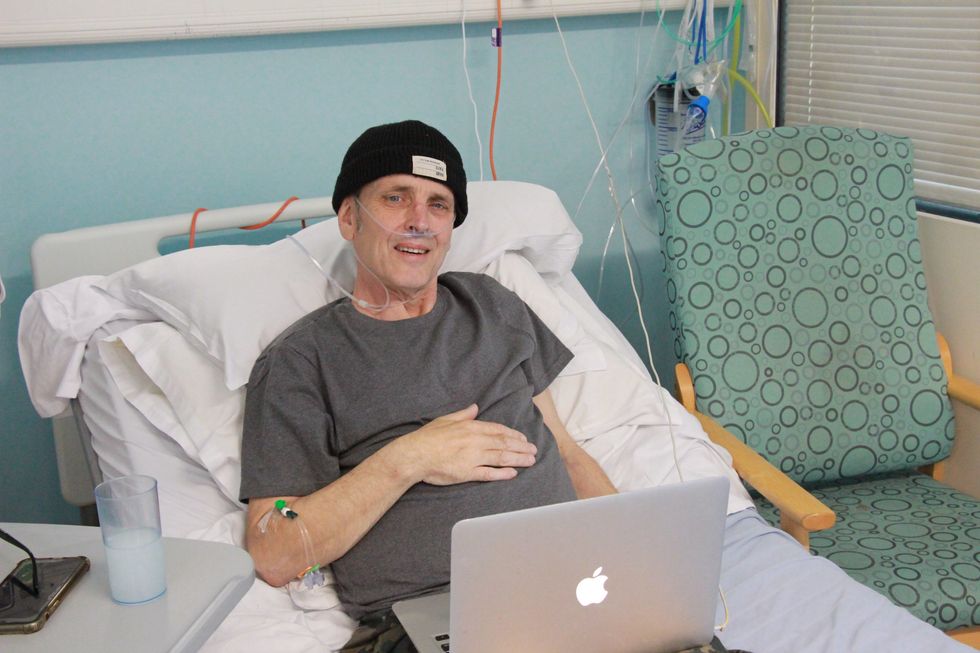 A festival-lover who has been told he has weeks left to live will fulfil his “last wish” and travel to Glastonbury via helicopter after members of the public raised more than £18,000 to pay for it.

Nigel Stonehouse, from Hartlepool, said he will be “forever grateful” after it was revealed hospital staff are organising the logistics to ensure he can attend the festival safely despite his terminal kidney cancer.

Due to breathing difficulties the 58-year-old former bricklayer is being cared for on a respiratory ward at the University Hospital of North Tees, where palliative care nurses Emma Graydon and Robyn Willis are organising his journey to Worthy Farm in Somerset.

“It has to be said, I wouldn’t be going anywhere if wasn’t for these nurses on ward 25,” Mr Stonehouse said.

“They’ve been absolutely marvellous. I’ve been privileged to be a fly-on-the wall and see the tribulations they go through, like on a night shift.

“They’re wonderful people – they really are.”

Mr Stonehouse has been attending Glastonbury since 1986 and this year’s festival will be his 19th in total.

“They’ve all been good, all the way through… they’ve all been special and different and I’ve been privileged enough to see that change,” Mr Stonehouse added.

“It’s always important to go to Glastonbury – we’re a family.”

Asked which act he is most looking forward to this year, Mr Stonehouse said: “Diana Ross! She’s a legend.”

The GoFundMe set up for Mr Stonehouse, entitled Get Nige To Glasto, reached its initial goal of £12,000 just over 24 hours after it was shared by the DJ Fatboy Slim on Twitter.

“Fatboy, what a geezer – you are a man,” Mr Stonehouse said.

“I’m over the moon, I’m one of Fatboy’s disciples, we’re a family.”

The fundraising total continued to climb to over £18,700 on Wednesday evening, while a couple in a local village have offered their house to Mr Stonehouse and his friends to use over the course of the festival.

The fundraiser was founded by Mr Stonehouse’s friend, Maria Beggs, who said: “As soon as he told us he was ill, Nigel was saying he wanted to make it to Glastonbury.

“I just can’t get past the public support. He’s got so many people behind him.

“The only thing that could make it even better would be a shout out from Diana Ross during her set on Sunday!”

Ms Willis, a specialist palliative care nurse, said: “It’s very important to fulfil that last wish. He wants to do this.

“It’s not just about going to Glastonbury, it’s about the time with his friends. It’s that one last occasion.”

Please log in or register to upvote this article
Fatboy SlimGlastonburyHartlepool