Thousands of toys delivered to Ukrainian children have helped them ‘shine’ 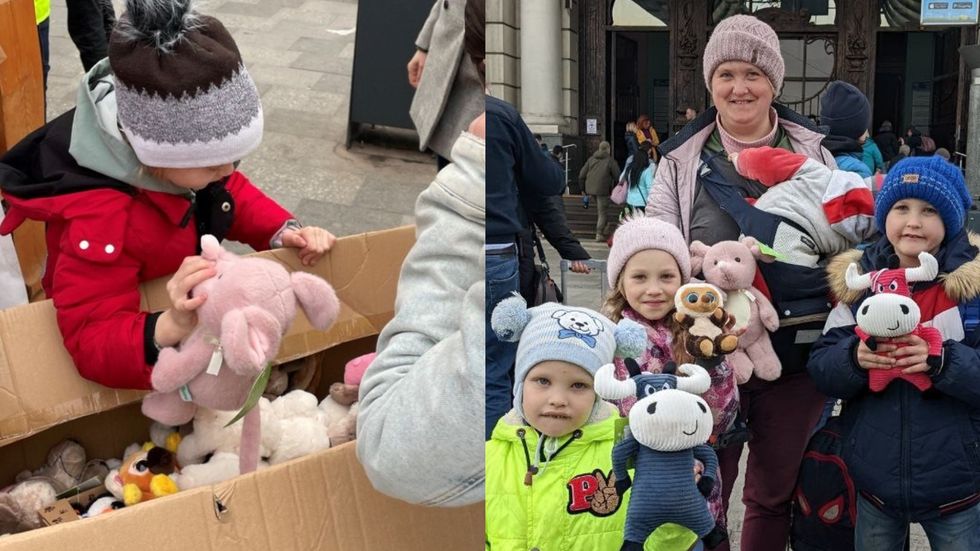 A man who has organised the delivery of thousands of toys to children fleeing their homes in Ukraine said the project is helping families to “shine” and “open up”.

Dimko Zhluktenko grew up in Rivne, western Ukraine, and is helping to distribute toys to children passing through Lviv’s main railway station, which he described as a “refugee hub for literally the whole country”.

Mr Zhluktenko has raised more than 70,000 dollars (£55,000) to provide refugees with humanitarian aid and items such as stuffed toys, plastic cars and sweets to children, describing his idea as something that will make them “feel welcome” in Lviv.

“From what I’ve seen, it makes a difference,” the 23-year-old told the PA news agency.

“Sometimes I feel that people are scared to come here or sceptical.

“My idea is to have them feel welcome, to break that stupid stereotype they might have in their head and make them feel comfortable and change the perception they had of western Ukraine too.

“And especially with the parents of these kids who are like, ‘don’t talk to anyone, don’t bother’, but once they see the support that we are giving to them, they just start to shine – they open up.”

Mr Zhluktenko initially spent a lot of his own money providing humanitarian aid to refugees but soon began appealing to Twitter followers, asking for contributions by Paypal.

One friend got in touch about a community of Ukrainians in Luxembourg who had been donated 21 pallets of toys they were willing to give to Mr Zhluktenko for his project.

“I’m privileged to be able to contribute towards Ukraine’s victory (and) at the same time, it feels frustrating, it feels sad sometimes and you’re feeling helpless,” he said.

“You have no idea whether the effort that you’re doing actually makes any difference.

“But then again, with all of the happy words from the kids and the parents that they say to me… because of that, it brings me back to reality.”

Word games, drawing books, pens, crayons, small bicycles and prams were all included in the donation of toys Mr Zhluktenko organised to be transported from Luxembourg.

He is using storage units to house the toys while they are distributed to children at the station, where volunteers are on hand to give each child one or two to take with them.

Mr Zhluktenko said the donations are of “huge value” to refugees who have been through a difficult time.

“Imagine you have to flee or leave your home or your friends, animals, behind,” he said.

“And you have to take a train which takes you through the whole country for 25 hours and the train is (at its) fullest.

“The very first (few) weeks, they were not limiting the amount of people that can get in, so on many of the trains they were not even able to lay down to sleep at night – they were just sitting like that for 25 hours straight.

Many of the toys were donated to a Ukrainian community in Luxembourg, who were able to get them to Lviv for Mr Zhluktenko’s project (Dimko Zhluktenko/PA)

“The quicker Ukraine wins the war, the quicker the last children will have to be displaced and they will be able to come back to their homes,” he said.

“But if you just cured the symptoms, you will obviously die – so we need to find the root cause of the issue and in our case, it’s the Russian invasion.

“(I know) that what I’m doing is actually making a difference in a positive way for Ukraine.”

Please log in or register to upvote this article
LvivRussiaUkraine