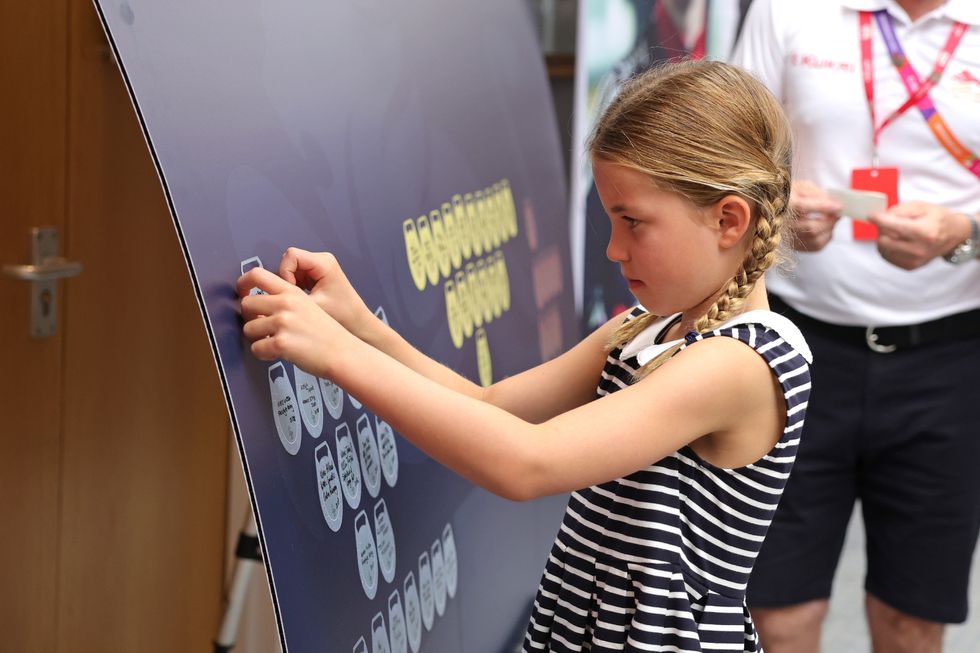 Princess Charlotte has been described as a “charming” young girl after her first family engagement with the Duke and Duchess of Cambridge.

The seven-year-old princess joined her proud parents in Birmingham – host city of the Commonwealth Games – to learn about a programme preparing the next generation of sportsmen and women for future events.

Charlotte appeared curious about her surroundings and the people around her at Birmingham University, and a little apprehensive at times, but received a reassuring arm around her shoulder or word in her ear from William, and held Kate’s hand at other moments.

The young princess revealed gymnastics was the sport she liked most and joined a nutritional workshop helping her parents place pictures of foods like nuts, bread and grapes into the right groups, whether protein, carbohydrates, antioxidants or healthy fats.

At one point Charlotte was asked to update a Team England medal board and added a bronze, won in the men’s team table tennis event, and a silver from the lawn bowls men’s pairs.

She was also taken by William and Kate to events at the Commonwealth Games and was photographed grinning during swimming heats and later joined her parents to watch a hockey match.

He said: “I did notice the duke and the duchess, as we were trying to do, include Charlotte in the conversations – we were very mindful of that and it was really very evident the duke and duchess were doing that to, I suppose, include her and reassure her.

“She was charming, very willing to put the medals on the medal board, and she asked the right question, which was ‘where exactly should I put this?’. It was by date and she checked.

“She really, really loved seeing the swimming, but she’s interested in the gymnastics, and while they’re trying lots of different sports at home, I understand, when I asked her about sport she answered very easily and said ‘it’s gymnastics that I like’.”

When the Cambridges arrived they met senior sporting executives and Kate turned to her daughter and said: “You liked the swimming, didn’t you?” and Charlotte nodded.

The princess, with her hair in pigtails and wearing a sleeveless summer dress and sandals, stood with her hands behind her back looking around, and a few moments later William put an arm around her shoulders.

The Team England Futures programme is a partnership between SportsAid – which Kate supports as patron – Sport England and Commonwealth Games England, which aids the development of promising athletes and aspiring support staff, giving them the opportunity to attend the Games to see behind the scenes.

Before the Games the aspiring sporting stars benefitted from online learning covering a wide range of topics and mentoring from senior athletes.

Charlotte sat between her parents as they chatted to two power weightlifters, Tom Smith and Lottie McGuinness, who were joined by veteran competitors.

Speaking about the Games, Ms McGuinness said: “The atmosphere is incredible, everybody is socialising with everybody else.”

Nutritionist Jenny Tschiesche set the Cambridges and their daughter a food challenge, and said afterwards: “They did really well, and so did Charlotte, she picked up the picture of the chicken and put it in the protein section and she did the same with the beans.”

The couple also watched when twin beach volleyball players Joaquin and Javier Bello pedalled exercise bikes powering blenders filled with fruit – a gadget that combined the competitive nature of athletes and their interest in nutrition.

Charlotte and her parents were advised to cover their ears as the brothers pedalled the bikes to produce smoothies.

Commonwealth Games equipment to be given to community groups

Please log in or register to upvote this article
CharlotteCommonwealth GamesRoyal