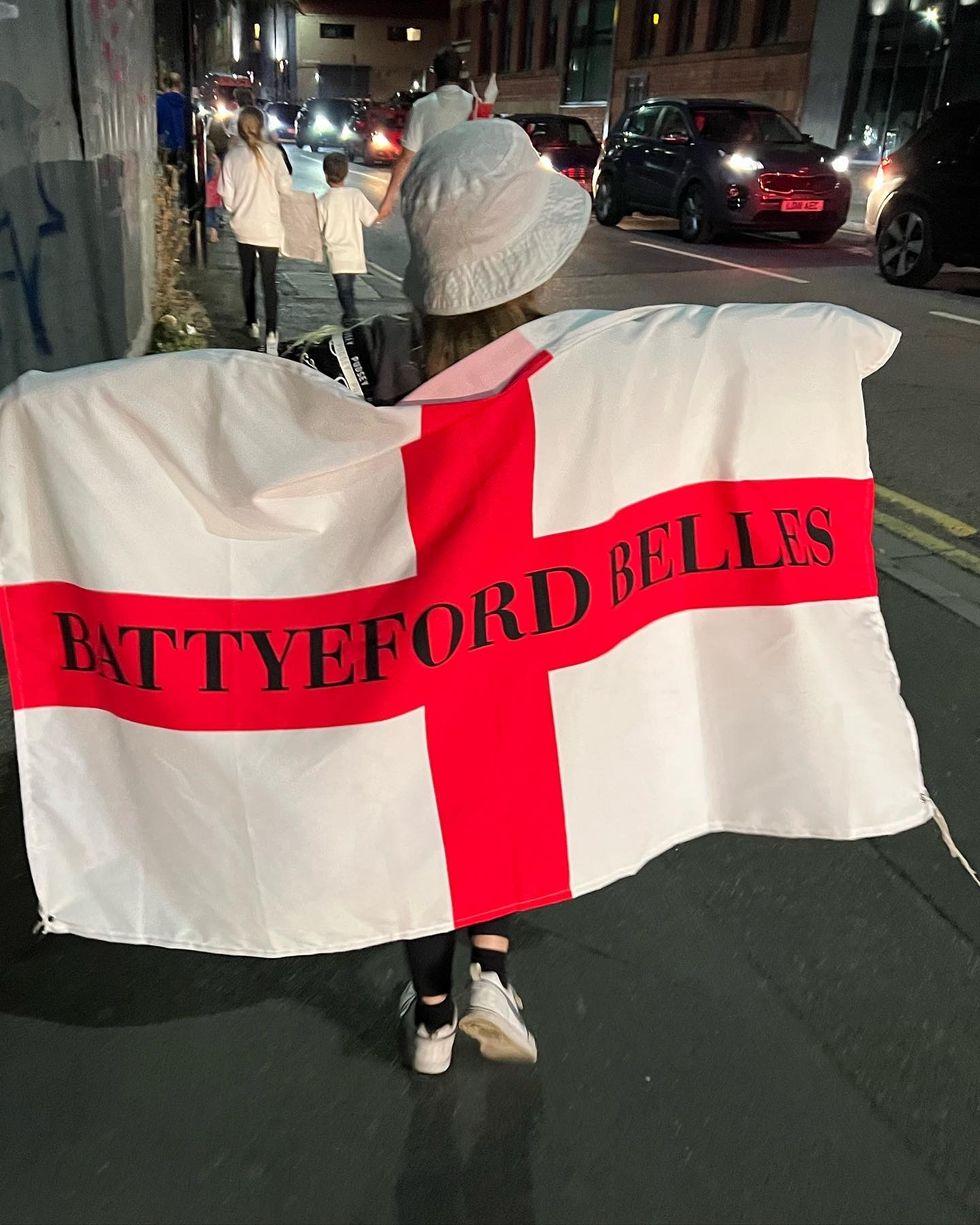 Kerry Laville, 42, a trainee teacher, attended the England v Sweden semi-final match with her daughters Taylor, 12, and Lauren, nine, her husband Damian, 45, and son Callum, six, when something unexpected happened.

She was “excited” to see that a white and red England flag with the words “Battyeford Belles”, in reference to the club her daughters play for, made a live TV appearance on the BBC.

“The flag was a nod to the team and everyone was so excited to have seen it and sent over screenshots they’d taken of the telly. It was almost like we had taken the team with us,” Mrs Laville, who lives in Dewsbury, West Yorkshire, told the PA news agency.

The girls have played for the female football team at Battyeford Sporting Club, which is referred to as “the Belles” and is near Huddersfield for around 18 months.

The flag was bought before the quarter-final and it is set to become a seasoned traveller as it could make an appearance on the Lavilles’ family holiday to Dubai in August.

Mrs Laville described the atmosphere of the game as “incredible”.

“It was lovely seeing the excitement in Lauren’s face when England scored a goal. Her eyes were sparkling and they say eyes never lie when you smile,” she said.

Football has played a key role in the household, with Mr and Mrs Laville being avid watchers of football matches before and after their children were born, which could have been the reason why their daughters took to the sport like a “duck to water”.

“Lauren’s actually going to be starting with Leeds United in September, with their emerging talent centre,” she said.

Mrs Laville said she hopes the Women’s Euros will “encourage more girls to realise that there are local girls’ teams”.

She added: “Unfortunately, not every area has a girls’ team, which might be because there are not enough girls who want to play, so hopefully this is going to grow it on a grassroots level.”

The family are set to attend the final at Wembley on Sunday with their flag, and potentially less face paint than they wore at the semi-final.

“I’ve told my husband that he can’t have his face painted completely with the England flag like on Tuesday as the paint went everywhere,” she said.

“His shirt is in the washer at the moment actually. I’m hoping that the smears of red paint are going to come out.”

Lauren and Taylor have also planned to paint the England flag on their nails, and the whole family hope to link up with more Battyeford Belles and Instagram contacts to “enjoy” the day.

Please log in or register to upvote this article
EnglandEuro 2022footballLionessesYorkshire