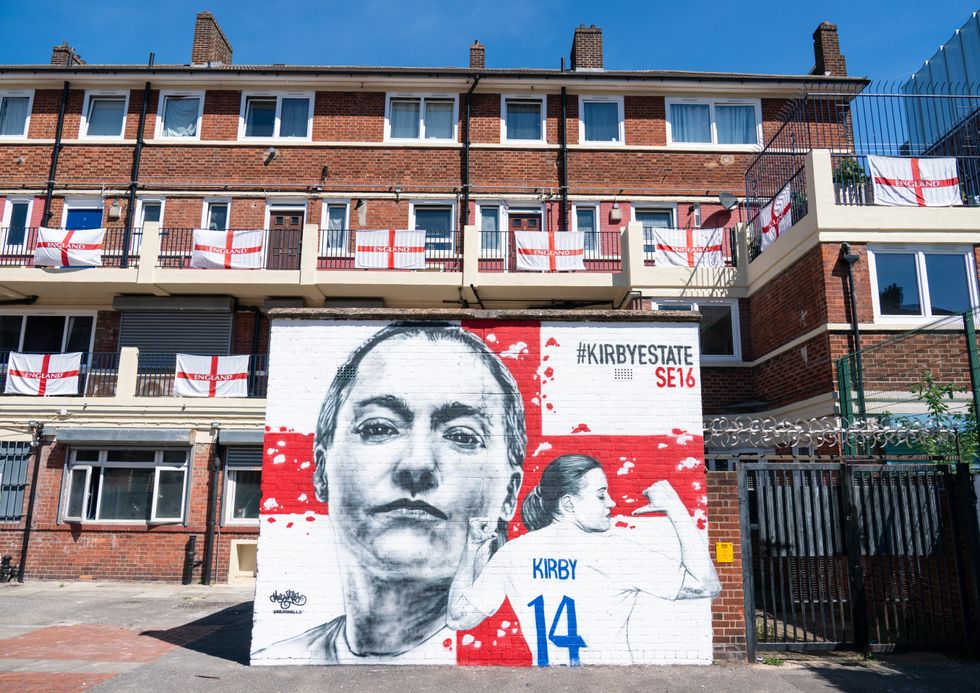 A London estate famous for its support of England during international tournaments has lived up to its name with its backing of the women’s national football team.

The Kirby estate in Bermondsey, south London, has unveiled a mural of England forward Fran Kirby ahead of the Lionesses’ game against Norway on Monday.

The artwork was created by street artists MurWalls, who are behind portraits of Raheem Sterling and Gareth Southgate in the past.

Chris Dowse, who has lived on the Kirby estate for 12 years, got in touch with the street artists after he saw their work at last year’s men’s Euros final.

Mr Dowse, a member of the Friends of the Kirby estate, said: “If the mural can inspire little children on this estate and around the country that it’s OK for girls to play football like boys, then it’s only going to go onwards and upwards.”

He added that “there was only ever going to be one player” on the mural and that it was “meant to be”.

Mr Dowse said it was “massively important” for the women’s game to develop.

The estate is renowned for its celebration of football tournaments and has 300 flags out to demonstrate their support.

Marc Silver, 44, the founder of Murwalls, said: “The patriotism that goes on there [at the Kirby estate] is out of this world. I was in awe of what they achieved.”

He added: “We hope this mural will inspire Fran Kirby and the Lionesses to win tonight and hopefully go on to win the whole tournament.”

Mr Silver said when he arrived someone suggested Fran Kirby because her surname matched the name of the estate.

“The stars were aligned,” he added.

The mural was started on Sunday night and completed at around 8am on Monday.

The mural features a big portrait of the footballer and another drawing of her pointing to her name on the back of the shirt.

The Lionesses official Twitter account shared a picture of the street art saying: “The Kirby Estate does it again! Amazing mural Murwalls”.

Adidas dragged into football shirt spat between Morocco and Algeria

Please log in or register to upvote this article
footballSport