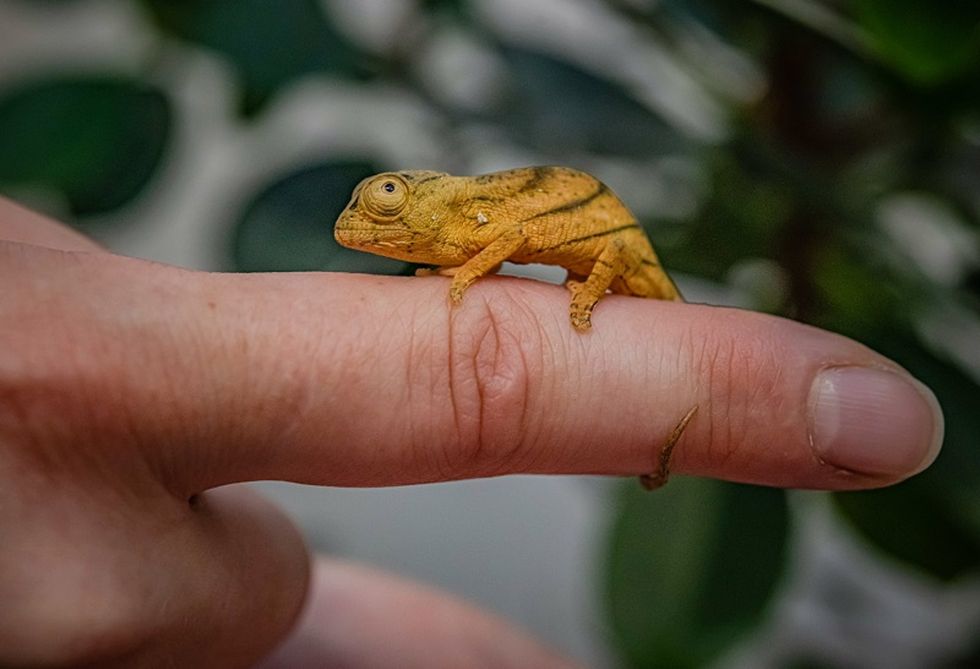 Chester Zoo has celebrated the birth of 10 chameleons, with the breeding of the “highly threatened” species claimed to be a “first” by a UK zoo.

Staff have welcomed 10 Parson’s chameleons, with the first hatchling arriving on June 30 this year. The species’ existence in the wild in Madagascar is under threat from deforestation.

A total of 17 eggs remain in incubation while a leading member of the reptiles team at the zoo said the skills learned in the process may “help save some of Madagascar’s other threatened reptile species”.

Jay Redbond, team manager of reptiles at Chester Zoo, said: “To be the first UK zoo to successfully hatch a clutch of Parson’s chameleons is a momentous and exciting event for the team here – but most importantly it’s a major breakthrough for the species.

“The levels of intricate care and attention to detail provided by the team over a number of years to achieve this breeding success has been truly remarkable.

“We’ve had to carefully replicate the seasonal variations of Madagascar and mimic the exact same conditions these chameleons experience on the island, right here in Chester, and that’s no easy feat.

“Every slight tweak to temperature and humidity each day and night has been meticulously recorded and, now that we’ve cracked this, we believe we’ll be able to take this information and apply it to help save some of Madagascar’s other threatened reptile species.

“This important clutch of eggs, along with all that we’ve learned along the way, will now help us play a part in preventing the extinction of this incredible species, and many others just like it.”

The first of Chester Zoo’s hatchlings weighed in at 1.5 grams and measured 2cm long (Chester Zoo/PA)

The Parson’s chameleon is the world’s largest species of chameleon and hatchlings have an incubation period of nearly 600 days.

The first of Chester Zoo’s hatchlings weighed in at 1.5 grams and measured 2cm long and they are expected to grow to around 70cm and weigh 800g.

Please log in or register to upvote this article
AnimalsChester Zoo