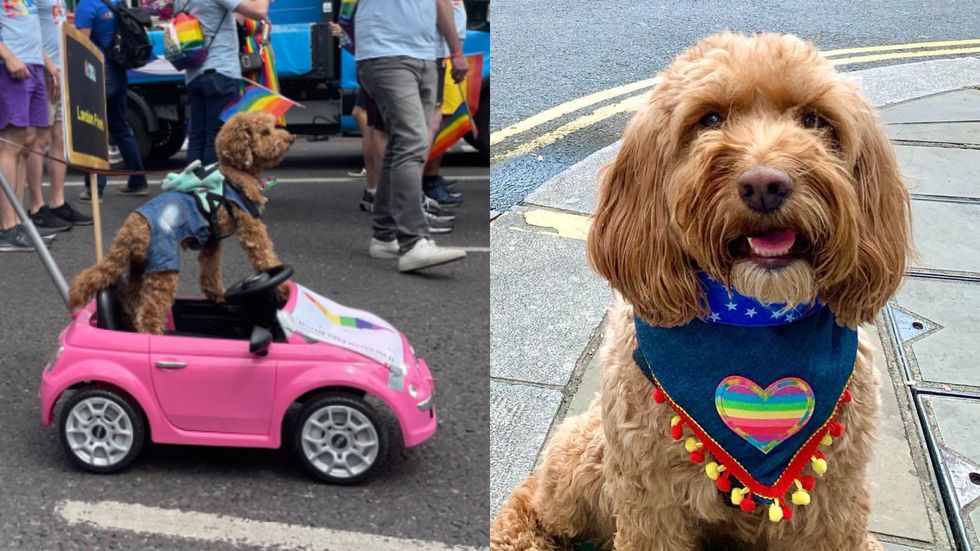 Humans were not the only ones celebrating Pride in the capital on Saturday as dressed-up pups also took to the streets.

Dogs sporting rainbow wings, pride bandanas and following the march at the wheel of a hot pink mini car were photographed and posted on social media.

They joined thousands for the 50th anniversary of the UK’s first Pride parade and for what was also the first Pride in London since the pandemic.

Attendees said seeing the dogs donned in colour added “that extra level of joy” to the day.

“Seeing pups march as well with their owners added that extra level of joy to an already great day,” Frankie Fermi, 33, told the PA news agency.

“It was great to finally be able to march again post-Covid.

“The atmosphere was amazing and all in all it felt really good to be able to be around other members of the LGBT+ community,” the social media manager added.

One canine was pictured at the helm of a mini pink car, standing on all fours as Pride flags were waved above.

Another couple of corgis were spotted marching wearing rainbow-coloured leis.

A pup named Lady posed for the camera while wearing a Pride bandana, complete with a rainbow heart.

Milo and Apollo were pictured by their owner, Mark Pakianathan, during the parade.

Others resembled fairies in their Pride outfits (Frankie Fermi/PA)

The event, which organisers are called the “biggest and most inclusive event in history”, also features a line-up of artists performing across four stages around Central London as popstar Ava Max closes the show on the Trafalgar Square stage.

Homeowner giving away 'cursed fridge' haunted by their stepmother

Woman claims restaurant discriminated against her for being 'bigger'

Please log in or register to upvote this article
diversityLGBTQLondonPride