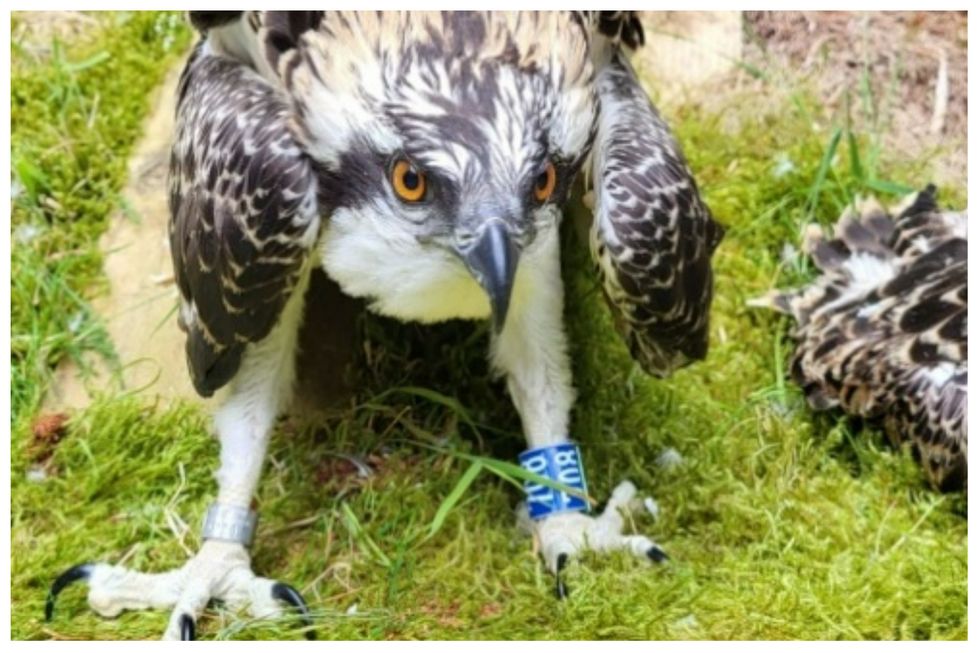 A young Scottish osprey hitched a ride on two boats during his first attempt at migrating, a team of researchers has found.

Glen, who has been fitted with a GPS tag, had already taken a while to flee his nest in Glentress in the Scottish Borders.

When he made it to the tip of Cornwall, the bird of prey disappeared for two days and was presumed dead.

However, at about 10pm on Tuesday, his tag pinged at a location on an outcrop of rock off the north-western tip of Spain.

Sacha Dench, who has been dubbed the “human swan” for her expeditions following bird migrations, is one of a team of people tracking the osprey to learn more about the migration behaviours of the species.

The Australian-born conservationist downloaded a map of Glen’s mysterious disappearance, which showed unusually straight lines and 90-degree angles for part of his flight.

She found the bird had stopped on what was initially thought to be a fishing vessel in the Bay of Biscay for many miles, first heading south-west, then back north-east.

Ms Dench said while aboard, Glen appeared to realise he was travelling in the wrong direction, so he then took flight towards Spain, eventually hitting land.

She discovered that when the bird set off from Cornwall, the wind was blowing against him and it is likely he landed on the vessel due to exhaustion.

Fascinated by this information, Ms Dench set out to track down the crew to thank them.

After speaking with boat company VesselFinder, she found Glen had in fact hitched a ride on a second ship before flying to Spain.

The first was bulk carrier Agia Triada, going south to Dar es Salaam in Tanzania, and the other the Eco Nical, an LGP tanker heading from Morocco to Immingham back in the UK.

VesselFinder graphics show Glen was on the first ship for about 80-90 nautical miles and on the second for about 50 before he realised it was going the wrong way and took off.

Ms Dench said a representative of the owners of the Eco Nical has said they regard Glen’s landing on their ship as good luck.

She said: “I’d like to particularly thank Alexander Tonev from VesselFinder for all his help in solving the mystery.

Does that look like he hitched a short ride on a boat doing transects? @MarineTraffic @VesselFinder @shipfinder… https://t.co/rB4wWrhc5L
— Sacha Dench (@Sacha Dench) 1663104848

“It’s a good job the internal ‘GPS’ in Glen’s brain realised he was going in the wrong direction – otherwise he would have ended up not that far from his starting point.”

Ms Dench said she has been in touch with the owners of both boats to see if any of the crew noticed Glen – and if so, she hopes to thank them for giving him a lift as she believes it saved his life.

She added: “Glen has now started heading south into Spain and we are all keeping fingers crossed for the next stages of his journey.”

Ms Dench, who was given the name “human swan” for flying 4,300 miles on a paramotor across Russia and Europe in 2016 to track the Bewick’s swan, is currently on the Flight of the Osprey expedition, a conservation project in collaboration with UN agencies, scientists, media and governments.

Despite still recovering from a mid-air collision in September last year, which claimed the life of her cameraman Dan Burton, Ms Dench is leading a team of nine people to follow the migration route of ospreys, more than 6,200 miles from the Moray coast to Ghana through 14 countries – a trip that will last about four months.

She said some 70% of juveniles fail to return for breeding, and the team wants to know more about why.

Glen is being tracked along with his two brothers; Tweed, who has been in Portugal and seems to like it there, and Kirk, who was in Ireland at the beginning of September but is now feared lost.

The hunky King Charles equerry who made viewers swoon is married

Please log in or register to upvote this article
BirdsEnvironmentOspreyScotlandSpain