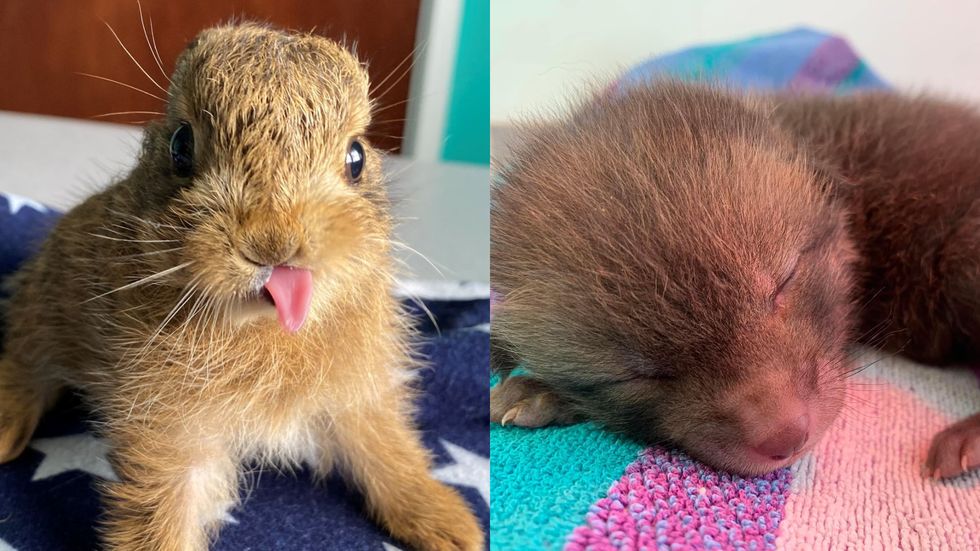 Spring has brought an influx of baby animals into RSPCA care in England and Wales.

The “baby boom” is the result of a surge in calls for RSPCA officers and wildlife staff who attend to animals, such as birds, fox cubs and ducklings, in need of urgent care.

One tiny fox cub is being looked after by staff at West Hatch Animal Centre in Somerset after it was found alone by concerned members of the public.

The first duckling of the season was rescued in March (RSPCA)

Another litter of fox cubs was rescued by an off-duty vet who was out walking in Swaffham in Norfolk at the end of March.

The vet took them in overnight and contacted the RSPCA.

They were then put into the care of East Winch Wildlife Centre for specialist care, where they are now doing well.

Staff from the same centre kept a rescued cygnet from Lincolnshire warm with a cuddly toy swan he was able to snuggle up to.

He was found by himself, as was a leveret who was spotted hiding under equipment at a park in Sedgeford, Norfolk, and looked after until his release on April 9.

A number of baby animals were rescued in Somerset, including the RSPCA’s first duckling of the season who had been found alone and was also handed into the care of West Hatch Animal Centre.

Four baby rabbits were rescued and taken to be hand-reared after being found in a nest by a group of builders in Scarborough, North Yorkshire.

An RSPCA inspector went to collect the rabbits, who were huddled in a delivery bag of sand and thought to be between 12 and 14 days old.

They were taken in by an experienced rehabilitator before their release.

Other animals rescued by staff at the RSPCA include badger cubs, otter pups and two owlets spotted in Rochdale, Lancashire.

A team member could hear the owlets’ mother calling for them nearby – so she kept them warm in a cardboard box before placing them at the base of a tree and allowing them to climb back up to their mother.

RSPCA advice for the public when dealing with a baby animal is to “wear suitable gloves, quickly place into secure cardboard box with ventilation holes, lined with towel or newspaper” and “keep the animal calm and quiet” before taking it to a nearby vet, RSPCA centre or local wildlife rehabilitator.

Please log in or register to upvote this article
AnimalsOwlrabbitRSPCA