Thor the wandering walrus turns up again – this time in Northumberland 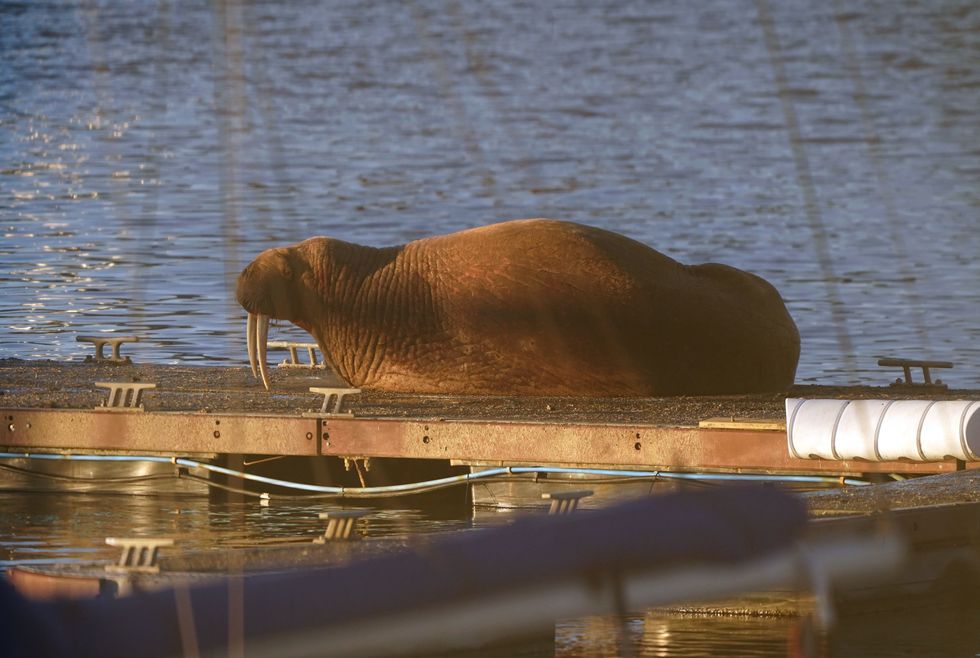 A wandering walrus who delighted thousands in Scarborough on New Year’s Eve has turned up 100 miles further up the North Sea coast.

A large crowd quickly gathered in the Northumberland town of Blyth on Monday lunchtime after a walrus was spotted resting on a wooden pontoon at the yacht club.

The assumption is that it is Thor, the juvenile male who parked himself on a slipway in Scarborough harbour on the evening of December 30 – just yards from the town’s cafes and slot machines – and slipped back into the water just under 24 hours later.

Thor, who was the first walrus recorded in Yorkshire, had swum round from the Hampshire coast, where he was spotted earlier in December.

Scarborough Council decided to cancel its New Year’s Eve fireworks display as part of the multi-agency effort to stop the massive animal getting agitated and coming to harm.

The new sighting of Thor coincided with the publication of a report from British Divers Marine Life Rescue (BDMLR) into his visit to the Yorkshire seaside resort which said up to 500 people were watching his antics at any one time with thousands visiting the scene.

The report said most of the public were “taking photos and standing in disbelief – presumably floored by seeing a walrus!”

The BDMLR said it was alerted to Thor’s arrival in North Yorkshire at 11.30pm on December 30th by staff from Scarborough Sealife and their initial response was: “Are you joking?”.

It said that Thor moved his position as the tide level moved, with concerns at one point that he was heading towards the public road at the top of the slipway.

It also noted that he “demonstrated some natural male behaviour over the evening”.

The report said: “By 4pm (on December 31) Thor was becoming slightly more active, and at 4.30pm he sat up, turned around, and promptly slid off into the harbour.

“A cheer erupted from the crowd while BDMLR medics scrambled with radios to track which direction he went. This was assisted by some local youngsters who saw him swimming and we confirmed that he had swam off out of the harbour.”

It said most of the visitors behaved appropriately but police had to deal with “a small handful of difficult members of public, and one person breaking cordon and entering private property attempting to access the walrus for photographs.”

At all times the crowd was at least 350 thick, at one point seemingly over 500 people were there with more bodies continually appearing from all avenues, roads, and even bus trips

The BDMLR said: “Kind public asked many questions, offered and bought hot drinks and food, and expressed their appreciation of Thor being protected, with the overwhelming majority being immeasurably respectful to our visitor.

“At all times the crowd was at least 350 thick, at one point seemingly over 500 people were there with more bodies continually appearing from all avenues, roads, and even bus trips.

“It is estimated several thousand people were in attendance over the whole day, though likely far more.”

It praised the council for agreeing to its request to cancel the fireworks display.

It said: “BDMLR HQ spoke with the local council and liaison officers who explained the situation regarding fireworks to all council members who without reservation agreed the firework display would likely cause stress and alarm to the walrus, and therefore was cancelled without hesitation.

“This was an incredible step forward for animal welfare which has been tremendously backed by the public, official parties and the media.”

Humberside Police Sergeant Jenna Jones said: “Having starting Operation Seabird on the Yorkshire Coast to prevent disturbances to our seabirds and marine mammals it was an unbelievable privilege to support colleagues and volunteers ensuring Thor was healthy & undisturbed.

“I thank the public for keeping your distance & all your questions.

“You certainly tested my walrus knowledge!”

Frog makes 6,000-mile trip from Africa in bag of mint

Please log in or register to upvote this article
NorthumberlandWalrus