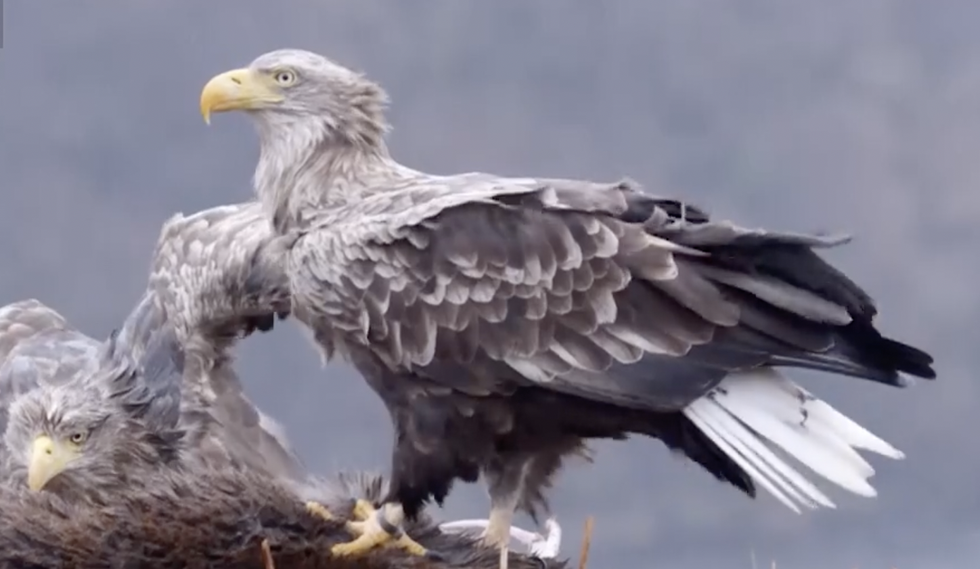 Winterwatch presenter Iolo Williams was left stunned after filming a white-tailed eagle as he discovered the same bird had featured on Springwatch in 2005.

The bird, named Skye after its birth place, was first ringed 28 years ago – officially making it the oldest white-tailed eagle on record, according to the British Trust for Ornithology (BTO).

Describing the species as “huge, seriously impressive birds”, Williams explained to viewers how he had made the discovery.

Speaking live on the BBC Two programme, he said: “We zoomed in on the male and we were able to ring the numbers (on a metal BTO ring), we tried to zoom in on the female but unfortunately we couldn’t read that ring.

“So we got on the phone to Dave Sexton of the The Royal Society for the Protection of Birds (RSPB) who has been working on eagles here on the Isle of Mull for more than 15 years.

“He got in touch with BTO who monitor and give out those rings and they came back to us and said ‘do you know what, that is a very special bird, that bird is a male called Skye.’

Skye featured on Springwatch in 2005 (BBC)

“Way back on Springwatch in 2005 we featured Skye and his partner Frisa throughout that series, we watched them carry food back and forth to the nest and I am pleased to say that both chicks eventually fledged.

The bird, who was captured ripping at deer carcass in the Scottish hills, was ringed as a chick on the Isle of Skye back in 1994, the BTO confirmed.

In the episode, presenter Williams alongside RSPB Scottish officer Sexton attempted to “track down this record-breaking bird”.

Talking about the bird pair, Sexton said: “They have been together and breeding for 25 years and they’ve fledged 24 chicks over that time.”

Having found the birds, Williams added: “It is amazing to think I am looking at the same bird that Springwatch filmed here on Mull 16 years ago, I am happy man.

“How cool is that.

“I remember watching Springwatch in 2005 as a viewer thinking ‘wow those are cool birds’ and here I am nearly 17 years later seeing the birds on Mull for myself, that really is something very very special.”

Rich people eating at IHOP and Applebee's to cope with inflation