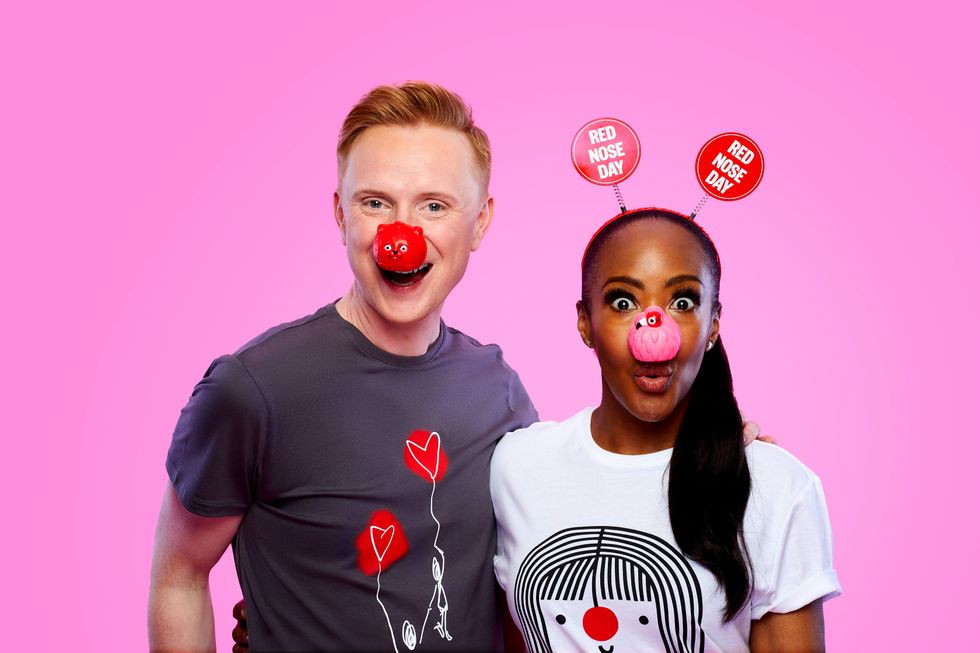 BBC presenters have begun an epic team race across the Lake District to raise money for Comic Relief.

The teams must balance a red nose on a spoon as they make their way across the mountainous terrain, aiming to raise as much money as possible for the charity event.

Penalties are accrued by teams every time the nose is dropped.

Former CBBC presenter Bell leads the Yellow team, along with Sean from Glasgow and Cherrell from London.

Weather presenter Wyn Evans leads the blue team and is joined by Sally from the Scottish borders and Oliver from Eastbourne.

Former CBBC presenter Bell leads the Yellow team, along with Sean from Glasgow and Cherrell from London (Patch Dolan/Comic Relief/PA)

The first day saw some playful sabotage from the yellows and Wyn Evans forget his walking boots for the hiking challenge.

He was forced to begin the first 11-mile trek up steep and slippery slopes in his gripless trainers.

The blues later discovered rocks planted in their backpacks by the yellow team, promising there would be “payback”.

The members of the public joining the BBC presenters have all been supported by Comic Relief previously and are taking part to help give back to the charity.

Oliver, who is profoundly deaf, said he has faced challenges “from the moment I wake up to the moment I go to bed”.

Speaking to Wyn Evans, he said the hardest part of his condition was often the “isolation” that resulted in not being able to hear conversations going on around him but thanked the Elizabeth Foundation, a charity helping deaf children which he is raising money for through the challenge.

You join me, Sally & Oliver on day one of the #RedNoseAndSpoonRace on @BBCTheOneShow! They’re wearing appropriate… https://t.co/D0YXS5Nf2M
— Owain Wyn Evans (@Owain Wyn Evans) 1647285931

The red nose and spoon race will be tracked on BBC’s the One Show in the lead up to Comic Relief on Friday.

Donations to the charity can be made via phone or online.