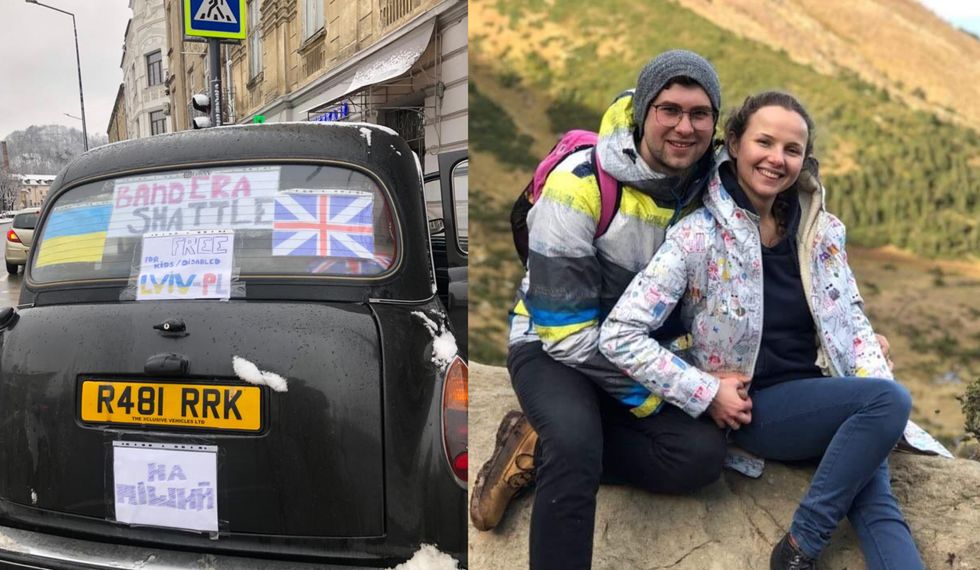 A British-Ukrainian who is helping to evacuate refugees across the Polish border using a London black cab has said he is “doing everything he can”.

Roman Tymchyshyn, 31, has already transported around 80 people including pregnant women, disabled elderly people, children and even a nine-month-old baby.

He began driving refugees in his black cab across the Polish border on February 28, and has since racked up around 2,169 miles – which is around 300 miles a day.

“My employer is very generous and has allowed me one month’s paid leave so I relocated to Ukraine mainly to help people evacuate,” Mr Tymchyshyn told the PA news agency.

“Until they cross the border or reach their final destination the passengers feel frightened but they are sometimes more relaxed when they are gathered together with different families as I form groups of random people.

“They discuss their stories and cry together about the losses or talk about their family members who have been split up.”

Mr Tymchyshyn, who is from Lviv, western Ukraine, travelled back to his birth country with his wife Ulyana Vovk from their home in Portadown, Northern Ireland, after war broke out almost a fortnight ago.

The classic car enthusiast said his black cab is “more comfortable and spacious” which allows him to transport disabled people or enables him to carry up to six passengers.

In addition to the helping refugees flee the war, he has also transported their pets – including a cat, a rabbit, two dogs and a turtle.

“I am doing everything I can to help… giving blood, looking for supplies, transporting goods through the border and fundraising,” he said.

“When you see things like this happening on your TV screen it’s one thing but when you experience it in person… it’s heart-breaking.

“Often children travel without parents and yesterday we had a case when an 11-year-old boy travelled all his way from Zaporizyzya to Slovakia alone – that’s more than 1000km I would imagine.

“Very old people are scared of the bombing and airplanes as some of them experienced World War Two… most of them don’t talk but pray while I’m driving for two hours.”

With the help of his sister Mariya, who lives in north London, Mr Tymchyshyn has also been fundraising to buy a second-hand 4×4 SUV that can be used to evacuate injured civilians on the battlefield.

The siblings have almost reached their target of £3,000 and said any remaining money from the fundraiser will be spent on other necessary supplies.

“Used cars in the UK are more affordable and we have a green light at Polish/Ukrainian border who can let us in without paying any taxes and duties (humanitarian help),” Mr Tymchyshyn wrote on the fundraising page.

Nobody wants to go and war... but I am proud of my country and my people. This fight is very unfair but I am optimistic about the situation.

The pair have found a driver who is willing to transport the car to the Polish border where Mr Tymchyshyn will collect it.

There the vehicle will be checked over by mechanics to ensure it is all in working order before being used on the battlefield.

Mr Tymchyshyn added that he would be willing to “take up a gun” and fight on the frontline “if needed”.

“Nobody wants to go and war… but I am proud of my country and my people,” he said.

“This fight is very unfair but I am optimistic about the situation.”

More information about Roman and Mariya Tymchyshyn’s fundraiser can be found here: https://www.justgiving.com/crowdfunding/support-ukraine-2022?utm_term=83DX4V5Y3

Please log in or register to upvote this article
PA ReadyPolishrefugeesUkraine