Bug hotel and electric vehicles among green developments at Wimbledon 2022 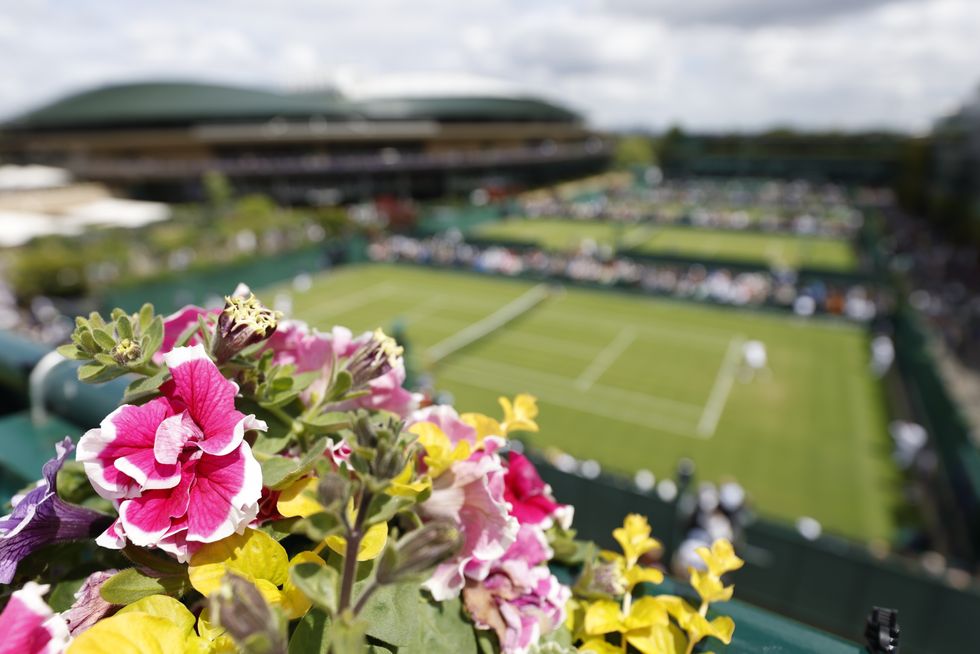 A general view of flowers in front of Court 14 during day two of the 2022 Wimbledon Championships at the All England Lawn Tennis and Croquet Club, Wimbledon. Picture date: Tuesday June 28, 2022.
PA Wire/PA Images - Steven Paston

A bug hotel, electric vehicles and priority plant-based options in restaurants are among the green developments new to Wimbledon this year.

Many features synonymous with the championships have been nature-driven for decades – from its real-grass courts to strawberries sourced from local farms and the hawk trained to clear pests from the grounds.

Sustainability manager at the All England Lawn Tennis and Croquet Club (AELTC), Hattie Park, outlined the green developments new for 2022.

A bug hotel – a construction made of logs to encourage bio-diversity – has been added at one point along the famous Queue for those in the line to observe and enjoy.

Ms Park told the PA news agency: “As you’re in the queue, you’ve got a Centre Court-inspired bug hotel.

“That’s about promoting biodiversity, you need all the bugs and the creepy crawlies at the base of the pyramid to impact the soil, break things down, it’s all part of the web of life.”

Once inside the SW19 venue, fans are greeted by “living walls” covered in flowers designed to attract bees.

During match breaks, revellers can choose to eat in several restaurants, where vegan options are now top of the menu.

Ms Park said: “Lower-carbon options are flagged up on menus and there’s a lot of vegetarian, plant-based foods.

“The plant-based option is always at the top of the menus as well in the public spaces to try and prompt people to try it.”

She added that reusable cups for hot drinks are also a new feature this year and the introduction of clearly-marked recycling bins in previous years has catalysed a more environmentally-conscious mindset among fans.

Ms Park said: “For guests coming to the championships this year it’s really about promoting a culture of reuse, so all of the drinks cups are reusable.

“In 2019 people would present themselves at the bin and just sort of (throw things away).

“In 2021, even after quite a heavy day on the hill, watching people go: ‘that’s recycling, that’s general waste’ – I think all of us have come a long way in terms of understanding what goes where and I’m hoping the colours will make this clear.”

Wimbledon’s electricity is also 100% powered by renewable sources, including the LED lights which have been well-used over Centre Court this year – such as for Sir Andy Murray’s late night defeat on Wednesday.

Some 20 electric vehicles have also been added to the championships’ 150-strong transportation fleet, and the lawnmowers are electric.

Ms Park said she believes a more environmentally-conscious generation of young players like high-profile teenagers Emma Raducanu and Coco Gauff could drive progress in future too.

She said: “I think that as the younger players move up the rankings, there will be a lot more environmental advocates and ambassadors among the player community.”

Former British number one Laura Robson said she believes Wimbledon has “the power to inspire” changes in consumer habits among fans who enjoy its environmentally-friendly grounds.

Speaking at an SW19 environment panel event on Thursday, she said: “Wimbledon is such a huge event, and has the power to inspire other events across the world to adopt more sustainable practices.

“The difference every year when I come back to Wimbledon is huge.

“It’s not necessarily big changes, but small ones that make a big difference.

“I would love to see more players become more vocal on this.

“I know Dominic Thiem is someone who consistently brings this up in press conferences and interviews.

“The more people like that who get involved, the bigger impact we can have across the world.”

Head of Courts and Horticulture Neil Stubley said fewer chemicals are being used on the grass, and the courts need less water thanks to a new steam-sterilising process.

“And it works – pigeons cannot get used to a falcon, so it constantly is effective.”

Fans who recycle Evian drink containers at the championships can also enter a draw to win two pairs of tickets to the Wimbledon 2023 Women’s Finals.

Friends of the Earth campaigner Camilla Zerr has praised organisers’ efforts to make Wimbledon more environmentally-friendly, but said it would be “better still” not to sell plastic bottles at all.

“Deposit return schemes are a step in the right direction, and this one will hopefully see more drinks containers recycled rather than thrown away.

“However, it would be better still not to sell water in single-use plastic bottles in the first place.

“Ultimately reuse is far better for the environment than recycling.

“If we really want to get to grips with the scourge of plastic pollution, we need all drinks containers to be refillable and reusable.

“Drinks companies and the Government must do much more to make this a reality.”

Prince William appears to swear in frustration during Wimbledon

Please log in or register to upvote this article
Wimbledon