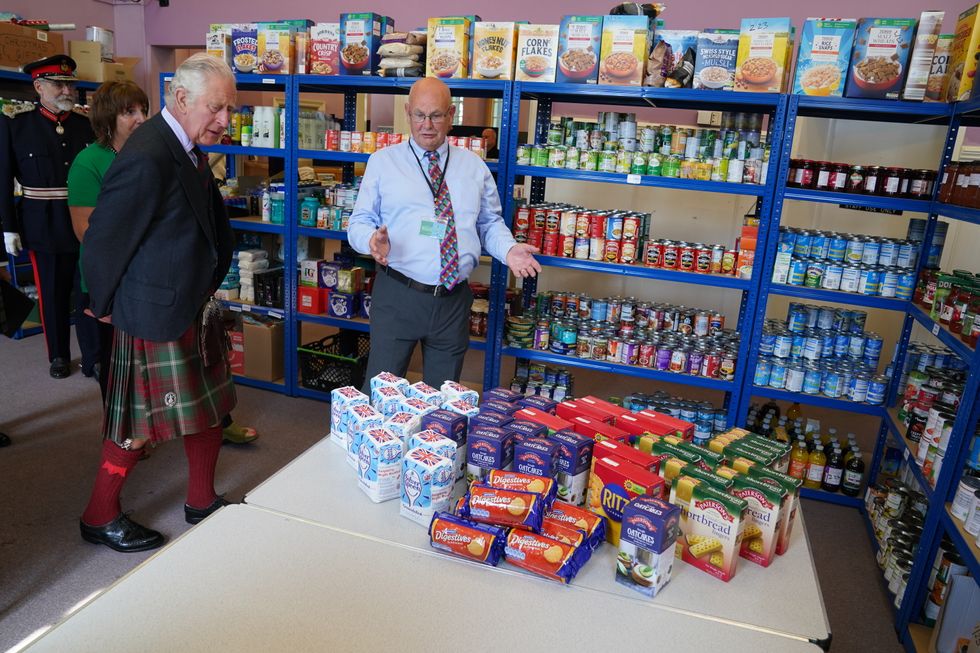 The Prince of Wales, known as the Duke of Rothesay when in Scotland, meets volunteers and supporters of Caithness food bank at Carnegie Library in Wick (Andrew Milligan/PA)
PA Wire/PA Images - Andrew Milligan

The Prince of Wales made a “very generous donation” of items to Caithness Foodbank as part of a visit on Friday.

Charles, known as the Duke of Rothesay when in Scotland, made the donation while at the food bank’s Wick branch based in the former Carnegie Public Library.

The royal met with the food bank’s volunteers and supporters and learned about the vital support they provide to those in need, as well as representatives from a selection of other local community groups.

Pat Ramsay, trustee and volunteer at the food bank, said: “He was very personable to everybody and spent time with us all.

The Prince of Wales, known as the Duke of Rothesay when in Scotland, views food he has donated with Pat and Grant Ramsay (Andrew Milligan/PA)PA Wire/PA Images - Andrew Milligan

“He also gave us a very generous donation of things we were short of, like oatcakes, shortbread, sugar and suchlike.”

Grant Ramsay, her husband and chairman of the Caithness Foodbank, said: “We explained to him what the food bank was, when it was established and how 10 tons of food have been given to folk over the past year.”

Mr and Mrs Ramsay agreed that the royal’s contribution will add variety and diversity to their clients’ food parcels.

Charles was told that the development of food banks in Caithness was made possible by “strong local support” which provided both food stocks and finances, allowing them to flourish and grow.

Mr Ramsay said: “We are incredibly grateful to His Royal Highness for visiting Caithness Foodbank and recognising the incredible contribution of the volunteers in providing people with emergency food, as well as helping people through hardship to a place where they no longer need the food bank’s help.

“High-profile visits such as this can help to shine a spotlight on the issues that are driving people to food banks and build public will to end the need for food banks in the UK.”

The Lord Lieutenant of Caithness, Lord Thurso, introduced Charles to Mr and Mrs Ramsay and accompanied him on his tour of the building as he engaged with representatives from a variety of community organisations and voluntary groups.

Lord Thurso said: “It’s been fabulous to show His Royal Highness how much community volunteering goes on in Caithness.”

He added: “He’s been deeply impressed by the projects and particularly appreciates the heritage aspects.”

Vice Lord Lieutenant of Caithness Willie Watt accompanied Charles and his entourage around the Carnegie building where he met representatives of 17 other community groups from across Wick and east Caithness.

Mr Watt said: “I was there to greet His Royal Highness this afternoon when he arrived off the plane and was part of the team that helped pull together the reception event here.

“I was also part of the team organising the Pilot House and Healing Hub event earlier today.

“There’s a lot of work to get all the details of the people involved with the various groups.

“It worked really well and His Royal Highness was very happy with the extent of the voluntary sector he met today – and that was only a part of it as we could only take a selection of groups from the east side of the county.”

Mr Watt added that the weather was especially notable, with a particularly sunny afternoon after a number of gloomy, overcast days earlier in the week.

“His personable side shone through and he was easy to talk to – it was like talking to a friend and the discussions flowed freely. He’s a very special guy and we’re very lucky in that he spends quality time in Caithness every year,” he said.

Charles spent more than 90 minutes at the Carnegie building before exiting into bright sunshine and being greeted by well-wishers assembled outside on Sinclair Terrace.

Local MP Jamie Stone said: “I think having Prince Charles, the Duke of Rothesay, here today is something very special.

Please log in or register to upvote this article
Prince CharlesRoyalScotland