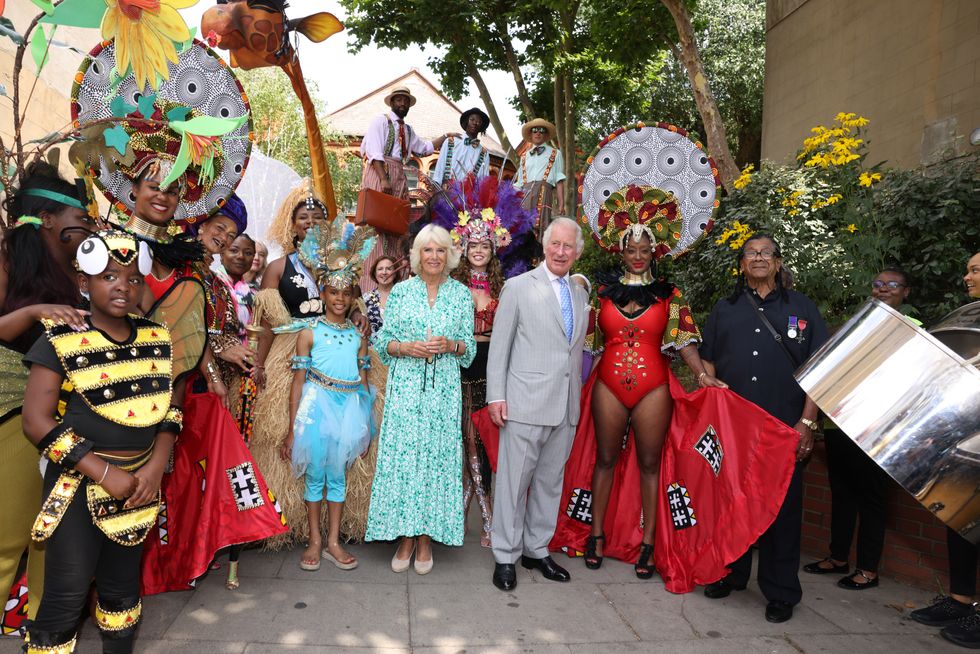 The Prince of Wales got into the mood for the Notting Hill Carnival by playing a steel pan and listening to a booming sound system.

Charles could not resist trying his hand at the musical instrument, but joked “I’m not much cop at this” during a visit to a cultural centre to celebrate the return next month of the carnival after three years.

The Duchess of Cornwall joined her husband for the visit and Camilla, who is patron of the Fan Museum, kept the sweltering temperatures at bay with a handheld fan.

At one point she told a group of steel pan players: “If it had been cooler we could have had a jolly good dance.”

The couple were treated to a flavour of the famous street party when they were welcomed to the Tabernacle by stilt walkers, performers in extravagant outfits and musicians playing the famous steel pan.

Speaking afterwards about the attraction of performing at the carnival, Claire said: “For me it’s the heritage, I’m just so proud of it and the culture, the representation, the way that we can just be – and be proud – and the party vibe and the community spirit.”

On display outside were sculptures made from wire frames and chicken wire by artist Carl Gabriel, including his 8ft tall head and shoulders creation of the Queen wearing a crown, which was part of the Platinum Jubilee celebrations in June.

Hundreds of performers from the Notting Hill Carnival community including Calypso singers, and a huge steel pan orchestra, took part in the celebrations outside Buckingham Palace.

Mr Gabriel said: “I talked to the prince about my sculpture of the Queen because he saw it at the Platinum parade and he was very excited about it – he loved it.”

The venue for the event was the Tabernacle, a former church, in Powis Square in the heart of Notting Hill, whose community found its voice after race riots in the 1950s.

In 1966, the first outdoor festival took place in Notting Hill after Rhaune Laslett, a local resident and social worker, organised the celebration for local children and today it is Europe’s biggest street event.

Inside the Tabernacle, Charles was fascinated by the recreation of one of the early sound systems used in the 1960s by the DJs, who would connect towering speakers to powerful amplifiers to play the music of the day to carnival crowds.

DJ Gladdy Wax, real name Gladwin Wright, chatted to the prince – a long-time supporter of carnival, who asked “Who is it playing?” and was told its was The Skatalites’ version of The Beatles song This Boy.

During a tour of a photographic exhibition about Notting Hill and the carnival, Charles tried playing a steel pan after being told about its history.

Later he and Camilla met Melissa Simon Hartman, costume designer for the Royal Shakespeare Company’s production of Much Ado About Nothing, who began her career creating carnival outfits.

Matthew Phillip, chief executive of the Carnival Village Trust, who hosted the royal visit, said afterwards: “It’s the biggest celebration of black culture on the planet and something we should all be proud of.

“It mainly celebrates black culture but it’s welcoming to all cultures and people from all backgrounds, all religions, race, gender, sexual orientation – it’s a real coming together.”